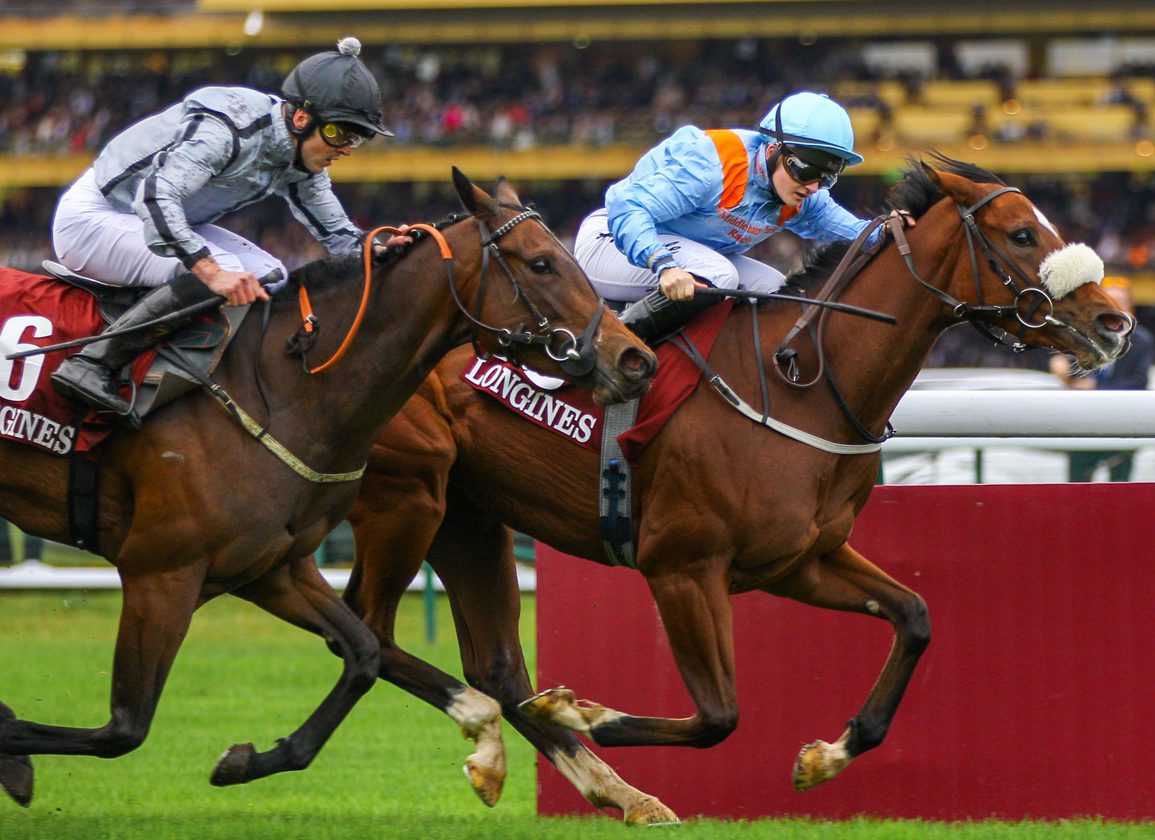 There had been no 5-year-old mare to win the Arc until just after 4 o'clock on Sunday and no juvenile to prevail in the G1 Prix de l'Abbaye de Longchamp Longines since 1978, but both droughts are now officially at an end after Middleham Park Racing's The Platinum Queen (Ire) (Cotai Glory {GB}) made it happen in the ParisLongchamp sprint.

Atoning for a heartbreaking defeat on her beloved Nashwa (GB) (Frankel {GB}) in the preceding G1 Prix de l'Opera Longines, Hollie Doyle made full use of Richard Fahey's dynamo's relentless pace to shake off all pressure and hold White Lavender (Ire) (Heeraat {Ire}) by a short neck, with Coeur De Pierre (Fr) (Zanzibari) a neck behind in third.

“It was never in doubt really–I thought it was a pretty dominant performance and Hollie said she idled a little bit in the last 100 yards,” Middleham Park Racing's Tom Palin said of the 7-5 favourite. “It was a 'Win and You're In' for the Breeders' Cup and being a tight northerner, that's great as it means we don't need to pay the entry fee! As long as the filly comes out of it alright, then I think we'll look forward to going to America if they'll have us.”

The Platinum Queen's journey to Paris was not an easy one, with three successes in rapid times involving a juvenile course record-setting win at Goodwood July 27 before meeting Highfield Princess (Fr) (Night Of Thunder {Ire}) in the G1 Nunthorpe S. at York Aug. 19. Second only to that huge talent, the bay stretched Trillium (GB) (No Nay Never) to the limit next time in the Sept. 11 G2 Flying Childers S. at Doncaster, losing out close home and while that peer flattened out next time in the Cheveley Park, The Platinum Queen emerged from that battle stronger.

Shadowing Mo Celita (Ire) (Camacho {GB}) throughout the first 1 1/2 furlongs before her natural speed saw her move on from that compatriot, she was there to be shot at as she has been throughout most of her brief career and as White Lavender loomed late, a gallant surrender would have been excusable. Despite lugging towards the rail as the line neared, the 2-year-old refused to buckle and was extending again yards after the finish.

Clifford Lee said of White Lavender, “We were a bit unlucky, because we were giving away so much weight to the winner. My horse was very brave to have run such a race because we went extremely fast.”

Coeur de Pierre's trainer Mauricio Delcher Sanchez added, “There is nothing else he could have done and he had an excellent trip through the race. We have finished third and we are happy, his year is finished now. He will go off for a break to Haras de Grandcamp, where he was born. We will hopefully have him back in April to prepare for a new season.”

The Platinum Queen, who becomes the first Group 1 winner for her second-crop sire, is the first runner for the dam Thrilled (Ire) (Kodiac {GB}), who is kin to the listed-placed The Gold Cheongsam (Ire) (Red Clubs {Ire}). The second dam is the listed-placed Fuerta Ventura (Ire) (Desert Sun {GB}), who is in turn a half to the Listed Ripon Champion Two-Year-Old Trophy winner and G2 Mill Reef S. runner-up Sir Xaar (Ire) (Xaar {GB}). From the family of the dual G1 Irish St Leger hero Oscar Schindler (Ire) (Royal Academy), Thrilled's yearling colt by Galileo Gold (GB) was a £170,000 purchase by Richard Spencer for Phil Cunningham at last month's Goffs UK Premier Yearling Sale, while she also has a colt foal by the same sire.

Hollie Doyle is at it again – winning the Prix de l'Abbaye on 2yo The Platinum Queen for @MprUpdates & @RichardFahey. pic.twitter.com/BOxgVltvuE