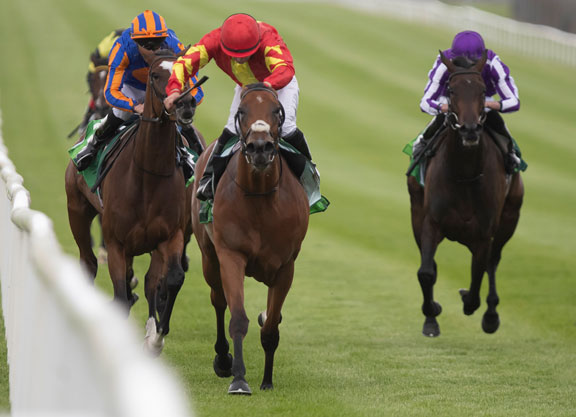 Coolmore has extended their support of the G1 Matron S. at Leopardstown during Irish Champions Weekend, Leopardstown announced on Monday. The race, which has twice been voted the highest-rated race for fillies and mares by the Longines World Thoroughbred Rankings, will be officially known as the G1 Coolmore America Justify Matron S. Coolmore’s Ashford Stud in Kentucky stands two Triple Crown winners, American Pharoah (Pioneerof the Nile) and Justify (Scat Daddy). The 2019 edition of the Matron was landed by Iridessa (Ire) (Ruler of the World {Ire}).

“Coolmore are delighted to be maintaining all of our Irish race sponsorships at pre-covid levels including the flagship Coolmore America Justify Matron S.,” said Coolmore’s David O’Loughlin. “American Pharoah has already enjoyed fantastic success on both sides of the Atlantic with his first crop and as the best son of Royal Ascot phenomenon Scat Daddy, we expect the same from Justify in due course.”

Added Tim Husbands MBE, Leopardstown CEO, said, “We are very grateful for the continued support of Coolmore with their sponsorship of the Coolmore America Justify Matron S. This race is a highlight of Longines Irish Champions Weekend and is consistently one of the leading fillies and mares’ races in the world. The success of Longines Irish Champions Weekend would not be possible without our partners and Coolmore are an integral part of this.”