Constitution's We the People Takes Flight in Peter Pan 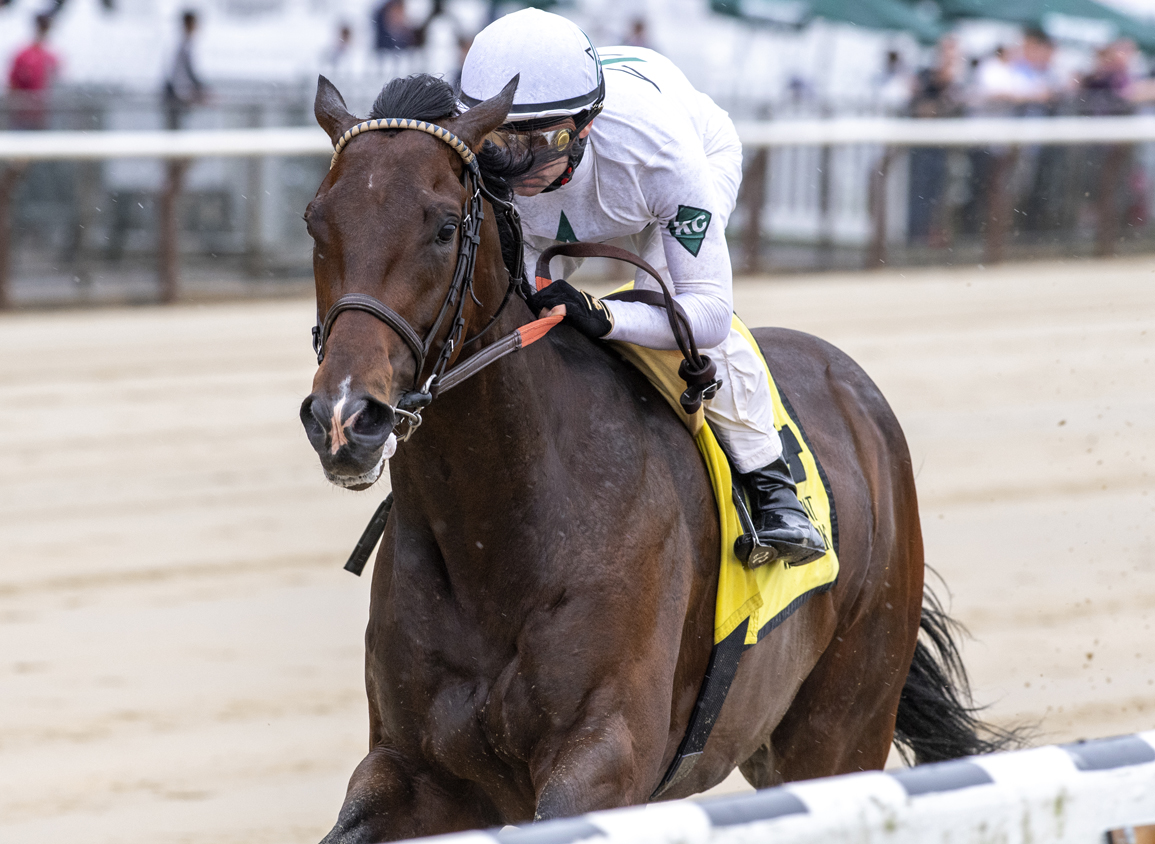 We the People | Joe Labozzetta

'TDN Rising Star' We the People (Constitution) put on a show for those that braved the rain at Belmont Saturday–and the fans watching at home–with a dominant and seemingly effortless victory in the GII Peter Pan S., the local prep for the GI Belmont S. June 11.

Dispatched as the 5-2 second choice behind 2-1 favorite Set Sail (Malibu Moon), We the People broke alertly and hustled up to take immediate control. Clicking off opening splits of :23.46 and :47.24 on a clear lead, the bay was still well within himself under a motionless Flavien Prat turning for home. Prat shook the reins at the colt at the top of the lane and We the People instantly responded, opening up on the field with ease to win for fun by 10 1/4 lengths. Golden Glider (Ghostzapper) was the runner-up with Electability (Quality Road) in third. Favored Set Sail never made any impact, finishing sixth.

“[In the Arkansas Derby] Everyone broke well and all sent [for the lead] so I found myself wide and had to take back, drop in, and he didn't understand what I wanted from him from that point on,” Prat said. “Today, he broke well and got me into the race. I wanted a clean trip and to be in the clear and see what he could do from there. He responded really well.”

“We know how good he is,” said winning trainer Rodolphe Brisset, who also saddled fourth-place Western River (Tapit). “He's just his own enemy sometimes because he's a little cocky. Today was good. He got a little warm in the paddock and we gave him a shower and you could see he kind of relaxed and was drying up. I thought the warmup was good compared to Arkansas. Of course, if we bring one all the way here it's because we thought he had a shot to do that. He can run on anything. He's one of those kind.”

As for running one or both of his pupils in the Belmont, Brisset said, “We [brought] both here to see if we could consider the Belmont. Obviously, We the People passed the test and I think I'll have to watch the replay and take my time and wait 10 days to decide on Western River. He only got beat [less than] a half-length for second. I don't think the race set up for him too because they went in :47 1/5 and it wasn't really fast enough to make that big kick. We know the two turns may be the key, too, for Western River.”

A $110,000 KEENOV weanling turned $220,000 KEESEP yearling, We the People summoned $230,000 from WinStar at the Fasig-Tipton Gulfstream Sale after breezing in :10 3/5 as part of the dispersal of the estate of the late Paul Pompa. He is the third former Pompa horse to win a graded stakes this year, following G1 Dubai World Cup winner Country Grammar (Tonalist) and GI Jenny Wiley S. victress Regal Glory (Animal Kingdom).

Graduating by 5 3/4 lengths going a mile on debut at Oaklawn Feb. 12, We the People earned the 'Rising Star' nod when repeating that effort in an Oaklawn optional claimer exactly one month later. Attempting to get on the GI Kentucky Derby trail, he ran in the Apr. 2 GI Arkansas Derby–his first start without Lasix–but failed to fire, finishing seventh.

Pedigree Notes:
We The People is the second son of Constitution to win the Peter Pan, following 2021 victor Promise Keeper. He is the 21st worldwide graded winner (13 NH & 8 SH) and 34th worldwide black-type scorer (22 NH & 12 SH) for the young WinStar phenom. The colt is also the 29th graded victor and 54th black-type winner out of a daughter of the pensioned Tiznow. We the People is bred on the same Constitution/Tiznow cross as the stallion's best son, Tiz the Law, whose quartet of Grade I wins includes the Belmont S., albeit that was the year it was run at 1 1/8 miles as the first leg of the Triple Crown in 2020.

The Barbe family's Henley Farms acquired Letchworth for $40,000 at the 2019 Keeneland January sale with We the People in utero. She has since produced a juvenile colt by Always Dreaming, who brought $220,000 at the recent OBS April Sale, and a yearling colt by Audible. She was bred back to More Than Ready.