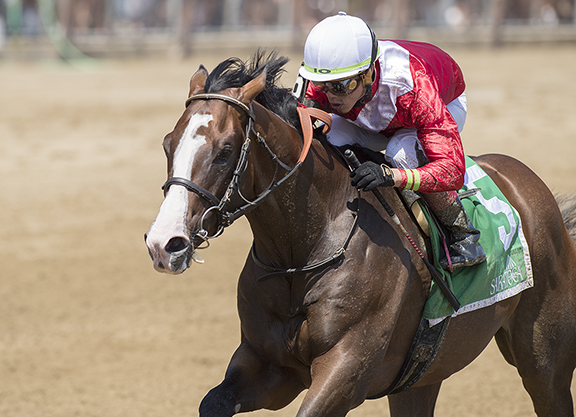 By Your Side | Sarah Andrew

By Your Side took serious and somewhat surprising tote attention to go off as the chalk in Saturday’s GII Sanford S. at Saratoga, and the flashy colt ran to the money to become the first black-type winner for his first-crop sire (by Tapit). Breaking on top from the outside post five, the blaze-faced bay tracked speedy Tomato Bill while out in the clear through splits of :22.60 and :46.19. He came to tackle the frontrunner in the lane, and wore him down by midstretch en route to a comfortable tally. Tomato Bill dug in to cross the wire second ahead of California invader Raging Whiskey while closing off the rail and squeezing that one out late. The stewards looked at the incident, but ruled that it did not impact the order of finish.

“I got a perfect trip,” said winning rider Irad Ortiz, Jr. “I had the outside post and he put me in a good spot early. He broke good on top. The speed went and he was second. He was acting like a professional. He relaxed so well and when I asked him to go, he just turned on.”

By Your Side took his Churchill debut by a nose June 14–third that day was subsequent GIII Bashford Manor S. show horse Verb (Dialed In). Conditioner Eddie Kenneally, who had an extremely strong Churchill Downs spring meet that saw him win at a 30% clip, took the 2016 GIII Sanford S. here with ‘TDN Rising Star’ Bitumen (Mineshaft), who was also a first-out winner in Louisville.

“He’s shown that he’s the real deal for a while,” Kenneally said of By Your Side. “He’s a very professional horse. He just does everything right and relaxed nicely after breaking quick. Irad allowed the speed horses to go on out, and the horse was content to relax on the outside. Perfect position [and] beautiful ride. He’s good, but might be even better going long.”

The Irishman added, “He came to me at Keeneland in April and just continued on from there. He never did anything wrong. He has a very efficient, long stride, and his pedigree says that he wants to go longer. The way he relaxed will help the horse go longer as well.”

By Your Side is one of five winners thus far for Constitution, who has been off to one of the hotter starts with his juveniles among 2019 freshman, having also already produced a pair of ‘TDN Rising Stars’. A debut winner himself at the beginning of his sophomore season, the $400,000 Fasig-Tipton Saratoga acquisition and ‘Rising Star’ bested none other than future MGISW Tonalist (Tapit) to take a two-turn Gulfstream allowance before annexing the 2014 GI Florida Derby. He annexed the following year’s GI Donn H. over Lea (First Samurai). Both Tonalist and Lea are also members of this loaded freshman sire crop.

Dam Revered, who was third sprinting both on the dirt and synthetic in her best career finishes, was a $300,000 yearling. She cost $50,000 at the 2017 Keeneland January sale while carrying By Your Side. A daughter of SW Lady Tap (Pleasant Tap) and half to SW/GSP Lady’s Laughter (Distorted Humor), Revered produced a Temple City filly last year and a Dialed In colt Apr. 21.