Conquest Farenheit All the Way in Pasadena 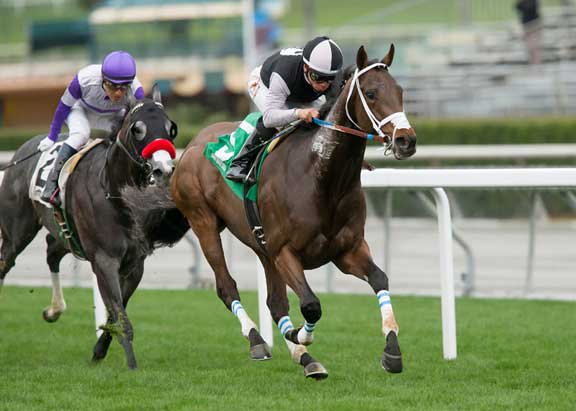 Conquest Fahrenheit made it back-to-back stakes wins at Santa Anita, setting a strong pace and holding firm in the stretch to capture the Sunday feature. A five-length winner on debut Aug. 26 at Woodbine to earn 'TDN Rising Star' status, the bay was a good second in the GII Summer S. in his final start for the Mark Casse barn and was hammered down for $735,000 at the Keeneland November Conquest Stables dispersal. Finishing a disappointing third on the local dirt Feb. 2 in his first start for these connections, the bay responded when returned to grass by annexing the Baffle S. going down the hill here Feb. 20. Tabbed as the chalk to double up here, Conquest Farenheit was put on the front end by Norberto Arroyo, Jr. and was pressured through strong fractions of :22.94 and :45.59 by Cistron. Disposing of that pursuer by the top of the lane, the favorite appeared ripe for the picking by previously unbeaten Taco nearing the eighth pole, but had something in reserve and stayed on strongly to score decisively. The winner has a 2-year-old half-sister by Archarcharch and a yearling half-brother by Line of David. Holy Smokie was bred to Fast Anna last spring.