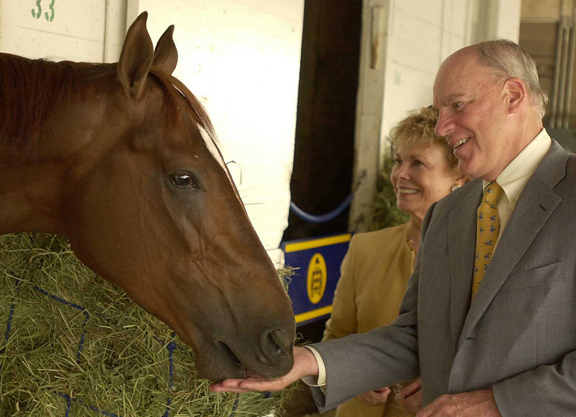 The late Bob and Janice McNair with Congaree | Michael Marten

Congaree (Arazi–Mari's Sheba, by Arazi), a Grade I winner at seven, eight, nine and 10 furlongs, was euthanized due to the infirmities of old age Nov. 22, according to a release from Valor Farm in Texas. He was 22 years old.

Congaree was owned and bred by the late Robert McNair and his wife Janice's Stonerside Farm and barely survived his foaling, weighing in at a sizeable 152 pounds, suffering several broken ribs in the ordeal.

Eventually put into training with Bob Baffert, Congaree won the 2001 GII Wood Memorial S. and was third in the GI Kentucky Derby after setting a blistering pace. His one-mile split remains the second-fastest in the history of the race. Third to his stablemate Point Given (Thunder Gulch) in the GI Preakness S., Congaree would go on to win the GI Swaps S. later that season. The chestnut added a second Grade I in the 2002 GI Cigar Mile H., and after missing by a head in the 2003 GI Santa Anita H., cut back to seven furlongs to annex the GI Carter H. He defeated Harlan's Holiday by three lengths in the GI Hollywood Gold Cup over a mile and a quarter and became the only two-time winner of the Cigar Mile later that year, scoring by 5 1/4 lengths. He was one of just a handful of horses retained by the McNairs after they sold the majority of their Thoroughbred holdings and farm to Sheikh Mohammed in 2008.

Initially retired to Adena Springs, Congaree was later transferred to New York and ultimately Texas. He is the sire of 13 stakes winners to date, six at the graded level, includine Grade I winners Jeranimo, Don't Tell Sophia and Killer Graces.

“Congaree was such a special horse,” said Janice McNair. “I am so grateful for all the many happy memories Congaree gave us. He was so unique, and had the most loving personality. He was a delight to be around, and it was always such a thrill to watch him run. Congaree was truly the horse of a lifetime for us.”

Added John Adger, longtime advisor to the McNairs: “Congaree was the epitome of what we hoped to accomplish with the Stonerside breeding program. It was fitting he

was our first Grade I homebred, as his dam and granddam were part of the purchase of the Elmendorf broodmare band of Jack Kent Cooke in 1997–an acquisition we considered the cornerstone of the breeding program. Congaree, in fact, earned back nearly the entire cost of that investment with his race

earnings. He always gave 100% in every race. He was an Eclipse Award finalist three times–Horse of the Year, Champion Sprinter, and Champion Older Horse.”

Congaree has been laid to rest in the cemetery at Valor Farm, shared by many of the great horses owned and raced by the Scharbauer family. Doug Scharbauer purchased Valor Farm from the estate of his late father Clarence in 2016.