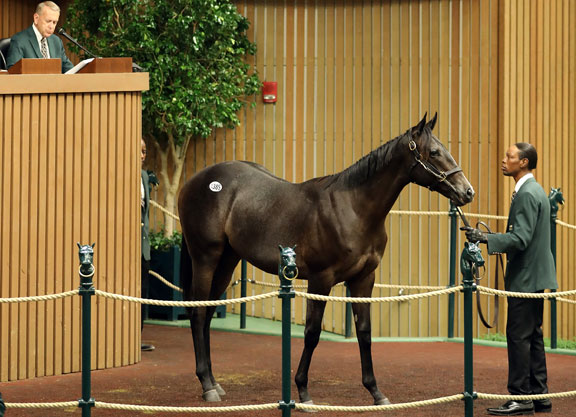 Session-topping Hip 1385 in the ring | Keeneland

A pair of yearlings topped the $500,000 mark Sunday, with a colt by Quality Road attracting the session’s highest bid of $510,000. The session topper was consigned by Select Sales and WinStar Farm’s Elliott Walden made the winning bid on behalf of a partnership with the farm and China Horse Club International.

WinStar has been active as both buyers and sellers this week at Keeneland.

“It’s been solid on both sides,” Walden said. “It’s tough to buy and conversely, it’s good when you sell. I think it’s a healthy market. Looking at the dynamics of everything in the industry, there is not a better time that I can remember to be an owner in the industry because of the purses. You’re running for $130,000 at Kentucky Downs, $90,000 at Saratoga. The expenses had to go up a decade ago, just because hay, feed, labor, everything’s gone up. But now the purses are catching up. It’s a good time to be in the horse business, I think. Just from an economic standpoint.”

Select Sales sold 19 yearlings Sunday, including the session-topping Quality Road colt, for a gross of $2,850,000.

“The great thing about Book 3 is that the horses that hit the target are selling and the horses that don’t hit the target are also selling,” Select Sales’ Carrie Brogden said. “There is more depth of buyers and also my owners are being more realistic in selling their horses. If I say, ‘This horse has this, this and this,’ we are adjusting the reserves. People are wanting to trade.”

“We have bought 10 so far and we got most of them on the first two days, which I am delighted about,” said Ocala horseman Eddie Woods. “But we’ve been scrambling ever since. We got three today and one yesterday.”

Of the increased participation from pinhookers, Woods said, “That the way it’s supposed to be. The quality kind of drops off, the big planes have left. It’s always been the time when the tide has turned. It won’t be a great sale if you have pinhookers in there the first two days just banging away any time they want. Then it’s not good. But it’s been a great sale so far and for the better horses, it’s going to hold all the way through.”

The Keeneland September sale continues through next Sunday with sessions beginning daily at 10 a.m.

A colt by Quality Road (hip 1385) shot to the top of the leaderboard early in Sunday’s session of the Keeneland September sale when bringing a session-topping final bid of $510,000 from WinStar Farm CEO Elliott Walden. WinStar purchased the yearling in partnership with China Horse Club International.

“He’s a nice athletic colt by Quality Road,” Walden said of the yearling’s appeal. “We felt like he was one of the better ones on the day.”

Hip 1385, bred by Machmer Hall and consigned by Select Sales, is out of Spring Storm (Unbridled’s Song). He is a half-brother to multiple graded placed Stainless (Flatter).

Spring Storm, in foal to Proud Citizen, sold for $29,000 at the 2016 Keeneland November sale. The 12-year-old mare, whose second dam produced champion Countess Diana, has a weanling colt by Malibu Moon and was bred back to West Coast.

“We bought her before Stainless was graded placed,” explained Select Sales and Machmer Hall’s Carrie Brogden. “This colt jumped through all of the hoops. He had great vetting. He was very uncomplicated and he was just one of those horses that got better and better as he got older.”

Brogden said Machmer Hall has built its brand at the sales and on the racetrack.

“This if the first sale where people have specifically said to me, ‘Ah. This is a Machmer Hall horse. We know you’ve raised it as a runner,'” Brogden said. “That makes me feel really good.”

A filly from the first crop of Grade I winner Frosted will be joining the barn of Ken McPeek after the trainer bid $500,000 to acquire the youngster on behalf of Scott and Dana Leeds’s Walking L Thoroughbreds Sunday at Keeneland.

“She was the best filly of the day, in my opinion,” McPeek said as he watched on his phone while one of his charge’s headed into the gate at Churchill Downs. “We got one early, as well, and I’m really thrilled to take her home.”

The yearling was McPeek’s seventh purchase of the September sale. He also purchased a colt by Frosted (hip 1487) Sunday for $180,000.

Hip 1578 was bred by Runnymede Farm, Peter Callahan, Manlius Stable and Bill Oppenheim, and was consigned to the sale by Runnymede Farm. She is out of Dream to Dream (Scat Daddy), who is a full-sister to group winner Daddy Long Legs.

“She was a very well-balanced individual with a great walk and a great mind,” said Runnymede vice president and general manager Romain Malhouitre. “She came here and never put a step wrong along the way. She was very busy in the barn. Did we expect that? No. But we liked her all the way.”

The breeding partnership purchased Dream to Dream for $60,000 at the 2016 Keeneland November sale.

Malhouitre agreed 2011 G2 Royal Lodge S. winner Daddy Long Legs’s presence in the pedigree was part of the mare’s appeal, but added, “It was the individual as well. And being by Scat Daddy. Our partner Bill Oppenheim just pointed out to us that she was in the sale and we went to see her and we liked her. She is a compact, well-made Scat Daddy.”

“In the beginning, we didn’t know what we wanted to do,” Malhouitre explained. “Frosted was quite popular, so we tried to see if we could flip her and make money, but the market was not having it. So we were happy to just keep her.”

Dream to Dream produced a filly by Animal Kingdom this year and was bred back to Will Take Charge.

Runnymede Farm had further success Sunday, selling a filly by Liam’s Map for $300,000 to Team Casse. The yearling (hip 1619) is out of multiple stakes winner Half Heaven (Regal Classic). Bred by Dixiana Farms, she RNA’d for $70,000 at last year’s Keeneland November sale.

“I raised her half-sister Highestmaintenance (Macho Uno) when I was at Dixiana and bought her from Mr. [William] Shively at the November sales,” Malhouitre said. “He was very kind to sell her to me. She’s another one with a great walk and a great mind. Those two fillies have been unbelievable the last three days at the sales.”

Both Runnymede fillies were by first-crop sires.

“We have to balance things,” Malhouitre said. “With young mares, we do different things. We go unproven, proven, unproven, proven. We would like to breed everything on the top, but value wise, it’s not possible for all the mares. So we are trying to have good balance between proven sires, the ones on the bubble, and the freshmen. We think it’s good for all of us. We have the land and the team at Runnymede who help us to develop some very good horses. So, it works.”

Runnymede chief executive officer Brutus Clay, III, standing nearby as Malhouitre spoke, added, “We also have to thank our general manager and the whole team at the farm, as well as the bidders and underbidders.”