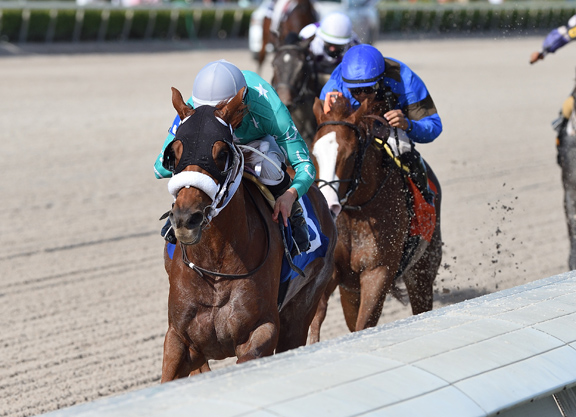 John Minchello's Competitive Speed (Competitive Edge) will put her three-race win streak on the line when she makes her debut in graded company in Saturday's GIII Forward Gal S. at Gulfstream Park.

“This is going to be a big test, but I think she can make it,” trainer Javier Gonzalez said. “She's doing good and she is one of those horses that is never going to make you look bad,” he added. “I think she's going to run a very good race.”

Competitive Speed, sixth facing open maidens in the Gulfstream West slop Oct. 31, graduated by 1 1/2 lengths against $25,000 maiden claimers at Gulfstream West Nov. 12, beating a pair of next-out winners in the process. Shipped to Gulfstream for her next start Dec. 6, the chestnut came from off the pace to take a starter optional claimer by 4 1/2 lengths, then stepped up to add the 6 1/2-furlong Glitter Woman S. Jan. 2.

Competitive Speed, who failed to meet her reserve as a yearling at Keeneland in the fall of 2019, sold for $5,000 the following season at OBS in July.

Competitive Speed has breezed twice at Gulfstream West since the Glitter Woman, including a half-mile in :48.40 Jan. 16, third-fastest of 18 horses. Leonel Reyes will ride back from Post 3 in a field of eight.

“It was a little bit faster than I wanted, but she came back good. The next day she ate everything and she was happy,” Gonzalez said. “She's coming into the race really well.”

“She was very impressive in her debut and she's trained great since then,” Todd Pletcher said. “Ideally, I'd kind of like to run her in an allowance race, but we don't really have an option at the moment. Considering how well she ran at the distance and over the surface here, we'll give it a try. The seven furlongs was no problem in her debut.”

Luis Saez, up for her debut, gets the return call from Post 7.

Also one to watch is Coach Jer's Joy (Palace), who earned the top spot over a field that included Competitive Speed in the aforementioned Gulfstream West maiden Oct. 31. Trained by Saffie Joseph Jr., the chestnut will be joined by freshly anointed Eclipse award winning rider, Irad Ortiz Jr.