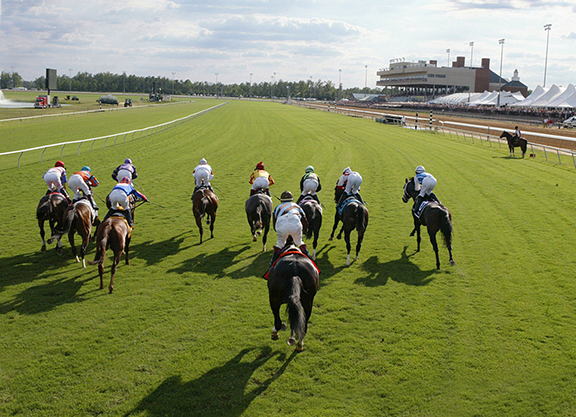 For many, the impending return of structured racing to Virginia at Colonial Downs in New Kent evokes stirring memories of a horse culture firmly embedded in the Commonwealth's history. On a personal level, I cannot help but harken back to my days as a track and field athlete at the College of William and Mary in the heart of Colonial Williamsburg, when I would routinely pair 18-mile training days with evening trips to a musty OTB down the road in Hampton to bet Penn National and Charles Town. I'd often drag my teammates with me in hopes of sparking their interest in a game I developed a passion for early in life.

Little did I know at the time, but back in Williamsburg, the origins of Virginia's horse racing tradition were right beneath our feet. Quarterpath Road, a heavily wooded trail situated on the southeast edge of town–and the nexus of one of our most popular running routes–was the location of some of the first organized horse racing during the colonial era. The events would command the attention of the entire town, often taking place over the span of a week and sometimes lasting up to four miles in duration (although the “Quarterpath” name is a nod to the short sprints that were also conducted on the grounds). Match races were common, and the purse money was put forth by race participants.

A 1989 article in the Hampton Roads Daily Press notes, “Nothing remains of the local track where George Washington and others watched the races, except the name 'Quarterpath Road' on the east end of Williamsburg. There, on a narrow road lined by modest houses, Tidewater planters raced horses.”

A circular mile-long track was eventually developed in the vicinity and by the mid-1730s, race meets were being held every Saturday from spring through fall. As the colonial era drew to a close, even visitors who were well-acquainted with the English turf were impressed by the quality of the Thoroughbreds competing in Williamsburg's races.

“Very capital horses are started here, such as would make no despicable figure at Newmarket,” observed J.F.D. Smyth in his travelogue A Tour in the United States of America. “Nor is their speed, bottom or blood inferior to their appearance; the gentlemen of Virginia sparing no pains, trouble or expense in importing the best stock, and improving the excellence of the breed by proper and judicious crossing.”

Racing, in fact, became so popular in Williamsburg that students at William and Mary had to be issued a warning about training racehorses. While the College's founder and first president James Blair was a known supporter of racing, the faculty was eventually compelled to clamp down on students as race meets were continually held in their backyards.

“No scholar belonging to any school in the College, of what age, rank, or quality, [what]soever, [should] keep any race horse at the College, in the town–or any where in the neighborhood,” the William and Mary administration cautioned. “[They should] not in any way [be] concerned in making races, or in backing or abetting those made by others; and all race horses kept in the neighborhood of the College, and belonging to any of the scholars, [should] be immediately dispatched and sent off and never again brought back.”

When considering the history of the Thoroughbred in Virginia, many minds gravitate to the legendary career of Virginia-foaled Secretariat and his iconic owner Penny Chenery. Or perhaps one conjures images of the quaint and enduring steeplechase tradition in the northern reaches of the Commonwealth. These are the bonds that tether Virginia's horse culture from the colonial era to the present day.

The latest incarnation of racing in Virginia comes thanks to the initiative of a new ownership group at Colonial Downs in Rosie's Gaming, with a generous purse structure, low takeout, evening post times and the lure of a lush, wide turf course adding to the appeal. Vice President Jill Byrne–a native Virginian who grew up riding racehorses in Montpelier–noted the significance of the track ending a six-year hiatus of flat racing in Virginia.

“Being part of this comes with a great sense of pride in the state that I call home,” said Byrne. “Thoroughbred racing in the United States started in Virginia when they came to the shores here, and it's had a very long history. Racing was dormant for six years in a place where it has such an esteemed history and background–for it to come back is not only a big win for Virginia's Thoroughbred industry, but the Thoroughbred industry in general…It's going to revive what used to be a very robust breeding industry.”

With the prospect of an expanded schedule in coming years, Colonial Downs appears here to stay, writing the latest chapter in a storied history.

“We'll definitely expand for next year, somewhere between 20 and 30 days,” said Byrne, who added that the return of racing has a far-reaching impact on the local economy.

Whether it is the spirit of hot-blooded colonial steeds bounding down the streets of Williamsburg or a full field of turfers competing on the aptly named Secretariat Turf Course in New Kent, the legacy of racing in Virginia is alive and well. So I return to those long, taxing days of training on Quarterpath Road–footprints replacing hoofprints–but nevertheless indicative of a lasting connection between humans and horses in Old Dominion.