Colonel Liam's Pegasus a Win for All Connections

The journey from Missouri to Hallandale Beach proved to be more than worth it for owners Robert and Lawana Low when they watched their speedy gray colt Colonel Liam (Liam's Map) flash past the wire to win the $1-million GI Pegasus World Cup Turf.

While Robert Low said they were confident going into the Pegasus, they were unconvinced that the newly-turned 4-year-old had to win by a landslide in order to be considered a top contender in his division.

“I think it was a really nice field,” he noted. “There were some really nice horses with some good numbers, but he didn't disappoint.

While the Lows enjoyed the victory from the winner's circle, another couple celebrated from their farm in Ocala.

Colonel Liam became a dream come true for Ron and Suzanne Fein when he was their first seven-figure pinhook in 2019.

“He came on like gangbusters,” Ron Fein said of the race with enthusiasm. “It was terrific- just beautiful movement. I had always been thinking dirt, so he surprised me. I think he'd be good on dirt or turf; He's just a superhorse.”

The Feins have been pinhooking both weanlings and yearlings for 22 years at their Superfine Farms in Ocala. Throughout their journey in the business, they've worked closely with Ciaran Dunne of Wavertree Stables. Fein credits Dunne for finding Colonel Liam at the 2018 Keeneland September Sale.

“He saw the horse and asked if I liked him,” Fein recalled. “I thought he was a nice-looking colt. He had good conformation and looked like he was going to be quick, but I didn't think he was anything special, special.” 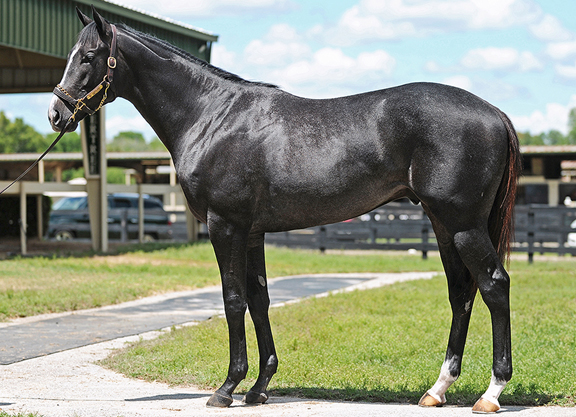 Colonel Liam sells for $1.2 million with the Wavertree consignment at the 2019 OBS April Sale. | Wavertree Stables

After signing the ticket for $50,000, Fein brought the colt home to Superfine Farms, where he and his wife break six to eight yearlings each year.

By the time Fein delivered the colt to Wavertree in the weeks leading up to the OBS April Sale, the youngster had been transformed.

“When we took him over to Ciaran, his eyes lit up,” Fein recalled. “He had gained a lot of leg, his body had filled out and he looked absolutely gorgeous. He was a beautiful mover. We use Racing Edge Training Center and we kept getting comments from trainers and riders that they thought this horse was something special.”

The April-foaled gray was out Amazement (Bernardini), a daughter of dual Grade I winner Wonder Again (Silver Hawk) and a sister to Red Raven (Smart Strike), a stakes winner in Japan. He hailed from the family of Grass Wonder, a champion 2-year-old in Japan.

After breezing :20 4/5 at the sale, Colonel Liam caught the eye of several top bidders, including the Low's agent Jacob West.

“I was relying on Jacob's evaluation of him,” Low explained. “We noticed in his pedigree, he had a strong female family. Jacob, with his connection to the Taylor brothers, has a lot of appreciation for Unbridled's Song and that sire line.”

Colonel Liam sold to the Lows for $1.2 million and, while the Feins had had several pinhooks come close to the seven-figure mark over the years, the colt became their first million-dollar sale.

“I think that was probably one of the most exciting days of our lives when he sold for all that money,” Fein said. “We thought that he was going to get close to a million and then it kept going and going.”

“We were pretty close to the top of our budget,” Low admitted. “Usually those million-dollar purchases are just the kiss of death, but this one is working out so far.”

Colonel Liam was sent to Todd Pletcher and made his debut in April on the dirt. He was elevated to first via a disqualification, but Low said they were a bit disappointed with the effort after reviewing the numbers.

After a third-place finish in his next start, Pletcher decided to switch the sophomore over to the grass. The colt responded with a 2 3/4-length romp in an allowance at Saratoga.

“I don't think the numbers really described how impressive that particular race was,” Low said. “We had a big sigh of relief that this guy was going to be worth it after all.”

Stepping into stakes company next in the Saratoga Derby Invitational S., after getting bumped and pinched at the start, he finished behind eventual Grade I winners Domestic Spending (GB) (Kingman (GB}) and Gufo (Declaration of War), and was a nose short of third after stablemate No Word (Silent Name {Jpn}).

“He had a really tough trip,” Low said. “At the end he had a lot of run left in him with no where to go and no way to get through. He was less than a length from the winner even with all the trouble he had, so we thought we had the best horse in that race.”

Colonel Liam didn't disappoint in his final start leading up to the Pegasus with a 3 1/4-length win in the Tropical Park Derby.

Off as the 5-2 favorite in his first Grade I bid in the Pegasus, Colonel Liam maintained a ground-saving position in the middle of the field, but was shifted out wide by jockey Irad Ortiz Jr. going into the stretch and outdueled stablemate Largent (Into Mischief) to win by a neck.

“I thought he might have had too much to do as they came into the turn, but he figured out a way to get there,” said Low. “Irad did an excellent job and they got up. He galloped out nicely, went back to the barn and ate every oat.”

Low reported that while they're still enjoying reliving the win from this past weekend, the GI Old Forester Turf Classic S. on Kentucky Derby Day is an intermediate goal for the colt's 2021 campaign, although they may find another spot before then.

While the colt has only had six starts so far in his career, Low said the emotional roller coaster they've experienced already has made the horse unforgettable for both him and his wife.

“I think it's the anticipation that you have a nice horse,” he said. “Then you get some reality along the way with those first two dirt races. So you kind of have some ups and downs, but those downs are what make the good times so good.”

Low, owner of the Missouri-based trucking company Prime Inc., and his wife Lawana have been hooked on racing ever since their first Grade I winner in 1996 when Capote Belle (Capote) won the GI Test S. and then the GI Humana Distaff H. the following year.

Today, their racing stable has roughly 14 horses, of which half are in training with Pletcher and the others are split between Danny Peitz and Steve Margolis. They also are working to expand their breeding operation on their farm in Missouri.

Low said their all-time favorite horse they've owned is Magnum Moon (Malibu Moon), who won the GII Rebel S. and GI Arkansas Derby in 2018, but succumbed to a battle with laminitis following his bid in the GI Kentucky Derby that year.

“He was a dream horse,” Low recalled. “That guy was so smart and even through all his medical issues, he was a gentleman and courageous all the way.”

“We understand how precious and how courageous these horses are,” he said. “They go out there and put it all on the line. So I think it makes us appreciate having a good, healthy horse. It doesn't really change what happened with Magnum Moon emotionally, but it does give you an appreciation to live in the moment and take it all in.” 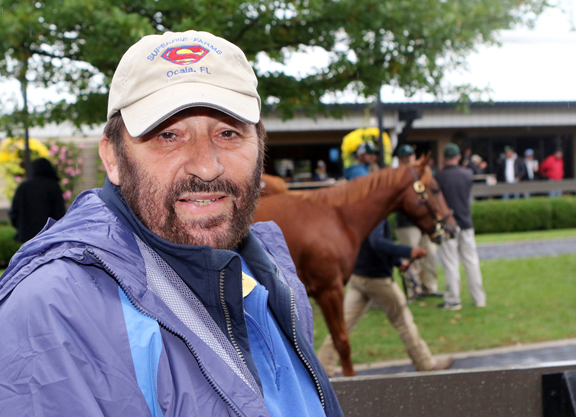 Ron Fein and his wife Suzanne recently celebrated the 25th anniversary of their Superfine Farms in Ocala. | Fasig-Tipton

The Lows may have several opportunities to make it to the winner's circle on big race days this year as they look forward to the return of two 4-year-old fillies. Dual graded stakes-winning turfer Sweet Melania (American Pharoah) and Grade II-placed Spice Is Nice (Curlin) are both expected to make their 4-year-old debuts by late spring.

When asked how he and his wife enjoyed the win on Pegasus Day, Low responded with a laugh, “We worked that bottle of champagne over real well, then we came back to Missouri in the early evening and have been quarantined since. But the quarantine is a small price to pay, so now we're just taking it all in and enjoying this horse.”

As for the couple who first put a saddle on the newly-crowned Grade I winner, the Feins celebrated the 25th anniversary of their farm days after Colonel Liam's victory. Fein said they have several promising pinhooks preparing for the upcoming 2-year-old sales, including a colt by Practical Joke and another by Arrogate.

“We believe in quality,” he said. “We try not to get overloaded with horses and we give most of them to Ciaran to finish off. He's the best that there is in the business. We have been very lucky together and it's been a great relationship. The man has a fabulous eye and it's nice doing business with honest people.”

When asked if he has any regrets over selling Colonel Liam or if he's happy to enjoy the memories of their dream-fulfilling sale, Fein responded, “Let's put it this way- you never stop riding the high of a million-dollar sale.”