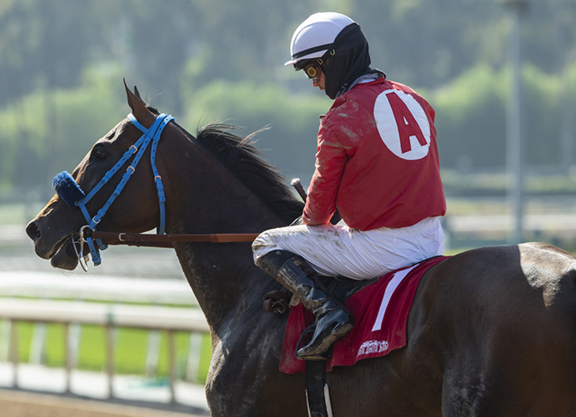 Collusion Illusion (Twirling Candy) is unbeaten going one-turn and will try to continue that run in Sunday's GII Santa Anita Sprint Championship S., a “Win and You're In” event for the GI Breeders' Cup Sprint S. Kicking off this term with a track-and-trip optional claimer score May 17, the sophomore triumphed in the GIII Lazaro Barrera S. June 20 and took the GI Bing Crosby S. by a nose last time at Del Mar Aug. 1.

C Z Rocket (City Zip) looks to secure his fifth straight win Sunday. Capturing a $50,000 claiming event at Churchill May 25, he won an optional claimer there June 21 and another at Keeneland July 12. The gelding bested by Flagstaff (Speightstown) by a half-length last time in the GII Pat O'Brien S. Aug. 29.

Winner of the GII San Carlos S. in March, Flagstaff was a close second in the GIII Count Fleet Sprint H. Apr. 18. The gelding was fourth to fellow Summer Wind-bred and MGISW McKinzie (Street Sense) in the GII Triple Bend S. June 7 prior to the Pat O'Brien.