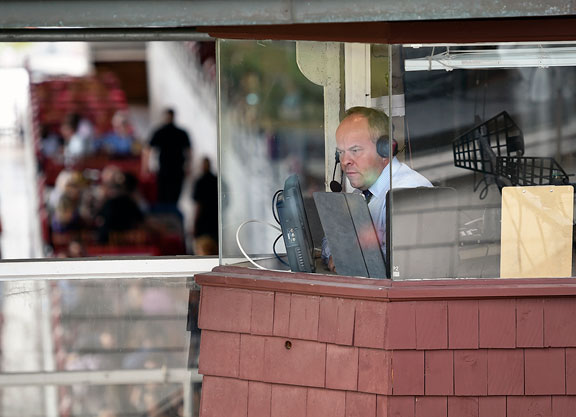 “I'm excited about calling the races at Kentucky Downs and looking forward to getting back in action,” said Collmus, who was the New York Racing Association announcer from 2015 through last fall after spending a year calling the races at Churchill Downs. “The purses at Kentucky Downs are second to none and the unique layout is a fun challenge. I'm thrilled to share the mic with Michael. We've known each other for decades, and we certainly have a lot in common.”

Ted Nicholson, Kentucky Downs' senior vice president and general manager, said that Collmus and Wrona will split the races for the track's opening Labor Day card Sept. 7, with Wrona announcing on Sept. 9 and 10 and Collmus closing out the meet Sept. 12, 13 and 16.

Wrona joined Kentucky Downs's live meet team last year before becoming the full-time announcer at Los Alamitos Race Course upon the retirement of longtime race-caller Ed Burgart. Collmus will be in Kentucky to call the Kentucky Derby, which was postponed until Sept. 5. He was Churchill Downs's announcer in 2014 before replacing the iconic Tom Durkin in New York.

“This is a great coup for Kentucky Downs to get two of the best announcers in the world to call our six days of racing,” said Nicholson, who met Collmus when both worked at Boston's Suffolk Downs. “For Larry to be even available is incredible, but I'm thrilled he was. I've known Larry for 30 years. It's great to get him alongside Michael. To have both of them on opening day–our first on Labor Day–is just amazing. They are two of the best announcers anywhere. We'll have fun with this.”