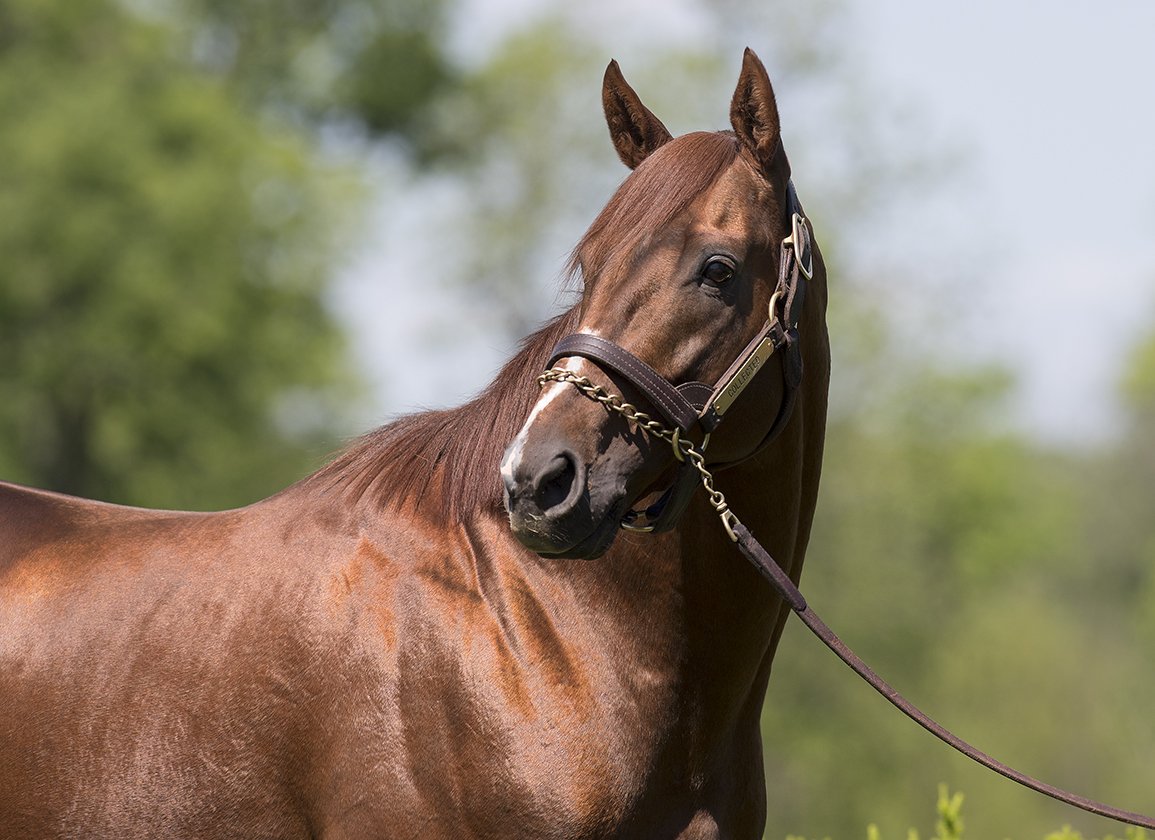 Collected's first crop of yearlings showing a strong resemblance to their sire as well as their grandsire, City Zip. | Sarah Andrew

Carrie Brogden wasn't planning on purchasing many pinhook prospects for Machmer Hall at last year's Keeneland November Sale. She was busy inspecting the stock on her clients' shopping lists, plus her farm already had a plethora of weanlings back home that would need to be prepped come summertime.

But on the fourth day of the sale, a colt entered the ring that she couldn't pass up. The February-foaled weanling came from the James B. Keogh consignment and was a son of first-crop weanling sire Collected (City Zip-Helena Bay (GB), by Johannesburg). The youngster was out of the winning Arch mare Androeah, a full sister to GISW Archarcharch.

“I just fell in love with this guy,” Brogden said. “We bought him off David Anderson, who is well known for raising top horses. He was a big, strong, strapping, uncomplicated type with lots of bone and was correct.”

Brogden purchased the colt for $65,000 and is now preparing the chestnut for his return to the sales ring at the Fasig-Tipton July Sale, where he will sell as Hip 340.

Machmer Hall will be represented by a second Collected yearling at the same auction. Hip 279, a homebred for the farm, is the first foal out of Shawklit Cake (Majesticperfection).

“We've had really good luck with this whole female family,” Brogden explained. “It's a big, raw, lengthy family so I was thinking that if City Zip were still alive, he would be the perfect type of stallion to breed to this mare.”

“We're shareholders in Collected and have been big fans of the stallion and of Marette Farrell, who purchased him as a 2-year-old. I feel like we got what we were looking for [in the yearling] with the size and stretch from the female family but with a big hip. There are a lot of qualities of City Zip that I see in her, which I love.”

Machmer Hall has been a strong supporter of Collected since he joined Airdrie Stud in 2019. Based on the progeny Brogden has seen in Collected's first two crops, she has noticed a strong resemblance to the late perennial leading sire City Zip.

“I did think he was going to throw back to City Zip, so I'm very pleased with what we've seen,” she noted. “I love the fact that they're colored like City Zip. I love to see, like with Into Mischief, when they stamp them in their colors. With these guys, the City Zip shines through and I think Collected might be able to walk in his sire's footsteps based on what I'm seeing. They're athletic and uncomplicated with great minds and they're easy keepers. They're what you'd like to see as they're progressing towards the racetrack.”

Airdrie Stud's Bret Jones agreed that Collected's first few crops seem to reflect the best in both the young stallion and his sire. 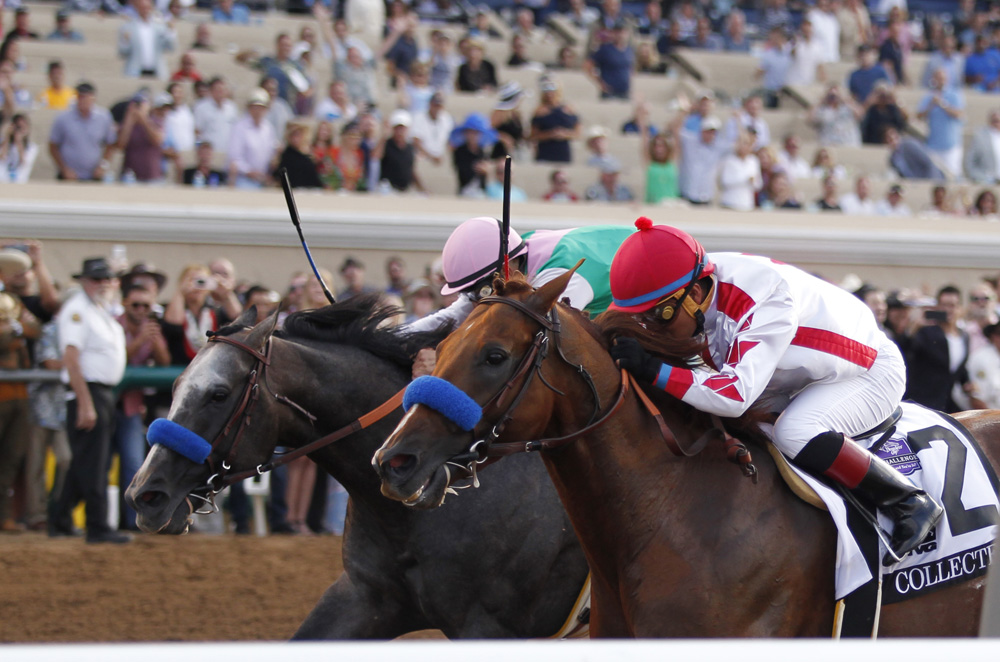 “These foals are very much in Collected's image,” Jones said. “They've got that City Zip kind of look, but with a little more leg, a little more size, and I'd have to say they're a little more correct.”

While Collected's progeny have been likened to their grandsire, Jones said that the stallion himself has often been compared to the internationally influential sire Blushing Groom, a prominent member of Collected's female family.

“Collected's pedigree is fabulous and so many people who have come out to see him have said that he really is the spitting image of Blushing Groom,” he said. “The similarities are striking. You think of what an important stallion Blushing Groom has been and this horse has the same beautiful look with that medium size that fits the different kinds of mares that come his way. He's that wonderfully good-balanced type with the big walk that everybody loves. He really moves like an athlete ”

Bred by Runnymede Farm and Peter J. Callahan, the son of the winning Johannesburg mare Helena Bay (GB) was a $170,000 OBS March purchase by Marette Farrell for Speedway Stables in 2015.

While Airdrie had their eye on Collected ever since he was a promising debut-winning juvenile, it wasn't easy for them to get him to their stud barn.

“Collected is very special to us because it really was a long process to bring him here to Airdrie,” Jones explained. “He had shown a lot of talent as a 2-year-old and was really coming into his own as a 3-year-old. That's when we first reached out to Peter Fluor and K.C. Weiner at Speedway, who along the way have become very good friends.”

At three, Collected took the GIII Sham S. and GIII Lexington S., winning three of his five starts that year.

At four, he blossomed. After easy wins in the Santana Mile S. and GII Californian S., he made headlines with a 14-length blowout victory in the GIII Precisionist S. followed by his signature win in the 2017 GI Pacific Classic S. over champions Arrogate and Accelerate. He ran second in the GI Breeders' Cup Classic after dueling eventual Horse of the Year Gun Runner and then retired the following year with earnings of nearly $3 million.

“He was absolutely one of the best horses in training that 4-year-old year when he won the Pacific Classic and was second in the Breeders' Cup Classic,” Jones said. “Thankfully at the end of the day, we were given the opportunity to stand the horse and it's been everything we could have asked for.”

One of the commitments Airdrie made when taking Collected on, according to Jones, was to support the young stallion with the best their farm had to offer.

“That meant breeding our Kentucky Oaks winner [Believe You Can (Proud Citizen)] as well as multiple Grade I producers. It meant never slowing down on the support that we would give him. In his third year, we've bred another 20 mares to him and we'll do the same thing next year. We really believe in the horse and so we want to give him that opportunity.”

Jones said that Collected has received strong support from off the farm as well. He bred 156 mares in his first year at stud and an additional 155 last year.

“We've been unbelievably lucky with Collected. He has been very well received really from the start. He was booked full each of his first two years and we've got a wonderful syndicate behind the horse that made sure he has gotten not only the quantity, but the quality of mares. In his first year, the Comparable Index was a 2.25, which is the highest than I can ever remember us having for a first-year stallion and much higher than what the stud fee would generally reflect.”

Collected's fee has held steady at $17,500 in his first three years and Jones said that the stallion will end up seeing over 100 mares in his third book as well.

“Because of this horse's popularity and because of the syndicate behind him, he's really been able to get that support. There will be no small crops. No one has backed down. David Anderson is breeding 12 mares to the horse and Fred Hertrich III is breeding six. The Brogdens are great partners and Speedway Stable is sending some of their top fillies from off the track, so there's no shortage of support and it's really going to be up to him.”

At the upcoming Fasig-Tipton July Sale on July 13, Collected will be represented by 13 yearlings with notable pedigrees including Hip 19, a filly out a Bernardini half-sister to GISW and two-time GI Breeders' Cup Filly and Mare Turf runner-up Film Maker (Dynaformer), as well as Hip 78, a filly out of a daughter of GI Breeders' Cup Juvenile Fillies winner and Eclipse Champion She Be Wild (Offlee Wild). View Collected's full Fasig-Tipton roster here.

“When you first get the stallion, you're excited about their chances,” Jones explained. “Then the next thing is what sort of individuals are they getting. I couldn't be more excited to show off exactly what kind of foals this horse is getting in the July Sale and the fall sales as well.”

From there, Jones said he believes Collected's progeny will excel on all aspects once they hit the track.

“Collected, like City Zip, has the chance to throw a lot of different types. City Zip could certainly get your early horses and your sprinters, but he could also get you a horse like Collected or Improbable that can stretch out and win a Grade I at a mile and a quarter. There's no reason why Collected can't have a similar type of success. I think they'll be diverse on the track and that he's got an opportunity to have a lot of success with a lot of different types.”