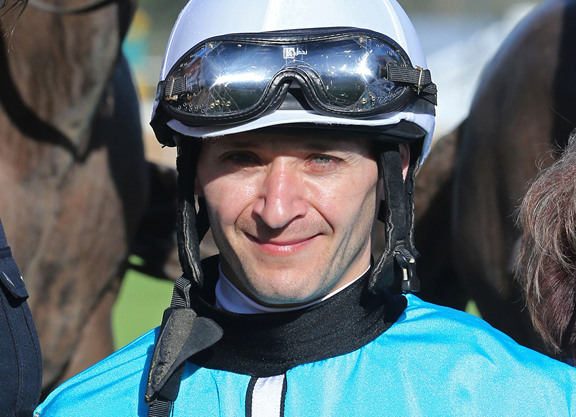 Allegations of intentionally whipping a rival jockey during a race have resulted in a 60-day suspension for David Cohen, who entered Friday's racing second in both wins and earnings at Oaklawn Park.

According to the Oaklawn stewards, Cohen's close-quarters whipping in the stretch run of the eighth race on Apr. 6 allegedly caused four welts on the right thigh of jockey Edgar Morales.

Cohen, at a stewards' hearing, testified that he “would not deliberately hit another jockey with his riding crop/whip and that if it happened it was accidental,” according to Arkansas Racing Commission ruling 2019-OP-42.

But the stewards ruled otherwise, citing “credible evidence” that Cohen's whipping was intentional based on testimony from two jockeys and a valet who witnessed Morales confronting Cohen in the jockeys' room about it after the race.

Cohen was riding Bolita Boyz, part of a 4-5 favored coupling. Morales was inside of Cohen's mount for most of the six-furlong starter-allowance aboard 10-1 No Funny Biz. The geldings finished fourth and fifth, respectively.

According to the ruling, “In reviewing the video of the race, Mr. Cohen explained they were in very tight quarters and he was hitting left handed with very short tight strokes.”

Some of them allegedly made contact with Morales. After the race, according to the testimony, Morales approached Cohen and said “You whipped me more than you did your horse.”

Cohen allegedly replied, “Be patient and don't take me wide.”

Morales pressed Cohen for a better answer. According to the ruling, Cohen allegedly replied “that he hit Mr. Morales a few times because he had taken Mr. Cohen out near the top of the stretch.”

This exchange was overheard by the other riders and a valet (all unnamed in the ruling), who testified that “they considered Mr. Cohen's admission as indicative of a deliberate action by Mr. Cohen, that it wasn't an accident as sometimes can happen in close quarters during a race.”

The stewards underlined the word “deliberately” in citing Cohen's violation when writing up the 60-day rule-off that runs Apr. 27-June 25.

A Friday afternoon voicemail left with Cohen's agent, William Castle, inquiring whether or not the suspension would be appealed did not yield a return phone call in time for deadline for this story.