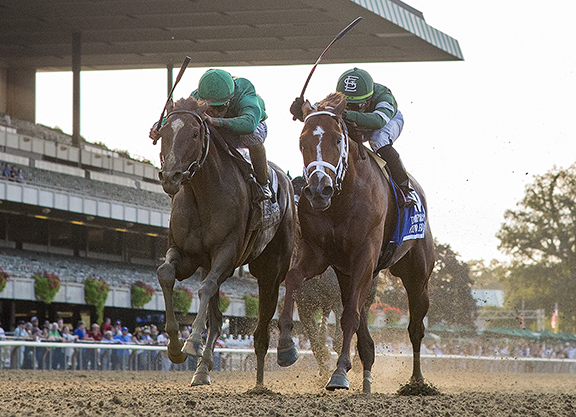 Code of Honor (Noble Mission {GB}) will not be back to defend his title in the GI Jockey Club Gold Cup and will instead make his next start going a mile in the GII Kelso H. at Belmont Oct. 3.

“I said all along after the Whitney that I was going to start all over again,” trainer Shug McGaughey said. “I thought the Kelso was a good spot to start over again, running him at a mile instead of a mile-and-a-quarter in the Gold Cup after he’s been away for 2 1/2 months. We’ll run him at the mile, see what happens and take it from there.”

Code of Honor was placed first in the 2019 Gold Cup after Vino Rosso (Curlin) was disqualified for interference.

Code of Honor got off to a fast start this year, winning the GIII Westchester S. June 6 at Belmont. He subsequently finished third in the GI Runhappy Metropolitan H. and, in his most recent start, fourth in the GI Whitney S.

“With him, it got all messed up because of COVID and no racing for a while,” McGaughey said. “Those races got bunched up. I probably made a mistake running him in the Metropolitan Mile. If not for COVID, I could have run him opening day at Belmont, in the Met Mile on Belmont Day and then in the Whitney in the first part of August. The spacing would have been a lot better. That wasn’t to be.”

“He worked good this morning,” McGaughey said. “Javier (Castellano) worked him and he came back and said that he worked really good and that there was a lot left in the tank. I’ll sharpen him up next Monday and we’ll take it from there.”