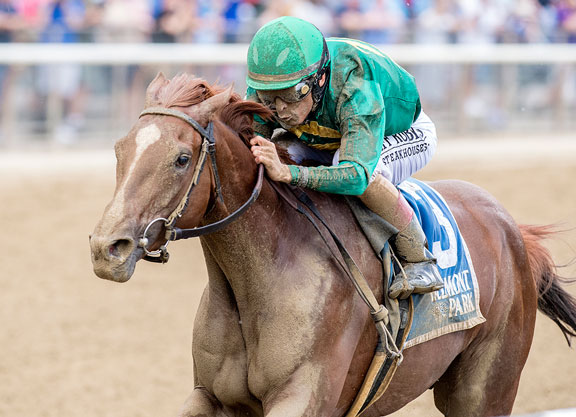 Second to Complexity at 14-1 in the GI Champagne S. here two falls ago, Code of Honor captured the GII Xpressbet Fountain of Youth S. two starts later and was runner-up via disqualification in the GI Kentucky Derby two starts after that. Dominating the GIII Dwyer S. over track and trip, he scored victories in the GI Runhappy Travers S. and GI Jockey Club Gold Cup before fizzling out when seventh in the GI Longines Breeders' Cup Classic. Annexing the GIII Westchester S. in his seasonal debut here June 6, the chestnut was third in the GI Runhappy Metropolitan H. before running an even fourth in the GI Whitney S. last out Aug. 1 at Saratoga.

Complexity picked up his 'Rising Star' badge with a 4 1/4-length debut victory on closing day at Saratoga in 2018, but following his wire-to-wire Champagne tally, beat just three horses combined in the GI Sentient Jet Breeders' Cup Juvenile and GI Woody Stephens S. Laid up for over five months, the $375,000 Keeneland September grad rediscovered his top form with a dominant optional claimer win at Aqueduct, but backed up to fourth when shipped cross-country for the GI Malibu S. Adding another optional claiming success in his track-and-trip return July 2, the bay produced clearly his best stakes effort since the Champagne when finishing a hard-fought, half-length second in the GI Forego S. Aug. 29 at Saratoga.

Endorsed (Medaglia d'Oro) battled Code of Honor to within a half-length as a runner-up in the Westchester, but made no impact when seventh in the Met Mile and finished second at 3-5 in the Alydar S. last out Aug. 9 at the Spa.