Code of Honor in Fine Condition, Likely on to Florida Derby 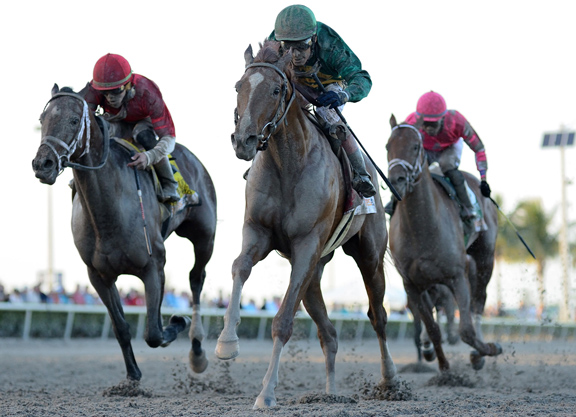 “So far, all systems are go,” said McGaughey less than 16 hours after watching the 3-year-old colt win Saturday and bounce back from a disappointing performance in the Jan. 5 Mucho Macho Man S. “He seems to have come back fine. We shipped him back last night to Payson [Park Training Center] and he seems fine this morning.”

Second in the GI Champagne S. at Belmont Park last fall, Code of Honor redeemed himself for a defeat as the heavy favorite in the Mucho Macho Man with a rallying win in the Fountain of Youth.

“Obviously, I thought about [the Mucho Macho Man] a lot,” he said. “I thought from what I saw he probably needed the race and probably, maybe, needed to change his running style just a little bit. We needed to get into him and train him a little harder and more frequent and see if he would take it.”

McGaughey said his preference is to remain at Gulfstream and run next in the GI Xpressbet.com Florida Derby March 30.

“He came out of it well,” Hennig said. “There were a few things that might have made a difference. Coming off the turn he had to swing just a little wide. But that's horse racing.”

Hennig said his immediate thought is to run next in the Florida Derby. “We have to see how the horse is doing,” he added. “He's also won at Aqueduct.”

One race before the Fountain of Youth, Cash is King and D.J. Stable's MGISW champion Jaywalk (Cross Traffic) was a head-scratching fourth behind Jeltrin (Tapizar) in her sophomore debut as the heavy favorite in the GII Davona Dale S. Trainer John Servis reported the filly exited the effort in fine condition Sunday morning.

“She's doing super, very good,” Servis said. “She was bright-eyed this morning, looked great. She just needed the race, that's all. It's a stepping stone, and that's what we were using it as. I thought she could win anyway and she didn't, but that's all right. She came out of it good and we're going to move forward. She'll be ready in May, I can tell you that.”

Servis said Jaywalk remains on course for her first major goal of 2019, the May 3 GI Kentucky Oaks, and expects to have one more prep race, either in the GII Gulfstream Park Oaks March 30 or the GI Ashland S. Apr. 6 at Keeneland.