'Clock' Turned Back in Bay Shore 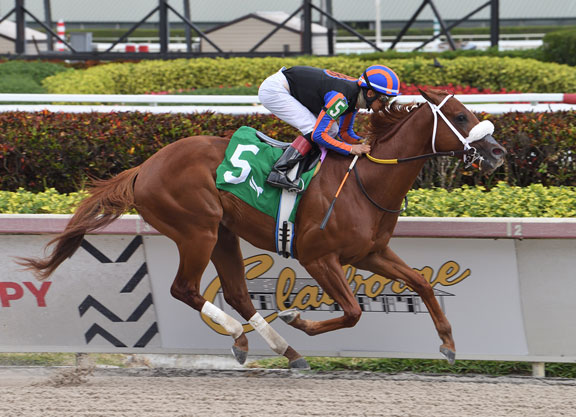 Despite a solid runner-up finish last out in the GII Fasig-Tipton Fountain of Youth S., Drain the Clock (Maclean's Music)'s future appears to be around one turn, and he figures to be an overwhelming favorite in Saturday's seven-furlong GIII Bay Shore S. at Aqueduct.

Romping to a six-length debut graduation as an 8-5 favorite in a Gulfstream off-the-turfer Sept. 12, the Saffie Joseph trainee repeated in a Gulfstream West allowance/optional claimer Oct. 28 before losing his rider when making his stakes bow in the Jean Lafitte S. Nov. 30 at Delta. Redeeming himself with a comprehensive win in the Limehouse S. back at Gulfstream Jan. 2, the chestnut romped again in the GIII Swale S. there Jan. 30 before setting the pace and besting all but top GI Kentucky Derby contender Greatest Honour (Tapit) in the Fountain of Youth.

“He's never gotten beat going one turn. He ran a credible race in the Fountain of Youth but I think he's best at one turn and we're hoping he'll show up and run his usual race,” Joseph told the NYRA notes team.

Opposing Drain the Clock in this five-horse field are Too Boss (El Padrino), a 5 1/2-length local maiden breaker Jan. 17 for Todd Pletcher, Garoppolo (Outwork), a second-out winner last July who hasn't been seen since running fourth in the GII Saratoga Special S., Whiskey Double (Into Mischief), a late-running allowance victor last out Feb. 28 at Oaklawn, and Beren (Weigelia), who triumphed in his last two outings at Parx for Butch Reid.