'Cliff' to Have Slight Edge on Guineas Rivals 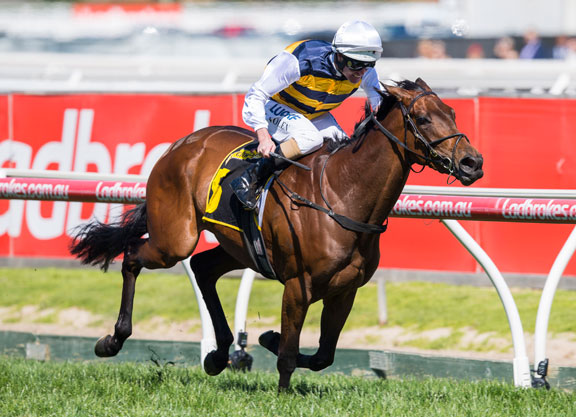 With two runners in the capacity 16 horse field, trainer Darren Weir will saddle up the favourite, Cliff's Edge (Aus) (Canford Cliffs {Ire}) who looks the leading contender in Saturday's G1 Australian Guineas (1600m) at Flemington, especially now that he is back to level weights.

Resuming this time in with a narrow victory in the G3 Manfred S. (1200m) on Feb. 3 at Caulfield, the 3-year-old colt was beaten last start by fellow Guineas runner Grunt (NZ) (O'Reilly {NZ}) on Feb. 17 in the G3 CS Hayes S. (1400m), but now up to the 1600m, he should really come into his own, although jockey John Allen will need a game plan, having drawn the second from the outside. With his usual racing patter to sit handy, Allen has won at his past two rides on the colt, and hopefully his class, and ability to run out 2000m will see him take the prize.

Set to start in the gate to the immediate outside of Cliff's Edge is Mick Price's Grunt (NZ), a winner two starts back over 1600m before his victory over the Darren Weir-trained colt in the CS Hayes. Also one to appreciate racing in a forward position, we may see the two favoured runners charge from the gates to try and head forward, but this could prove their undoing, with Grunt likely to get planted the widest of all.

Beaten as the red-hot favourite in the G1 Victoria Oaks during the spring, Aaron Purcell's Aloisia (NZ) (Azamour {Ire}) resumed with a solid fifth behind Rimraam (NZ) (Commands {Aus}) in the G3 Vanity S. on Feb. 17, and as one of only two fillies in the A$1-million contest, the Mark Zahra-ridden stakes winner should be charging home–remember she did capture the G1 One Thousand Guineas (1600m) second-up last campaign after having finished fifth first-up.

G1 Caulfield Guineas winner Mighty Boss (Aus) (Not A Single Doubt {Aus}) comes into the race off the back of two slightly indifferent starts, both over 1400m against the older horses, and if he handles the back-up after his Futurity performance a week prior, the Mick Price-trained colt has the class to come along the inside and take victory.

Last Spring's G2 Sandown Guineas one-two Villermont (Aus) (All Too Hard {Aus}) and Peaceful State (Aus) (Animal Kingdom {USA}) both head into Saturday's race off different recent form lines, but the pair appear to have undeniable chances based on their last start over the 1600m at Sandown.

New Zealand colt Embellish (NZ) (Savabeel {Aus}) has been up for quite some time, capturing the G1 NZ 2000 Guineas on Nov. 11, four starts back, and he produced a solid effort in the CS Hayes when finishing sixth. Set to appreciate stepping back up to the 1600m, he has form around some handy runners and looks a likely show.