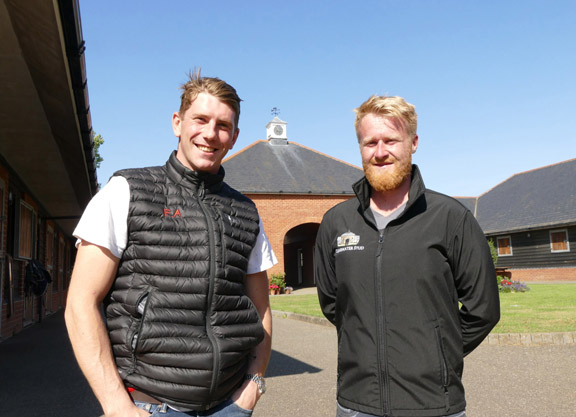 Clearwater Stud makes its debut on the list of consignors at Tattersalls this week, but it is a newcomer in name only.

Formerly known as The Kathryn Stud, the Buckinghamshire farm owned by Fergus Anstock previously consigned yearlings through Bumble Mitchell. Following the return home of Anstock's son Farran after something of a world tour of experience-gathering on various studs, the family took the decision to consign under their own banner.

The name Clearwater was inspired by the stud's proximity to an old water mill. It is also handily close to the M1 motorway, not that you'd know it once standing amid the peaceful, immaculate yard built on the former cattle farm which has been home to the Anstocks since 2005.

“Dad bought the first couple of mares in 2006, just two or three to begin with, and we have 15 on the farm now. Twelve of them are in foal, plus there is another filly in America,” says Farran Anstock.

Along with Niall Horgan, the 29-year-old has prepped six yearlings for sale this year, starting with three at the Goffs UK Premier Sale in August. The second trio is set to sell in Newmarket and includes a first Book 1 offering. The catalogue contains two Kingman yearlings out of different mares both named Parle Moi as consecutive lots on Thursday, though the second is now withdrawn. Clearwater Stud's Kingman colt is lot 488, out of the 9-year-old Montjeu (Ire) mare Parle Moi (Ire), a winner as a juvenile in France and already the dam of a 2-year-old winner by Kendargent (Fr). The colt's grandam Di Moi Oui (GB) (Warning {GB}) was twice a Group 3 winner and has three black-type performers among her nine winners.

“The Kingman is very exciting. We just have to hope he shows himself off well, but we couldn't be happier with how he has been through his prep,” says Anstock of the operation's prize colt.

In Book 3, Clearwater Stud will offer two more colts, by New Approach (Ire) (lot 1730) and Starspangledbanner (Aus) (lot 1406). The latter is out of the Cheveley Park Stud-bred Adore (GB) (Oasis Dream {GB}), from the family of Group 1-winning juvenile Hooray (GB) (Invincible Spirit {Ire}) and, like Parle Moi, purchased for the Anstocks by their bloodstock advisor Jeremy Brummitt. The agent also bought the New Approach colt's dam Arwaah (Ire) (Dalakhani {Ire}), a former Shadwell mare, while she was carrying him.

For someone who had no contact with horses while growing up, Anstock has devoted most of his twenties to ensuring that he gathered as much experience as possible before embarking on his own consigning business.

He says, “For a while I didn't really know what I wanted to do. I don't think I'd ever touched a horse, I'd never ridden anyway and hadn't been up close to one, so when I did I was terrified.

“I came here to work for a bit and Alice Mills, who was here at the time, eased me into the horses. I did a bit of painting around the farm and maintenance jobs and then I started bringing in the odd mare or two. Dad was trying to work out whether I was serious or not so he sent me over to work for Eddie O'Leary at Lynn Lodge Stud. I absolutely loved it there I got on really well with Eddie and all his staff and they taught me a hell of a lot. I loved it so much that I decided I wanted to prep yearlings.”

From Lynn Lodge, Anstock enrolled in the National Stud course and then went on to Coolmore Australia for six months for the foaling season followed by yearling prep, before returning ever closer to home to work at Coolmore's HQ in Ireland and then to complete a four-year stint at the National Stud in Newmarket.

“I loved working at Coolmore but I came away thinking that we might as well give up because we could never compete, but we all need a little luck. Dad and Jeremy got into Dubawi when he was standing at £75,000 and they sold the yearling filly out of Polly's Mark (Ire) for 700,000gns. She's actually now back out in the paddock as we bought her back from Godolphin as a 3-year-old for 30,000gns.”

Named Pure Shores (GB), the Dubawi filly won three times in Fergus Anstock's colours after returning to the fold and being sent to Ian Williams. “She is now in foal to Camelot (GB) and we are a bit excited about her,” adds Farran Anstock.

One of four brothers and the only one with a penchant for Thoroughbreds, Anstock is clearly enjoying his role back in the family business, which also extends to the odd pinhook or two. He says, “It's quiet around here. Dad's out every day doing a bit of work on the farm. We're quite a close-knit family. We also have Niall Horgan, who was at Cheveley Park Stud, Plantation Stud and did six or seven years at Coolmore, so he's extremely capable. Jeremy comes here every month or so to see the stock, and drops in on the horses in training and has played his usual part in all the covers this year.”

He continues, “Bumble Mitchell previously prepped all our yearlings and she has been so helpful to us over the years. I didn't know how she would feel about me coming back to the farm and doing the yearlings but she has been fantastic and she said, 'I'm on the phone whenever you need me'. At Doncaster she was the first person to come down and ask to see the horses and she was really supportive. I really am very grateful for that.”