Classic Hopefuls Turn It Up a Notch 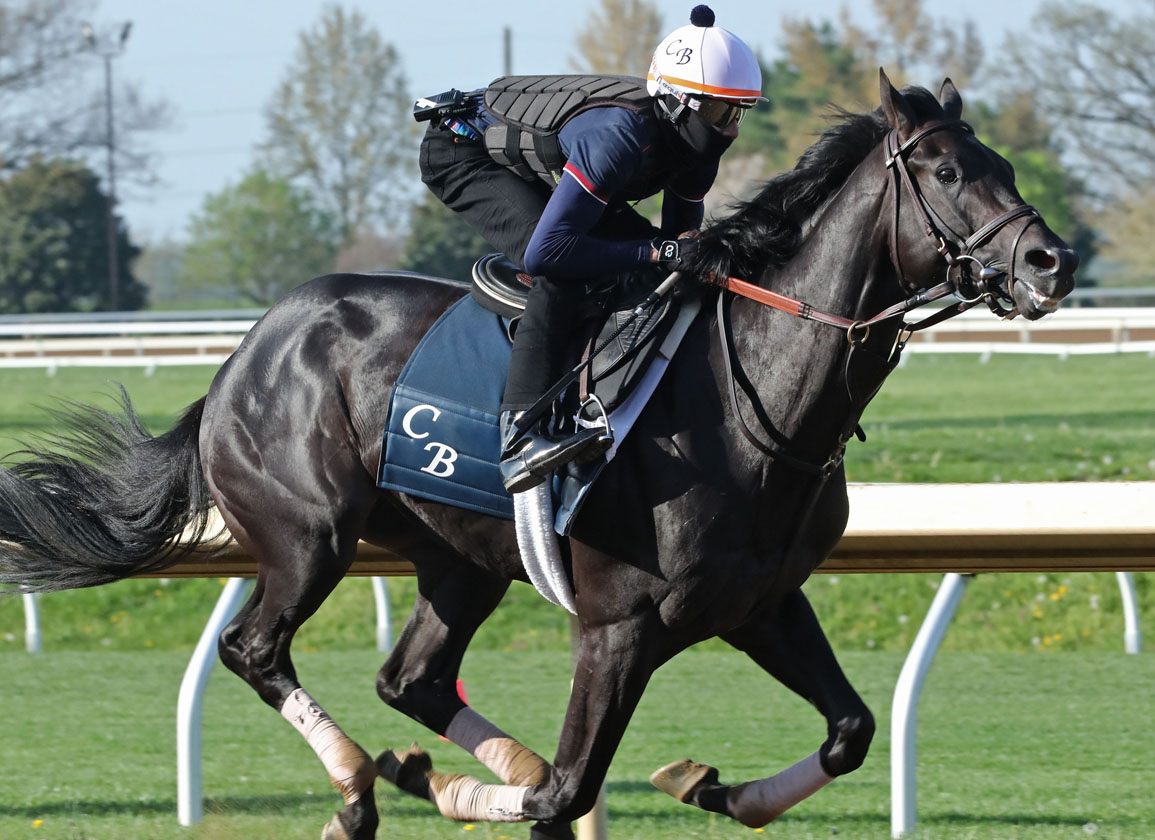 With two weeks remaining until the first weekend of May, several chief protagonists for the GI Kentucky Derby and GI Longines Kentucky Oaks turned in some key breezes in Kentucky and California.

Jeff Drown's Zandon (Upstart), who cemented his spot in the Derby field with an eye-catching victory in the GI Toyota Blue Grass S. at Keeneland Apr. 9, has remained in Lexington to train up to the big race and went a half-mile in :48.60 (see below). The $170,000 Keeneland September graduate covered his opening furlong in :12.80, then gradually picked up speed through subsequent splits of :25.20 and :37 flat, with trainer Chad Brown and big-race rider Flavien Prat observing from the grandstand. Zandon galloped out five furlongs in 1:00.80, three-quarters of a mile in 1:13.80 and was up seven panels in 1:27.80.

“He was moving super; just what we wanted to see,” Brown said. “We just wanted to maintain where he is. He does not have to get any fitter. I was impressed with how he galloped out.”

Zandon is scheduled to ship to Churchill Sunday morning and will have his final Derby drill next Saturday.

Among those working beneath the Twin Spires Saturday was Blue Grass runner-up and 'TDN Rising Star' Smile Happy (Runhappy), who worked five furlongs in the company of his GIII Jeff Ruby Steaks-winning stable companion Tiz the Bomb (Hit It a Bomb). Smile Happy, whose docket includes a second-out victory in Churchill's GII Kentucky Jockey Club S., began the work about one length ahead of Brian Hernandez, Jr. and Tiz the Bomb (1:00.20), who moved to the outside of Smile Happy (1:00.40) and finished on even terms.

“We were just looking for an easy move today and we got that,” trainer Kenny McPeek said. “We'll probably do the same thing again next week.”

A day after stablemate and 'TDN Rising Star' Zozos (Munnings) sizzled six furlongs in 1:12.40, Gold Square's GI Arkansas Derby hero Cyberknife (Gun Runner) followed suit Saturday morning. Working at 5:15 a.m. with Florent Geroux at the controls, the Gold Square colorbearer went the same distance a tick quicker, then galloped out an extra furlong in :12.40, according to noted Churchill clocker John Nichols. Geroux also breezed Zozos on Friday, but retains the call on Cyberknife for the Derby.

“It's amazing being here at Churchill Downs,” said Courville's son Clay. “I've been here before but nothing like this. [Un Ojo] is getting over the track really well.”

At Santa Anita Saturday morning, 'TDN Rising Star' Messier (Empire Maker) went five furlongs in :59.80 for trainer Tim Yakteen, galloping out six furlongs in 1:12 and change, per a tweet from the ownership group's Tom Ryan. The Ontario-bred works again next Friday before shipping to Kentucky.

Expected to work Sunday are the Steve Asmussen duo of GII Louisiana Derby winner Epicenter (Not This Time) and Echo Zulu (Gun Runner), each among the favorites for the Derby and Oaks, respectively.

MESSIER 🇨🇦 cruised 59.8 with @DraydenV in hand this morning, galloped out 6f in 1:12, and change. @timyakteen was delighted with the move. He's come out of the @santaanitapark Derby in great shape; the plan is to work next Friday again before he ships to @ChurchillDowns #Messier pic.twitter.com/TlziVd5vWQ

Winngate Stables' Kathleen O. (Upstart), undefeated winner of the GII Gulfstream Park Oaks and also among the top fancies for the GI Longines Kentucky Oaks, prepped for that engagement Saturday at Keeneland, breezing a measured half-mile in :48.80  (see below) for her Hall of Fame conditioner Shug McGaughey.

“She picked it up and galloped out strong,” said assistant trainer Anthony Hamilton. “We are in good shape. She's a happy horse–that's what you look for.”

Kathleen O. ships across to Churchill Monday or Tuesday, according to Hamilton.

“This was her last work here,” said Bejarano, who rode Candy Raid for the first time in the victory at Turfway. “She's feeling good. I got her out five-eighths in 1:02 and change.”

Candy Raid is scheduled to ship to Churchill on Thursday and have her final pre-Oaks work there.

WATCH: Kathleen O. breezes towards the Oaks at Keeneland