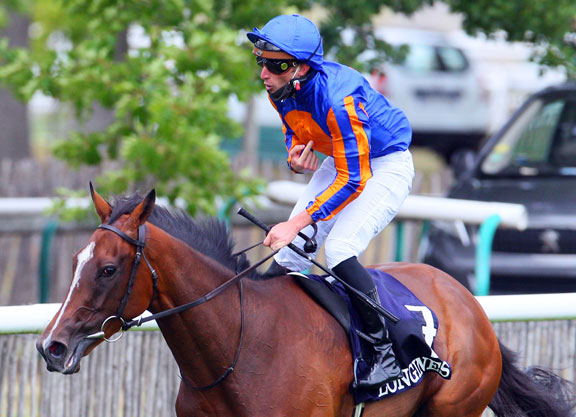 Classic heroine Fancy Blue (Ire) (Deep Impact {Jpn}-Chenchikova {Ire}, by Sadler's Wells) has been retired, according to a tweet from Paul Smith, son of co-owner Derrick Smith. Bred by Coolmore, the bay raced for a Coolmore partnership.

“Fancy Blue retires,” Derrick's son Paul Smith tweeted of the 3-year-old who sustained a tendon injury in training. “Thank you to Donnacha O'Brien and all connected with her.”

A winner of a Naas maiden last September and of the Listed Staffordstown Stud S. a month later for Aidan O'Brien at two, Fancy Blue was moved to the newly opened yard of O'Brien's son Donnacha, where she ran second in the June 13 G1 Tattersalls Irish 1000 Guineas first out at three. She then earned her first Group 1 crown with a score in Chantilly's July 5 G1 Prix de Diane, the first Group 1/Classic for her young trainer and doubled up with another victory in the G1 Qatar Nassau S. on July 30. Her final run was a third in the G1 Coolmore America “Justify” Matron S. at Leopardstown on Sept. 12. She was due to compete in the G1 Prix de l'Opera before she was withdrawn due to contaminated feed. Her record stands at 6-4-1-1 and $693,376 in earnings.