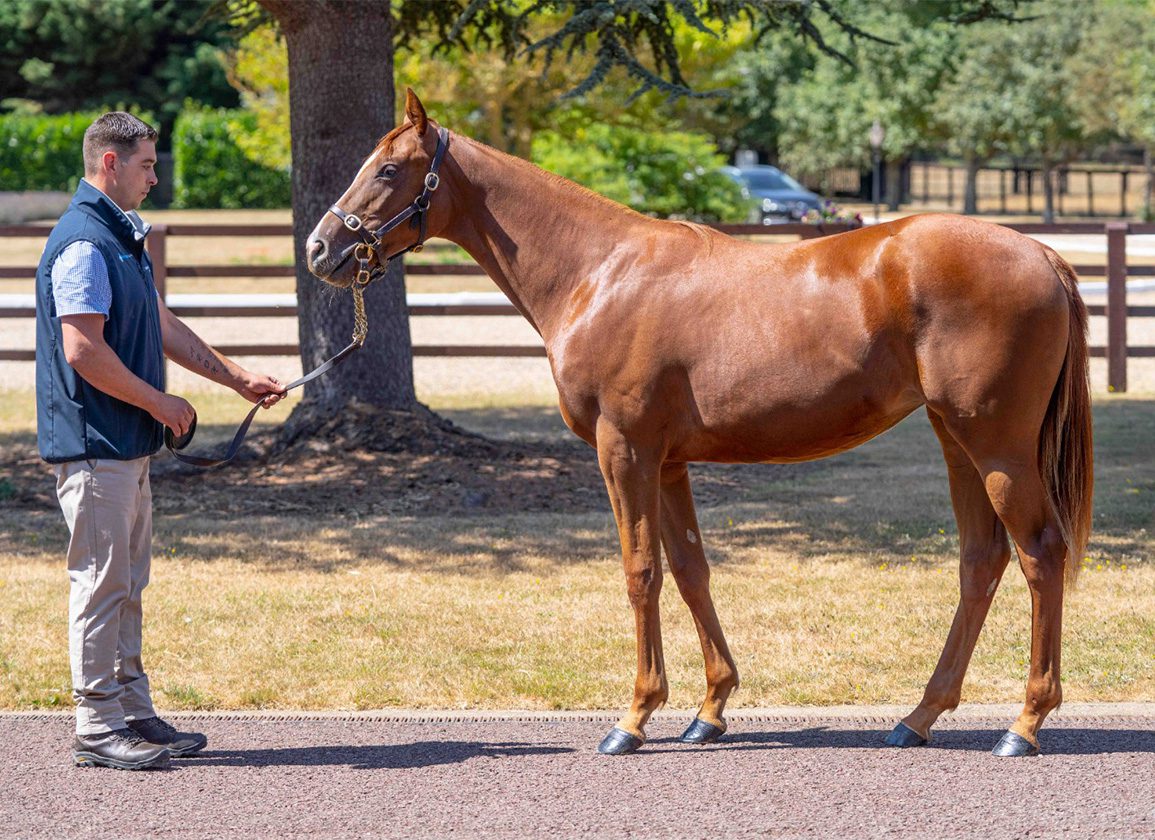 Blue Diamond Stud is by no means a new name in the industry, and it has been in the news plenty this season courtesy of the dual Group 1 winner Nashwa (GB) (Frankel {GB}), but where it has not been seen before is on the list of yearling consignors.

That changes this week with the stud's debut selling yearlings under its own banner at the Arqana August Sale. And as debuts go, it is a pretty dazzling one as the stud's owner Imad Al Sagar will be offering a sibling to his Classic heroine Nashwa. Indeed, Al Sagar can also be credited with having bred the filly's Group 1-winning sire Decorated Knight (GB) in partnership with Saleh Al Homaizi. The fact that the stallion who now stands at the Irish National Stud is by Galileo (Ire) makes the filly a three-parts-sister to Nashwa, and she will be first of the select draft to go under the hammer in Deauville as lot 93 on Saturday evening.

It has been a year of significant changes at Blue Diamond Stud, which is comprised of two farms to the north and south of Newmarket. Ted Voute, a familiar figure on the sales circuit as a leading consignor for many years, and also a long-term advisor to a select group of owner-breeders, joined the team as chief executive officer.

“When Imad brought me on board at the beginning of the year, he said that one of the things that he wanted to develop was the commercial side of of the yearlings,” Voute explains. “He has made a big investment in the stud fees and is continuing to do so with the breeding plans of next year and an upgrade for for this year, whether [for mares] in foal or with foals at foot. And so I spent most of the spring showing the sales companies what we have in its entirety and we've come up with a plan to sell in Arqana, in the Premier Sale, and in [Tattersalls October] Books 1 and 2.”

Key to that new aspect of the operation has been the appointment of Gerry Meehan, widely acknowledged to be one of the best in the business at preparing yearlings for sale, and a former long-time employee at Newsells Park Stud, one of the leading vendors on the scene.

Voute says, “Gerry is a master of yearlings. He worked for Newsells for years and he has topped many sales and prepared many yearlings. He is an excellent person, so we went about headhunting him really. He runs the yearling farm and I think he's looking forward to bringing these three horses to Arqana. He's very on it and has great attention to detail. He knows exactly what he's doing and he's got a good team that he's assembled himself with the show people that he likes.”

There could hardly be a more eye-catching starting point for the Blue Diamond Stud yearling consignment than a close relation to a current Classic winner, and Voute says of Nashwa's sister, “We had her accepted in Book 1 at Tattersalls and Arqana, and the mother is in foal to Frankel, she's carrying a filly, which helped our decision.

“We're really excited. She's a lovely filly, very straightforward. We've got Nashwa, we've got the mother, so we thought we'd take a chance and roll the dice, and we thought it was very sensible thing to do commercially for the farm.”

The second and final member of the draft following one withdrawal will feature in Monday's session. Catalogued as lot 252, he is the only colt in the sale by Invincible Spirit (Ire) and the striking bay is out of the Listed Prix Petite Etoile winner Dawn Of Hope (Ire) (Mastercraftsman {Ire}). The nine-year-old mare's first foal, the 92-rated filly Kind Gesture (GB) (Decorated Knight {GB}), has won twice this year at the age of three in the colours of another owner-breeder, Prince A A Faisal. A full-brother to the yearling colt was sold last year at Tattersalls for 200,000gns to American agent Mike Ryan and, named Variable Cost (GB), he is currently on the work tab in Saratoga.

“Dawn Of Hope raced in France and was very successful. There's a French angle for each of the yearlings, and he'll be the only Invincible Spirit colt,” says Voute.

In the past, Blue Diamond's yearlings have been sold under different consignors, but Voute says that he felt it was time for the stud to take a new direction.

“I've always kept in contact with Imad ever since he sent Authorized to me as a foal and last year he said to me he was going to go down the commercial route,” he explains. “He's still going to race some of the horses and there'll be some families that are out of bounds, like the Pearling family, which is particularly dear to him.

“But I just feel with some of these really bespoke breeding operations that if they could showcase their own yearlings, especially when they are good breeders – and in the nick of time Nashwa comes up as a very current homebred – I think with these small-batch yearling drafts, you can do a really good job, and I think people really take notice.”

With Nashwa being primed for her own return trip to France for a potential run in the G1 Qatar Prix de l'Opera on Arc weekend following her twin triumphs in the G1 Prix de Diane and G1 Nassau S., there should be plenty of excitement still to come this season for the Blue Diamond Stud crew, which Voute has been happy to join.

He says, “It's like being part of a dream team. I couldn't have imagined it, but I got a call in January after I came back from holiday and Imad said 'would you come and help me out?' The first appointment we made was Teddy [Grimthorpe] for the racing, which has been a great success. He's one of the most knowledgeable racing managers that that we know in this country and Imad has bonded very closely with him very quickly. Obviously, we inherited Hollie [Doyle, first retained jockey], which was an inspired appointment a couple of years ago.”

He continues of the farm's broodmare manager Andrew Rawlin, “Andrew was already here. Andrew has been our hidden masterpiece, actually. He's a very knowledgeable guy. He's passionate with the horses and he's out 24 hours, seven days a week, looking at how these horses are raised.

“Obviously Nancy Sexton came on board as well as the bloodstock consultant who's doing all the PR side of things, pedigrees and mating advice, or information that we need. And it's great. I can't believe it all fell into place. We've got a great team, whether that means we're going to be successful with the yearlings or not, I don't know, but we've definitely got the people there.”