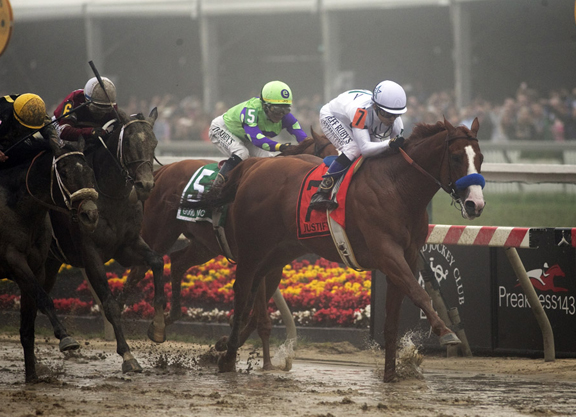 The Mayor and City Council of Baltimore, plus three residents of the Park Heights neighborhood where Pimlico is located, filed suit Tuesday in a Baltimore City court against The Stronach Group (TSG) in order to prevent it from shifting the GI Preakness S. to Laurel. They are also suing the Maryland Economic Development Authority (MEDCO) in an attempt to block it from issuing $120 million worth of bonds, arguing that the money will only add to Pimlico's plight as it is earmarked solely for improvements to Laurel and the rebuilding of a Bowie training center. The Stronach Group has long made it known that it would like to move the Preakness from Pimlico to Laurel.

On Tuesday, TSG released a brief statement in which it said: “These actions are premature and unfounded.” Wednesday, TSG shared with the media a copy of a report done by Gonzalez Research and Media Services that showed that among Maryland voters, only 23% favor spending more than $400 million of taxpayer funds to rebuild Pimlico in Baltimore City. It again released a brief statement, which read: “It's clearly illustrated in this poll that the majority of Marylanders do not support the use of state dollars to rebuild a racetrack at Pimlico. At the same time, there is great interest in keeping the Preakness in Maryland, a steadfast commitment of The Stronach Group.”

The plaintiffs's primary argument is the state law prohibits the Preakness from leaving Pimlico absent a disaster or an emergency and that no such disaster or emergency currently exists. The lawsuit states that TSG could manufacture an emergency at Pimlico by continuing to put little to no money into plant improvements at a track virtually everyone agrees is dilapidated.

“Through the systematic divestment of Pimlico, defendants could indeed manufacture 'an emergency or disaster' to justify transfer of the Preakness to Laurel, as under maintained infrastructure begins to fail and crowds attending Pimlico races and horses racing there are endangered,” the lawsuit states.

So concerned that TSG will do everything within its power to take the Preakness out of Baltimore and close Pimlico, the plaintiffs have asked the court to allow the City to condemn the racetrack and condemn the business that is the Preakness. If the City is successful in doing so it will own not only the track, but the race itself and the trophy, the Woodlawn Vase. The Woodlawn Vase is considered to be among the most valuable trophies in all of sports and worth $4 million.

Should the City take over the racetrack and become the official owner of the Preakness, it would likely sell both the track and race to an outside company.

“People would be lining up around the block if the track and, particularly the Preakness, were put up for sale,” said a source close to the situation.

The Stronach Group took over Pimlico and Laurel in 2011 when it purchased the Maryland Jockey Club. A few years later, it switched its focus to refurbishing Laurel, with the intention of making it what it has called a “super track.” In a Feb. 18 letter sent to Governor Lawrence Hogan Jr., Maryland State Senate President Thomas V. Mike Miller Jr. and the Speaker of the Maryland House of Delegates Michael E. Busch and signed by TSG COO Tim Ritvo, TSG declared its intentions of turning Laurel into a “singular 'super track' serving as the premier venue for major racing events.” It argued that its plan would be for the betterment of Maryland racing as a whole.

The rebuilding of Laurel is already well under way. TSG already receives money from the state from slots revenue from Maryland casinos. According to the Baltimore Sun, 79% of the $112 million spent since 2011 has gone toward Laurel. In the meantime, TSG has reduced Pimlico's annual racing dates to just 12. As recently as 2015, Pimlico raced 37 days.

Legislation is pending in the Maryland General Assembly that would allow (MEDCO) to issue $120 million in bonds, $80 million of which would go toward more improvements at Laurel and $40 million to rebuild Bowie as a training center. None of the money is earmarked for Pimlico. The plaintiffs are seeking a declaration from the court that MEDCO may not issue the bonds.

Earlier efforts to keep the Preakness in Baltimore were made by the Maryland Stadium Authority, which came out with a plan to not only refurbish Pimlico but to create a facility that could be used year-round to host such things as concerts and youth sporting events with additional land used for housing and commercials businesses. The price tag on the project was pegged at $424 million and no one has yet to say how the plans for a new Pimlico would be paid for.

It doesn't appear that either side has done much yet in the way of trying to form a compromise. The City is concerned about losing a civic institution and its efforts to rebuild one of Baltimore's poorest neighborhoods, Park Heights. TSG maintains that there is no need to have two racetracks so close together and that the Maryland horse industry will thrive if Laurel can be turned into a glitzy, state-of-the-art racetrack capable of not only handling the Preakness crowd, but attracting another mega-event in the Breeders' Cup.