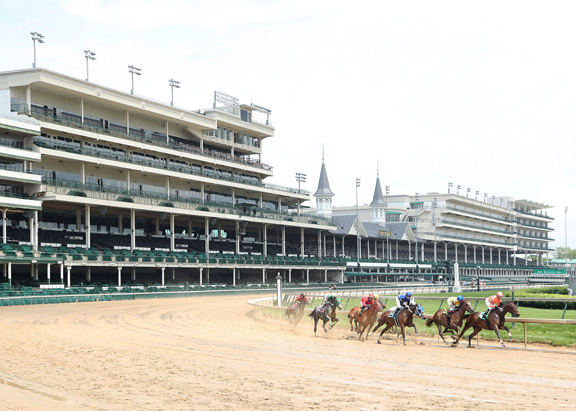 A live bugler played a first-race call to post that echoed and reverberated in front of a cavernously empty grandstand, and track announcer Travis Stone preceded his season-opening call with the declaration that “Better late than never, they're in the gate at Churchill Downs.”

But once the horses were off and running for Saturday's 11-race card, a sense of business-as-usual settled in–at least as defined by the new normalcy terms of spectator-free, pandemic-era racing in America.

“It was surreal. I watched the first race of the season from the infield pagoda, and it was eerie,” Darren Rogers, Churchill's senior director of communications and media told TDN. “The sounds of the horses' hooves, the gate springing open, every little sound was amplified because of the silence all around me. But at the same time, we're thrilled an audience across the country is able to take in the action. They appear to be as enthused as the horsemen are about the return of racing. It's been well received.”

Bettors were limited to advance-deposit wagering options only, but they opened their wallets and let the money fly: Despite a wet racetrack to start the card and no turf racing, Churchill handled $14,278,726, a whopping 183.7% increase from the same Saturday last year.

Participation in the front-side aspects of racing at the Louisville track is limited to “essential” personnel only for the 26-date spring meet, and numerous social distancing and protective personal equipment protocols are in place to prevent the spread of coronavirus.

Over the past 10 days, licensees have also been required to take a one-time COVID-19 test that must come back negative to gain initial entry to the grounds. Then they must also pass daily temperature checks and health questionings to secure a colored wristband that gets them onto the backstretch each morning.

“One of the advantages that we have is that a number of our horsemen have been racing in other jurisdictions that have similar protocols are in place,” Rogers said, noting that Gulfstream Park, Oaklawn Park, and Fair Grounds shippers supplied a good portion of the entries.

Yet shippers from jurisdictions where there is currently no live racing also populated Saturday's program, like Belmont Park, Laurel Race Course, Sam Houston Race Park, and Parx. And horses vanning in from far-flung private training centers also dotted the entries, sending even the most knowledgeable of handicappers scurrying for a list of abbreviations to decipher where those horses have been legging up.

The stabling at Churchill Downs and its satellite facility, Trackside Louisville, is quickly nearing capacity with more than 1,100 horses arriving on the grounds.

Trainer Eddie Kenneally, who won with one of three entrants he saddled on opening day, found it difficult to come up with any aspect of the protocols that needed tweaking.

“No issues at all. Everything was well-prepared. There was lots of thought put into it beforehand, and that allowed for everything to go on really, really smoothly,” Kenneally said. “The track was perfect–got a lot of rain the last couple of days, started out muddy, and ended up being fast. It's great to be back racing at Churchill Downs. This is our home track, and we're absolutely delighted with the day.”

But Kenneally added that his home venue did seem a little spookier than usual.

“It is a little eerie and it takes some getting used to,” Kenneally said. “We [raced without spectators] earlier this year at Gulfstream, and it's very, very different. No betting windows. One TV in the infield. But the most important thing is trainers and owners and jockeys are getting an opportunity to hopefully start making some money by getting an opportunity to complete again.”

But did he feel safe?

Trainer Dale Romans, who ran fourth with his lone starter, told TDN he wasn't quite prepared for the emotions he felt regarding the lack of fans.

“I'm sure glad we could run, but it wasn't a comfortable feeling,” Romans said. “I realized how much I like the fans being there, and all the good energy they bring. It was eerie. It was like being there in the morning for workouts, more than anything.”

As for the protocols, Romans added, “I was very impressed. I thought everything went very smooth for being the first time around. I was apprehensive going into it because I didn't know what to expect. But everyone was doing what they were asked to do and supposed to do to stay safe. I think that we learned that we can handle it.”

Rogers said the track's management team tried to be vigilant about any changes that might be needed to ensure the protocols worked as well in real life as Churchill thought they would on paper.

“The one thing we noticed today with the stable personnel coming over with the horses is after they leave the paddock, they're wanting to watch the race,” Rogers said. “And we're just trying to [remind] them to continue to social distance, not gather in large groups, and be sure to space themselves out. But everybody is understanding, and it's gone well.

“We operate in real time,” Rogers continued. “So any [changes] that we can implement right away, we do.”

Some relatively minor aspects of the plan are a work in progress, Rogers said.

“One thing that we chose not to do is when the horses walk over, we're not utilizing the standard [numbered] bibs for the grooms,” Rogers explained. “We thought it was something that [could contribute to] possible contamination, trading [the bibs] throughout the day, so we've opted not to do that. We think it's important to have some sort of identification when the horses are in the paddock prior to getting the saddle towel put on, but we're still trying to work through that.”

Although the opening-day card lacked a stakes feature, the fourth race, an $85,000 allowance/optional claimer, filled the bill. The one-turn mile featured the triumphant return of 2018 champion 3-year-old filly Monomoy Girl (Tapizar), who had been sidelined since September with a hamstring pull.

Sent postward as the 1-2 favorite, Monomoy Girl stalked in fourth then easily took command at the top of the lane to draw off to a comfortable 2 1/2-length score.

“I felt very confident when she came off the turn in front,” trainer Brad Cox said. “It was a great race off the layoff. It was very positive seeing her be able to rate behind horses like that.”

Jockey Florent Geroux added that “she was able to rate a lot easier today than when she was three years old. She gave us all the signs in the morning that she was ready. I think it is on to bigger things.”