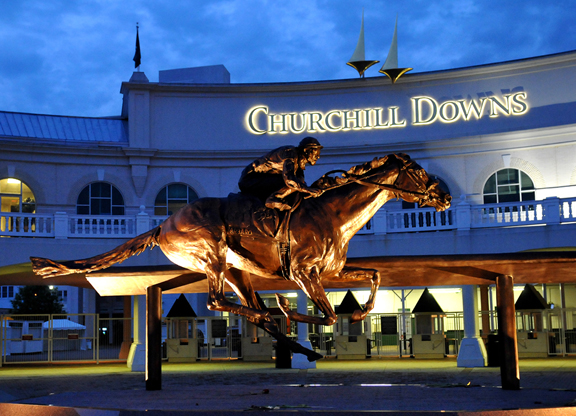 With Saratoga, Del Mar and a number of other tracks effectively eliminating jockeys from coming and going due to fears they will spread the coronavirus, attention now turns to Churchill Downs and the GI Kentucky Derby. Churchill Downs President Kevin Flannery and his team are no doubt mulling whether or not they will put similar restrictions in place, effectively allowing only Kentucky-based riders to compete during the five days of racing. It's not exactly an easy call, but their number one priority has to be safety. And that means following the Saratoga and Del Mar lead, locking out riders from New York, California and elsewhere. That's the right call.

Only a few weeks ago, this didn't look like a problem. For the most part, jockeys are young and healthy and there were only a handful of instances where riders had gotten the virus. Those who had were showing little, if any symptoms. That began to change with the news that Luis Saez had the virus. Before it was discovered that he was affected, he crisscrossed the country, riding in New York, Kentucky, Indiana and California. It's impossible to tell if the presence of Saez, or any other jockey, caused other riders to become sick, but something was definitely going on. Victor Espinoza announced that he had tested positive and so did Flavien Prat and Gerard Melancon. Then it was Florent Geroux. Then came word that 15 jockeys at Del Mar had tested positive, which forced management to cancel racing Friday, Saturday and Sunday.

Tracks discovered that allowing jockeys to come and go was an accident waiting to happen. NYRA was among the first to act. Only jockeys that were considered regular members of the Saratoga colony would be permitted to ride and if they left to go elsewhere they could not return before the meet was over. NYRA called it a common-sense approach that prioritized the health and safety of its riding colony. Del Mar enacted similar rules. By having a contained pool of riders that could be monitored daily the risks would be mitigated.

The new rules have already caused some problems for riders. Irad Ortiz, Jr. had to give up the mount on Dr. Post (Quality Road) in the GI TVG.com Haskell S. at Monmouth. It doesn't appear that Mike Smith will be available to ride Midnight Bisou (Midnight Lute) in the GI Personal Ensign S. at Saratoga. It seems unlikely that Luis Saez will sacrifice the remainder of the Saratoga meet to go ride Maximum Security (New Year's Day) in the Aug. 13 GI Pacific Classic S. at Del Mar.

Being locked out of races like the Derby and the GI Kentucky Oaks would be that much worse. For Manny Franco, who has never ridden in the Derby and has the assignment on possible favorite Tiz the Law (Constitution), it would be devastating to miss the race. The same goes for Tampa Bay Downs regular Samy Camacho, the rider of King Guillermo (Uncle Mo). Riders like Smith, Ortiz, Prat, John Velazquez, Joel Rosario and Javier Castellano are just a few others who might be forced to sit out Derby week at Churchill.

That would be more than unfortunate, but this is the world we live in. Nothing is easy and sacrifices have to be made when it comes to keeping everyone safe.

Dr. Ghazala Sharieff, corporate vice president and chief medical officer at San Diego's Scripps Health, was talking about the rider situation at Del Mar when interviewed by the TDN, but her words should resonate throughout the sport.

“I get it, people are social,” said Sharieff. “It's across the board, people feeling like, 'The county's opening up, we're safe.' But that's actually the wrong message, and now we're closing back down again for the same reason–people aren't being careful. And if [individuals] want to keep racing, they're going to have to do better.”

She's right. It's not just the health concerns. Just imagine the negative publicity racing would receive if a rash of coronavirus positives among jockeys came out of the Kentucky Derby and how that might impact the decision makers who can put a stop to the sport anytime they want.

It also needs to be noted that, after a period when things seemed to be under control, the number of coronavirus cases in Kentucky is rising sharply. On Sunday, the state reported the highest single-day increase in COVID-19 cases and three new deaths. Gov. Andy Beshear announced that there were 979 new cases of coronavirus reported in Kentucky and said it was “by far” the biggest jump in cases experienced so far in the state. There were 208 cases alone reported in Jefferson County, the home of Churchill Downs. The numbers make one wonder if Beshear is having second thoughts about allowing a limited number of spectators to attend the Derby.

“This ought to be a wake-up call for everybody,” Beshear said.

Churchill may not have to make a decision within the next few days, but neither can it wait until the last minute. No matter what they decide, this will be a complicated process and jockeys, trainers and owners will need time to formulate their plans.

Testing procedures and requirements must be set up. What determines who is a “Churchill Downs regular,” which is not a black-and-white issue considering that Churchill will be opening up for a five-day meet preceded by racing at Ellis Park and followed by racing at Kentucky Downs. And what about out-of-town riders who are willing to make sacrifices required of them in order to ride in the Derby? If they are willing to go into quarantine for 10 or 14 days beforehand, why wouldn't they be allowed to ride during the week at Churchill? That would also likely mean they would have to stay on the sidelines for a period of time before being allowed to return to riding at their regular tracks, but for how long? For someone like Franco, it might be worth the trouble. Whatever they chose, they need to know what their options are.

It's terrible that we are even debating these points or considering regulations that would keep many of the sport's best jockeys from participating in the Derby. But theses are not normal times and a Kentucky Derby on Sept. 5 is anything but business as usual. There are plenty of very good riders who call the Kentucky circuit home. Hand the reins to them, and keep everybody safe.