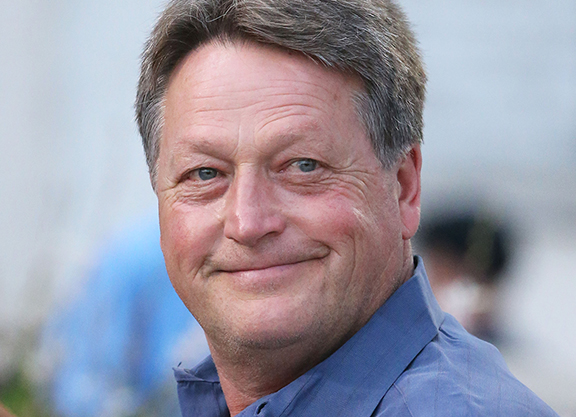 Few felt the jarring absence of the GI Kentucky Derby, or indeed any racing at all, on the first Saturday in May at Churchill Downs more acutely than a Louisville native. Add to that being a horseman who relies on the track's customary spring/summer meet to make your living, throw in having a Derby hopeful in your barn to boot, and one can understand why longtime Churchill-based trainer Greg Foley was so excited to be back home this week, with racing set to resume Saturday beneath the Twin Spires.

“It's already so different, but I tell you, you come in, you see the track, and it feels so good to just be home,” he said. “Everything is good now, man. It feels so good.”

Foley is unique in that, while he runs his horses elsewhere in the midwest, he points specifically to the Churchill meets. Keeneland in April and October, circled in bold ink on most trainers' calendars, is generally a stepping stone for Foley's horses to produce their best efforts when racing shifts to his neck of the woods. That's why the 62-year-old conditioner sits in seventh on the all-time wins list at the 145-year-old oval, mingling among Hall of Fame names like Bill Mott, Steve Asmussen and D. Wayne Lukas.

Spending his winters at Fair Grounds in New Orleans, Foley was ready to come home with his wife and two sons, all involved in the family business, several times this spring, only to be told along with the rest of Churchill's horsemen that it wasn't safe yet. So they have been stuck in limbo essentially since Mar. 21, closing day at Fair Grounds.

“Everybody was ready to ship home and we kept getting pushed back,” Foley said. “They canceled the ship-in date to Churchill twice; we were regularly supposed to be in there Mar. 19. Everyone's ready to come home at the end of the [Fair Grounds] meet anyway, then you add on having to spend another 40, 50-something days stuck there where you can't race. That was no good. You try to keep your owners from getting too excited or too upset about not running. All of mine dealt with it pretty well, so I was lucky in that aspect of it.”

“We were all tested two or three days before we left Fair Grounds,” he said. “Anybody coming into Churchill has to be tested. Anybody. They tested us all before we left and they got the results back in 24 hours. Thank goodness we were all fine and had no problems. I had a few guys who didn't go to New Orleans who work for me, they were tested here at Churchill. I don't think they're going to let the owners back here. They're very strict on that.”

Beyond testing, Foley added that Churchill officials are mandating daily temperature checks and mask wearing to try to prevent any outbreak once everyone is settled in.

“They're taking your temperature every day as you come in the gate,” he said. “They put a wristband on you, a different colored one every day. The help has to go down to the rec hall every day between 10 a.m. and 2 p.m. to have their temperatures taken. Everybody's got to wear a facemask back here too. So they're on it pretty good.”

While the desperately needed familiarity of horses racing will return to 700 Central Avenue this weekend, the spring meet took a major hit when the Derby had to be postponed for four months, a hit that Foley says reverberates through his life as well as the Louisville community at large.

“That whole week, with Oaks and Derby, for some of my owners that's the only week I see them all year,” he said. “We missed all of that. Shoot, it's just huge for Louisville financially, for the fans, and for us. This whole deal is really messed up. I hope we never see it again.”

The blue-collar Foley stable is also in the rare position of housing a potential Derby starter, who would be their first, in Lloyd Madison Farms homebred Major Fed (Ghostzapper). A sharp second-out graduate on New Year's Day at Fair Grounds, the dark bay stepped right into stakes company and proved his mettle when runner-up in a division of the GII Risen Star S. Feb. 15 at Fair Grounds. He was then fourth despite a poor start, wide trip and unfavorable pace scenario in the GII Twinspires.com Louisiana Derby on closing day. With no Derby to aim for, Foley relaxed Major Fed's training a bit, but has ratcheted it back up with the GIII Matt Winn S. next Saturday at Churchill now in sight.

“I kind of backed off my horse a little after the Louisiana Derby, just played around with him, jogged, galloped for 10 days to two weeks,” he said. “Then he went on back and had scheduled works, and he's ready to go. He looks fantastic. I worked him Thursday before we left New Orleans, he went in 1:00 4/5, galloped out in 1:14, did it really easy. I'm tickled to death with him. I'll breeze him one more time either Friday or Saturday over the track here at Churchill, probably just a half-mile, and let him gallop out good to have him ready on the 23rd. That race will come up plenty tough enough.”

That much is fair to assume, based on the dearth of major 3-year-old races available for sophomores who would normally be peaking right now, as well as the response from Churchill's horsemen to the track reopening. When entries were drawn Tuesday for Saturday's opening day card, a whopping 162 horses were entered for 11 races, including champion Monomoy Girl (Tapizar), who is slated to make her long-awaited return in race four.

“Everyone and their brother's gonna be trying to get in a race,” Foley said. “It's gonna be tough racing. You'd better be ready to go.”

While the competition will be stiff, Foley and his fellow Churchill stalwarts finally have the certainty of opportunity on the calendar. That, and the comforts of home, will carry the day for Team Foley until things are fully back to normal.

“My help were really good, they were homesick too and they hung in there,” Foley said. “Everybody's just so glad to be back, to get to Saturday and get racing, and hopefully get some fans in here before too long.”