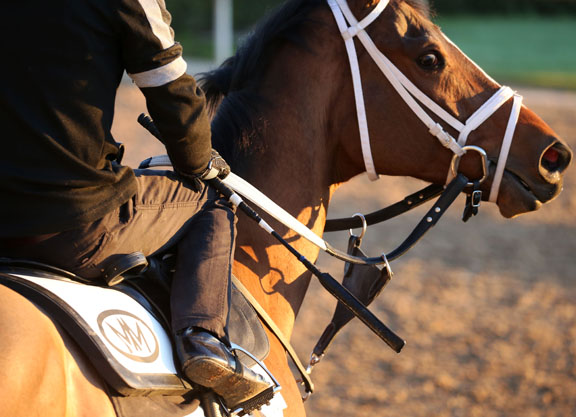 As anti-whipping rules continue to evolve nationwide, one problem area that has emerged is the fairness of penalization. Do the various systems of fines and suspensions match the severity of the violations?

Or, put more directly, are there ample deterrents on the books to keep a jockey from totally disregarding the number of times and manner in which a Thoroughbred is struck with the whip if the rewards of winning an important graded stakes like a Breeders' Cup race far outweigh the comparatively small dent a penalty might make in a jockey's wallet?

But after hearing testimony from both proponents and opponents on the separate ideas to redraw the minimum fine and penalty structures while also giving stewards leeway to penalize jockeys 50% of purse earnings if they violate the whip rule while finishing first, second or third in graded stakes, the CHRB voted 4-3 to table the motion for the time being.

However, Ferraro added that “I am concerned after this discussion that the rule concerning graded stakes races may be a little harsh.”

Shane Gusman, an attorney representing the Jockeys' Guild, argued against both aspects of the proposed amendment. He said in the first instance, the economic reality of mandating a minimum $500 fine (as opposed to the current “up to $1,000” fine that isn't often maximally imposed) would be too much of a hardship for most day-to-day jockeys in the state, especially if their whip violation was not overly egregious.

But Gusman also took umbrage with the half-the-earnings penalty in graded stakes, and he further argued that the CHRB's entire structure of the anti-whipping rule was unfair because it “continues to focus on the jockey” instead of penalizing the entire team that owns and trains a horse.

As soon as Gusman uttered those words, Ferraro interjected. “The jock is the only one with a crop in his hand,” he said. “What's the owner and the trainer got to do with it?”

Gusman replied by way of example: “It wouldn't be absurd to think that an owner and a trainer might say to their jockey, 'Win at all costs. I don't care [how] you use the riding crop. We'll figure it out.”

The last bit of that reference alludes to the connections of a horse offering to pay a jockey's fine if he gets penalized. Ferraro didn't buy that line of reasoning.

“Again, the jockey is the one that has control of the crop,” Ferraro said. “Is his trainer willing to pay the 50% [of the earnings] fine? I doubt it. There's an easy way to avoid the fine, and that's not to violate the rule.”

Two retired Hall-of-Fame riders weighed in on the subject.

The first, Darrel McHargue, now the CHRB's chief steward, argued in favor of the stiff graded stakes penalty. “If you put in a 50% penalty for a jockey's earnings, it disincentivizes that jockey from violating that rule,” he said.

The second was commissioner Alex Solis, who argued against increased penalties by citing three chief reasons: 1) The lack of national uniformity in anti-whip rules; 2) The fact that California riders are vacating the state because whip rules are already too strict, and 3) That the notion of docking a rider 50% of his earnings in a big race was “ridiculous.”

Solis said that, “When they have the whole Racing Integrity and Safety Act [framework put into effect nationally], who knows what they're going to come out with?”

Solis later added, “We just changed these rules not even, what, a year ago? And everybody's struggling [to comply]. They are doing a good job. I've talked to a lot of them, and they don't like it, of course. They say, 'We try. We do our best.' Now we're going to penalize them even more?”

Vice chair Oscar Gonzales said that the CHRB is trying to be “reform-minded” in crafting its anti-whip rule.

“We want to make sure horse racing isn't just hanging on by a thread, that we thrive, and that we are looked at by the public and potential owners as an industry that is in it for the long run,” Gonzalez said. “I agree with commissioner Solis that California jockeys are doing a great job, that they have proven to be resilient and have proven to be understanding of what we are trying to accomplish…”

But, Gonzalez added, he believes it's imperative for the board not to only hone proper day-to-day rules, but to keep in mind the need to “get the big event right,” which in his eyes means the Nov. 5 and 6 Breeders' Cup hosted this year by Del Mar.

“This rule is [about] making sure that the upcoming Breeders' Cup goes off [more] smoothly than anything else,” Gonzalez said, underscoring that with an influx of international riders who could be confused by trying to keep straight varying jurisdictional versions of whip rules, he wants to avoid “creating a wild west type of a situation.”

Commissioner Dennis Alfieri advocated for tabling the measure, noting that Solis made a good point about California's already troubling outflux of owners, trainers and jockeys.

“What's happening here is that we're making it so extreme that horses and jockeys are leaving the state and are planning to leave the state,” Alfieri said. “Enough is enough.”

The commissioners voting in favor of tabling the rule modifications were Ferraro, Solis, Alfieri and Damascus Castellanos.