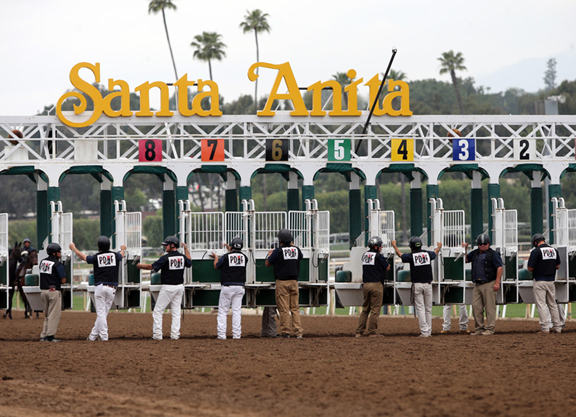 No illegal medications or procedures were uncovered in the long-awaited California Horse Racing Board (CHRB) report on the 23 horse deaths at Santa Anita Park during the 2018-19 December-March period.

The summary of the investigation, nearly a year in the making, was made public on Tuesday (read the full version here).

It is replete with common-sense recommendations regarding horse welfare, track safety, training protocols, a focus on pre-existing conditions, and proposals to expand the list of prohibited medications and practices. Yet many of these ideas have either already been adopted or are in the process of being addressed by new CHRB regulations and house rules at racetracks.

But the report also contains some broader concepts that, if implemented, would change both the physical infrastructure and the culture of racing at Santa Anita, and perhaps all of California's tracks.

The recommendations that fall under this category include having Santa Anita management “continue to consider” switching the main track back to a synthetic surface, making room in the stabling area for a “paddock turn-out where horses can be outdoors and with more space,” and replacing the claiming system entirely with either merit racing (horses ranked into class levels by racing officials) or auction races (horses sold to the highest bidder after, not before, the race).

In the more immediate future, California trainers could see horse management changes that get mandated as a contingency of stall applications and/or horsemen's agreements, such as being required “to maintain simple health records on individual horses in their care” and to attend continuing education classes that focus on health and safety.

The report backs up the need for increased trainer responsibility based on findings that emerged from the in-depth study of the 23 fatalities.

“From the 23 cases, 16 horses were under the care of trainers with at least one other fatality within a 12-month period,” the report states.

“Furthermore, two trainers had multiple fatalities within this cluster, and a third had a second fatality later in the same race meeting,” the report states.

When given the opportunity to review necropsy findings, “the majority of horsemen did not review the necropsy reports on their horses; furthermore, many did not display good working knowledge of anatomy or grasp the significance of major pre-existing lesions,” the report states.

“Record-keeping by the horsemen involved in the investigation overall was poor save in a couple of instances,” the report states. “Large gaps in historical information were noted in case histories for the affected horses.”

Based on gross pathology, of the 22 CMIs, 21 horses had evidence of pre-existing pathology at the site of their fatal injury. The one horse without demonstrable pre-existing lesions had a history of multiple intra-articular corticosteroid injections at the site of fatal bone failure.

However, “the injected joint was not necessarily the fatally injured joint,” the report notes.

“There were cases of what appears to be overuse of intra-articular therapy even though the treatments did not violate then-existing CHRB medication regulations,” the report states.

“There were instances of repeated intra-articular injections without diagnostic imaging,” the report continues. “One horse was being treated by two veterinarians without communication or even an awareness that the other was similarly treating the horse. In one case two veterinarians injected the same joint within five days of each other. In that case, it was the major weight-bearing bone in the joint that ultimately failed in the race. Surprisingly, there were instances of poor communication between veterinarians in the same practice treating the same horse.”

Four horses received extracorporeal shock wave therapy as currently allowed within CHRB regulations. But the treated structures “were not the structures that were fatally injured,” the report states.

One horse received the medication Osphos, a bisphosphonate, on two occasions. Bisphosphonates are labeled in horses to control the clinical signs associated with navicular syndrome in horses four years and older. The report states that “the horse was a 3-year-old when treated and did not have a diagnosis of navicular disease.”

The majority of CMI cases (14 of 22) exhibited a high-intensity exercise profile followed by a decline in activity in the month prior to CMI.

Over a third of the CMI cases (8 of 22) were 3-year-old maidens. All eight had made five starts or fewer, one being unraced. Five of these had at least one month of high intensity activity (defined as greater than one standard deviation from the mean value of controls) in the previous four months. Two of the three cases that did not demonstrate high intensity activity as compared to controls did have multiple gate workouts in the near term.

A relatively new term that the California racing community might be hearing more about as a result of the report is “cumulative high-speed furlongs” as a way to measure potential physical toll on racehorses.

“Eight of the 22 CMI cases were horses that had accumulated more high-speed furlongs (via races and timed workouts) than control horses in the past 12 months,” the report states. “Four of these horses also had significant periods of inactivity in the same time frame, suggesting that exercise intensity was at very high levels during the intervals when the horses were in full training.”

Nearly a third of the CMI cases (7 of 22) had a history of at least six months between race starts at some point in their respective careers. Four of these had recently returned from a layoff and had made five return starts or fewer at the time of CMI.

Last year, it was anecdotally postulated that heavy rains played an adverse role in horse health at Santa Anita, either directly by causing wet tracks or indirectly via how the racing surfaces had to be managed.

“The data suggests that 39% of the fatalities occurred on surfaces affected by wet weather,” the report states. “Although several trainers expressed concern over the condition of the track due to the weather, none blamed the track itself for any fatality.

“The study indicates a correlation between fatalities and surfaces that have been affected both by heavy rains and the extraordinary procedures needed to maintain them for racing and training,” the report continues. “The presence of pre-existing pathology, coupled with aggressive veterinary treatments described herein, may have resulted in horses that were physically compromised running on compromised surfaces, resulting in an extraordinary number of fatalities.”

The report also examines the “pressure to race” allegations against Santa Anita management as they related to racehorse fatalities.

“While several trainers said during investigative interviews that they felt pressured to run their horses, only one gave a specific example,” the report states.

Other recommendations from the report (some of which are already in the works) include:

In response to the CHRB report, The Stronach Group, which operates Santa Anita, issued the following statement:

“The California Thoroughbred racing industry and The Stronach Group have, over the last year, implemented unprecedented and effective reforms. This effort, led by Governor Newsom and the California Horse Racing Board (CHRB), is well documented in the recent report issued by the CHRB. We look forward to a full review of that report and to working with the Governor, the CHRB and the California legislature to continue the progress made to date. There has been a 64% reduction in catastrophic injuries at Santa Anita Park this year, and we have not had a single fatality during racing on our main track for the entirety of this season. While the first number represents a positive development, the second number is always the goal. We welcome the opportunity to work together with our industry partners to implement the suggested reforms and to make 2020 a year we can all be proud of.”

Donna Brother issued a response on behalf of the Thoroughbred Safety Coalition:

“The loss of any equine athlete is felt by all of us in the Thoroughbred racing community. We can and will do better.

This report provides our community with an important opportunity to reflect on and learn from its findings. Members of the Thoroughbred Safety Coalition will study it closely as we work to implement meaningful reforms on a national level. Transparency and accountabilitygo hand-in-hand with ensuring that our horses and riders are racing under the safest conditions possible, and we applaud the CHRB for the effort and resources that went into compiling this report.

The immediate and significant reforms implemented in California over the last year by tracks and horsemen, in close coordination with the CHRB and leading industry experts, have made a material and positive impact on the safety of our athletes. Theprotocols that have been put in place to-date have provided a promising start upon which the Thoroughbred Safety Coalition and our partners are building. On behalf of the Coalition, I look forward to continuing to harness unprecedented collective actionto enhance the culture of safety in our sport.”