Charlatan Looks Like The Real Deal in Two-Turn Demolition 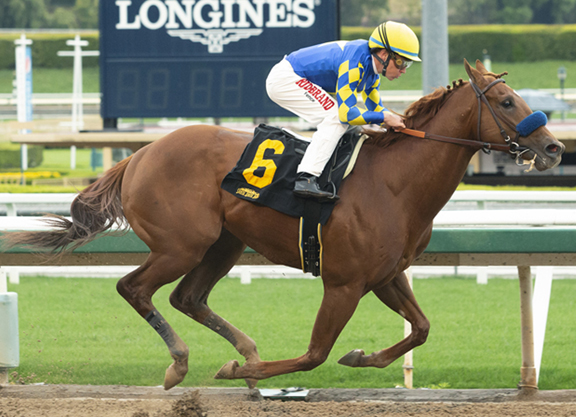 6th-Santa Anita, $57,000, Alw (NW1$X), Opt. Clm ($80,000), 3-14, 3yo, 1m, 1:36.24, ft.
CHARLATAN (c, 3, Speightstown–Authenticity {MGSW & MGISP, $883,362}, by Quiet American) made 30 cents on the dollar seem like Christmas in March and is on to bigger and better things following a thoroughly convincing 10 1/4-length allowance victory Saturday afternoon at Santa Anita. Quickly into stride from the outside gate in a scratched-down field of five just minutes after stablemate and fellow 'Rising Star' Nadal (Blame) stamped his authority on the GII Rebel S., Charlatan looked to settle well enough through an opening quarter-mile in :23.14 and skipped along ears-pricked past the half-mile in :46.86 while setting the pace a bit off the inside. Always clear of his rivals, the $700,000 Keeneland September yearling hit the quarter pole after three-quarters in 1:11.04 and opened up at will from there, clocking a respectable :25.20 for the final two furlongs while never asked for anything approaching a top effort. “We don't know if we'll run here in the [GI] Santa Anita Derby [Apr. 4], because nobody's really sure when anything is going to happen,” said trainer Bob Baffert. “Whenever they cancel the Masters, that's like the Derby…I've never seen anything like this, it's kinda scary. Hopefully they can get everything under control.” A chestnut who bears a physical resemblance to his sire, Charlatan earned a debut 105 Beyer Speed Figure in posting a 5 3/4-length victory (raw time 1:08.85) at Santa Anita Feb. 16.  Charlatan, whose dam placed twice at Grade I level at Santa Anita. is a half to Hanalei Moon (Malibu Moon), SW-US, SP-Can, $295,090. Authenticity, a $1.2-million purchase out of the 2013 Fasig-Tipton November Sale, is the dam of the 2-year-old colt Bennyfromthebronx (Tapit) and a yearling filly by Into Mischief. She was most recently covered by Curlin. Sales history: $700,000 Ylg '18 KEESEP. Lifetime Record: 2-2-0-0, $67,200.
Click for the Equibase.com chart or VIDEO, sponsored by Fasig-Tipton.
O-SF Racing LLC, Starlight Racing, Madaket Stables LLC, Stonestreet Stables LLC, Frederick Hertrich III, John D Fielding & Golconda Stables; B-Stonestreet Thoroughbred Holdings LLC (KY); T-Bob Baffert.