Charlatan Likely to Saudi Cup Next 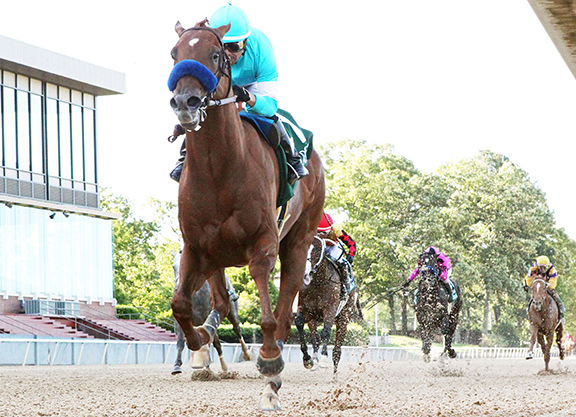 After Charlatan (Speightstown) worked a half-mile Saturday in :49.80 at Santa Anita, trainer Bob Baffert reported that his Grade I winner will likely make his next start in the Feb. 20 Saudi Cup. Charlatan is coming off a dominant win against a quality field in the Dec. 26 GI Runhappy Malibu S., his first after being sidelined following the GI Arkansas Derby May 2.

Charlatan has been invited to the GI Pegasus World Cup on Jan. 23 at Gulfstream, but will likely pass that race. Should Charlatan pass the Pegasus, the role of favorite will go to Knicks Go (Paynter), who will be ridden by Joel Rosario.

“He breezed today and it was a very, very nice work,” Baffert said of Charlatan. “We are leaning toward the Saudi Cup. I don't want to bring him back too quick. He came out of the Malibu really well. He always showed that he was a brilliant horse.”

So far as his top 3-year-old colts go, Baffert has begun plotting a course for Life is Good (Into Mischief) and Medina Spirit (Protonico), the one-two finishers in the GIII Sham S.

“Life is Good came out of his race really well,” he said. “We are looking, maybe, at the [GII] San Felipe [S. Mar. 6] for him. That could change. He will be nominated to everything, but it will either be the San Felipe or the [GII] Rebel [S. Mar. 13] for him.”

“I don't know what we're going to do with Medina Spirit. He will also be nominated to everything. What I usually do this time of year with horses like him that are breezing, they are all nominated everywhere and whoever breezes the best gets on a plane.”

Gamine (Into Mischief), the leading contender for the Filly & Mare Sprinter title, recently returned to the Baffert stable after spending time at Trifecta Farm and has yet to resume serious training. She won the GI Breeders' Cup Filly & Mare Sprint in her most recent start.

“We gave her a little break and it looks like she filled out a bit,” Baffert said. “I'll probably aim her for the [GI] Derby City Distaff S. at Churchill during Derby week.”

In Varda (Distorted Humor), Kalypso (Brody's Cause) and Frosteria (Frosted), Baffert has a trio of contenders on the road to the Apr. 30 GI Kentucky Oaks. He said Varda and Kalypso will likely go next in the GII Las Virgenes S. Feb. 6. He said he would find a maiden race for Frosteria before putting her back in stakes competition.