Home » Archive » Top News » Chapa: “I Used a Buzzer When I Knew Full Well It Was Wrong”

Chapa: “I Used a Buzzer When I Knew Full Well It Was Wrong” 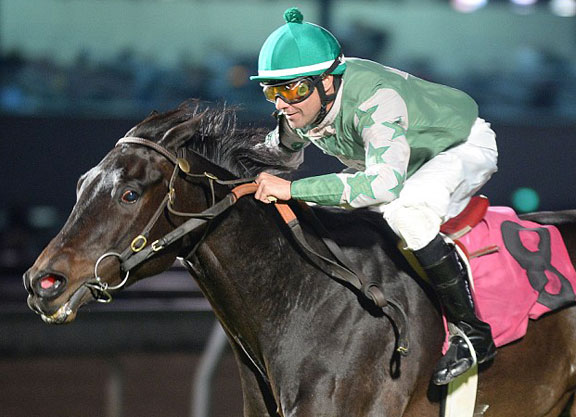 After serving a five-year suspension and paying a $100,000 fine for using an illegal electrical shocking device on a Thoroughbred at Sam Houston Race Park in 2015, jockey Roman Chapa on Thursday got his riding license reinstated by the Texas Racing Commission (TRC), a spokesperson there confirmed.

On Friday morning, the 48-year-old jockey crossed the state border into New Mexico to meet with Sunland Park stewards to discuss whether they would allow him to ride there.

Izzy Trejo, the executive director of the New Mexico State Racing Commission, told TDN he was unsure if Chapa had actually submitted a written application. But he added that in light of Chapa's history of suspensions and his criminal record, “I'm sure that [the stewards] would review [any application from Chapa] pretty darn closely, and do what's in the best interest of horse racing here in New Mexico.”

Chapa's rap sheet includes a 2017 guilty plea to felony charges of making false statements to a Texas state investigator during that 2015 “buzzer” case. He was given an order of deferred adjudication and was placed on “community supervision” probation for 10 years as a penalty, while a related felony charge of “unlawful influence on racing” was dismissed.

Prior to that, Chapa had twice been suspended in Texas (1993) and New Mexico (2007) for attempting to frighten a racehorse into running faster with an illicit object.

In addition, the Houston Press reported that in 2001, Chapa was charged with one felony count of cruelty to animals when a Harris County sheriff's deputy responded to a call about a man reportedly beating a Boxer dog with a leather strap. Chapa pled guilty to a lesser offense and served 10 days in jail, the Press wrote.

When TDN reached Chapa via phone Friday afternoon to ask for his side of the story, he said he was on horseback and could not speak. He agreed to talk later, then changed his mind when a reporter called back. Chapa said he preferred instead to answer questions via text messaging. He subsequently texted the following statement:

“I am profoundly humbled by these past five years. It has been very hard on me and my family. I wholeheartedly apologize to everyone that my actions affected. I was wrong. I used a buzzer when I knew full well it was wrong. I cheated, and I got caught.

“That is not how I was raised and that is not the man I am now. I want to spend the rest of my career as a jockey earning back the trust of everyone.

“Horse racing has received bad publicity recently and I can't help thinking that I was part of the reason. That saddens me deeply. I want to be part of good publicity for this beautiful sport.

“Mine was the largest fine, $100,000, and the longest suspension, five years, in Texas racing history. It was deserved.

“I want to thank the Texas Racing Commission, in particular Virginia Fields, for renewing my license. I will not betray the trust you put in me. I also welcome the opportunity to work with ANY racing commission in the country to make horse racing better.

“I love horses and horse racing. Horses are my life. My actions five years ago betrayed their beauty and grace as athletes. I am capable of doing better. I will do better. I'm doing better now. See you in the starting gate.”

The granting of a racing license by the TRC does not mean that Chapa, who was often a standings-topping rider in the Southwest region between 1993 and 2015, can resume riding immediately. His participation in the sport is still subject to “house rules” at individual racetracks, whose managements could utilize private-property stipulations to keep him from riding at their venues.

Chapa was asked via text if he has been keeping in riding shape.

“Yes I have,” Chapa texted. “My mother-in-law has a small stable of race horses and I'm actually in great shape.”

But when TDN began to delve deeper into exactly where and under what circumstances Chapa has been riding during the past five years, Chapa's texted responses slowed and then stopped altogether.

Specifically, TDN wanted to know if Chapa has fully recovered from grave injuries that he sustained while allegedly riding in an unregulated Quarter Horse match race at an unsanctioned “bush” track in Memphis, Tennessee, in 2017.

Unregulated “bush tracks” exist throughout the United States. These events generally host match races between Quarter Horses, with owners putting up stakes in the form of bets. The drugging of horses, the fixing of races, and the permissibility of electrical shocking devices are the stuff of lore whenever one of these tracks gets discovered and raided by U.S. authorities, which happens a handful of times in any given year. There is generally zero veterinary oversight for the equine competitors and no ambulance service for riders who get injured.

According to archived social media posts, the Memphis track–known informally as both “Carril de Memphis” and “Carril el Gringo”–ran  a 14-race card in July 30, 2017. Numerous Facebook photos and videos documented the action. Both rails of the straightaway were packed with tailgating fans who cheered lustily. Festive music blared and beer flowed. Horses broke from a rusty, four-stall gate and there was even a photo-finish camera to settle close races.

The 2 p.m. race was a 250-yard match between La Borregita and La Golondrina. No jockeys for any of the races were named on the entry sheet. A live Facebook video (see it here) with the translated title “Hope our friend Chapa is okay” shows two horses veering in sharply toward each other after leaving the starting stalls. They bump in the center of the straightaway. La Borregita then careens outward to the rail, dislodging the jockey, who falls off awkwardly to the left while the horse runs off riderless.

The video shows onlookers rushing to the stricken rider. A witness, presumably the person shooting the video, can be heard three times referencing “Chapa” as the fallen jockey.

The next day, a Facebook page belonging to Carreras del Mundo, a carril racing fan site, posted a message that translates to “Asking for your prayers for a speedy recovery for our friend Chapa. Yesterday he suffered an accident at Carril el Gringo.” In subsequent weeks, Chapa's family members posted medical updates on social media. His injuries were detailed as three broken ribs in front, five broken ribs in back, a collapsed lung, three fractured vertebrae, and kidney function difficulties.

TDN referenced that video in a text message to Chapa, asking if he had recovered from his 2017 injuries. Chapa wrote back, “Yes sir.” Asked how long he had been hospitalized, Chapa responded, “Not long.”

After that, Chapa stopped responding to text messages sent by TDN