Channel Maker Gets Another Belmont Grade I in Man o' War 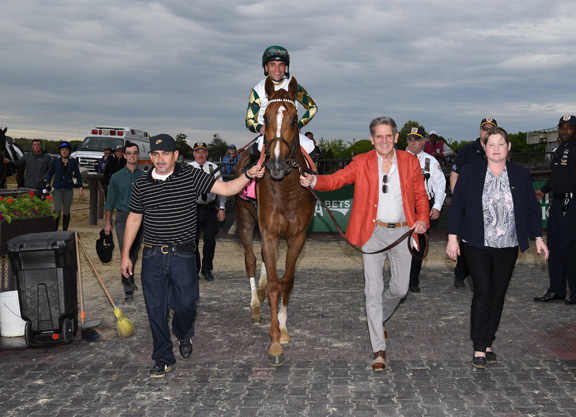 Channel Maker, trained by Hall of Famer Bill Mott, wired the GI Joe Hirsch Turf Classic with a gaudy 108 Beyer Speed Figure the last time he stepped foot on the local lawn back in September, and was off the board in a pair of attempts at Gulfstream since, a fifth-place finish in the GI Pegasus World Cup Turf Invitational Jan. 26 and a fourth-place finish to Zulu Alpha (Street Cry {Ire}) in the GII Mac Diarmida S. Mar. 2.

The 6-1 shot sat third early as Hunting Horn (Ire) (Camelot {GB})-one of two Aidan O'Brien invaders-zipped out to take a clear lead through sharp fractions of :22.98 and :47.47. Hunting Horn, fourth in the G1 Dubai Sheema Classic last time Mar. 30, seemed like he might just forget to stop as he headed for home still with a significant advantage, but he grew leg weary by midstretch and the cavalry charge started to bear down on him.

Channel Maker was the first to collar him, and he kept on to the wire, holding off a flourish from Arklow, who rallied smartly from last of nine. The filly Magic Wand (Ire) (Galileo {Ire}), the other O'Brien runner who was runner-up in the Pegasus World Cup Turf, wasn't far back in third, while Hunting Horn rounded out the super.

“He's a good horse and runs hard all the time,” winning rider Joel Rosario said. “I'm glad we got the money today. I thought the horse [Hunting Horn] around the last turn might keep going, but I thought he was going too fast for the distance and the last half-furlong would be tough to get. I felt confident, and he's [Channel Maker] the kind of horse that has a good, strong stride. The more you ride him, the more he gives to you.”

On possibly making his next start in the GI Manhattan on Belmont S. Day, June 8, co-owner Randy Hill said, “I'll leave that to Billy Mott, but I'm sure after the way he ran today that he's got the Manhattan right on his radar.”