Change Of Focus For Newsells Park 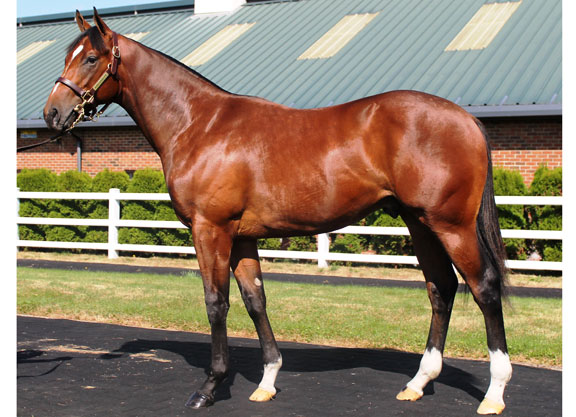 A top-tier consignor not readily associated with Goffs UK's Premier Yearling Sale is Newsells Park Stud, but the Hertfordshire-based nursery is heading north this week armed with what general manager Julian Dollar said he believes is by far the strongest draft they have ever brought to the sale.

“I really think it's the best draft of horses we have brought to Doncaster, not just on paper but as physicals as well,” he says.

Normally at this stage, Newsells Park would have already kicked off its sales season with a draft of yearlings at Deauville, but a change in policy this year has seen Dollar concentrate his earlier-looking types at Goffs UK, a sale that has evolved in recent years to include a more 'Classic' type animal.

“We decided this year to give Arqana a miss for the first time in a while. We thought we would just take a step away for a year and review our policy,” explains Dollar. “Arqana is a great sale and French breeders have really upped their game in recent years and we probably didn't send as high a calibre of horse there the last couple years as we did, say six or seven years ago. So we will just take a year out and review the situation again with the intention of going back there perhaps next summer or the year after.”

He continues, “There is also the logistical advantage of staying close to home at this time of year. A trip to France represents quite a strain on operations with staff deployed with the yearlings for a full week while the farm's other yearlings, many destined for Tattersalls Book 1, still require full attention. Going to Doncaster still represents an upheaval but for less time.”

Sending a batch of yearlings to Doncaster doesn't necessarily represent a huge policy shift for Newsells Park Stud; it's more a case of matching yearlings to the sales that were deemed the best fit for the individual.

“We've always sent horses to Goffs UK and I know some people would look at our brand and the type of horse we historically produce, which is more a 3-year-old Classic type, and say, 'Well, do we really suit Doncaster?' And there have been times when we have struggled to produce what I call a 'Donny' draft of horses, but equally we have topped the sale in the past and I think this year we really have a group of horses that fit.”

The Premier Sale has undergone a slight image change in recent years. Once the self-proclaimed source of early 2-year-olds with Royal Ascot aspirations, it has now evolved, thanks to a year-on-year increase in the quality of horse on offer, to a source of both early types and those that will improve with time and distance. Advertise (GB) (Showcasing {GB}) and Laurens (Fr) (Siyouni {Fr}) offer perfect examples of what the auction has become: a top class 2-year-old and a Classic 3-year-old from the last two editions.

It is not hard to understand why Dollar is so enthusiastic about his draft this year. When you review the pedigrees of the 'Newsells Nine,' they are all active and performing to a high level and either by proven, high-class stallions or exciting newcomers with the right credentials. Dollar is in for an nerve-wracking 20 minutes on Tuesday morning as a third of his draft will enter the ring in succession, kicked off by lot 19, a Kodiac (GB) colt out of Lady Darshaan (Ire) (High Chaparral {Ire}) who was Group 1-placed and has been represented by the stakes winner Let's Go (Street Cry {Ire}) as her only runner to date.

“The Kodiac is a real 2-year-old type but he has the added benefit of having a proper pedigree, the mare being both high class on the track and proving a quality producer,” says Dollar.

Next up is a Gleneagles (Ire) colt (lot 20) out of another 'Lady,' this time Lady Eclair (Ire) (Danehill Dancer {Ire}), who achieved full black-type when winning a listed race in Chester among her seven wins in total. Her prowess as a broodmare has already been highlighted by her very promising 3-year-old son Al Malhouf (GB) (Dutch Art {GB}), a stakes winner in France this summer. The colt has a pedigree replete with stakes winners and comes with a glowing reference from Dollar and his team.

“This Gleneagles colt, and Gerry [Meehan], our yearling manager, would agree, is the nicest colt we've got this year full stop,” he says. “Conformation-wise he is gorgeous and I've been prepping yearlings with Gerry for 13 years and he is one of the nicest we've had throughout that time. He could have walked into Book 1 [at Tattersalls], he has a proper page and his half-brother was only touched off in a Group 2 in France and is very highly thought of.”

With such an endorsement, Dollar had his choice of sales grounds with this colt and adds, “Admittedly we are taking a bit of a gamble taking him there but we are confident the team at Goffs UK will do their usual good job and have a strong international buying-bench present. Henry [Beeby] and his team really wanted him, they made quite a play for him. He is a lovely horse by an exciting young stallion and I have a lot of belief in him.”

Following him into the ring is lot 21, a colt by Muhaarar (GB) who, like Gleneagles, is a stallion whose first yearlings are generating a real buzz in the sales ring. This colt is out of the stakes-placed Lady Francesca (GB) (Montjeu {Ire}), who has already bred the 90-rated Bartholomeu Dias (GB) (Mount Nelson {GB}) from two runners so far.

“He's just a lovely, lovely horse,” Dollar says. “The family has produced some smart 2-year-olds. Purr Along (GB) was a highly-rated juvenile and we have some Muhaarars for later in the season so I thought this lad was an early type so we would bring him here. It will be a stressful 20 minutes for me but I know they are nice horses and I will be very disappointed if they go into the ring and there aren't a few people following each one in.”

The rest of the Newsells yearlings are nicely spaced out in the catalogue and another of the draft that received a valuable update since catalogue publication is lot 104. The Showcasing (GB) colt's half-brother Chief Ironside (GB) (Lawman {Fr}) was third in the G3 Bonhams Thoroughbred S. at Goodwood earlier this month. “This colt belongs to Robert Barnett who was kind enough to entrust us with his valuable stock the end of last year. I hope he sells well as I persuaded Mr Barnett to send him here. It's a pity the update didn't get into the catalogue but I'm sure enough people will know about it. Chief Ironside is a horse on the up and this is a nice colt with a top-class page so he should be popular.”

Newsells Park also bring three fillies to the sale, each by popular, successful stallions in Dutch Art (GB), Dark Angel (Ire) and Kodiac (GB). “The Dutch Art filly, (lot 71), she looks like she could run next April, she is so precocious and well-made and she is a lovely mover. Any trainer looking for one to get on with quickly, she definitely looks that type,” Dollar says.

“The Kodiac filly (lot 303) we have on the second day, she is a real powerhouse and she walks for fun. We haven't been using Kodiac for all that long but I can see why breeders like using him and why he gets so many good 2-year-olds. They really are like peas in a pod, we have a few on the farm this year and they're all just so similar; nice models, very well balanced, good walkers and this filly is typical of that. The Dark Angel filly (lot 44) looks precocious, she has a nice pedigree and she will interest people.”

Newsells Park will also offer the penultimate yearling in the Premier Sale, and lot 500 is by Oasis Dream (GB), a sire that is enjoying quite a resurgence this year. “The Oasis Dream colt is a real Doncaster horse; he's a neat, well put together horse with a proper page. He's the first foal out of a fast mare who won the Wokingham S. so he should be popular. It's great to see Oasis Dream having such a successful season as well, people were far too quick to write him off,” Dollar offers.

Dollar is keen to point out that the evolution of the Goffs UK sale is something the sales company cannot achieve by itself and that breeders and consignors must also play a role in, broadening the scope of horses on offer at the sale. While this involves an element of risk for those selling, he is confident that the quality of yearling he is bringing to the market will outweigh any shortfall in perception.

“They're just a lovely bunch of horses that are pretty hard to fault. Hopefully other people will agree with us and they will sell well, go to good homes and get a good chance–that's the best we can hope for,” he concludes.