Chandler Made Sure Daddy's Legacy Endured 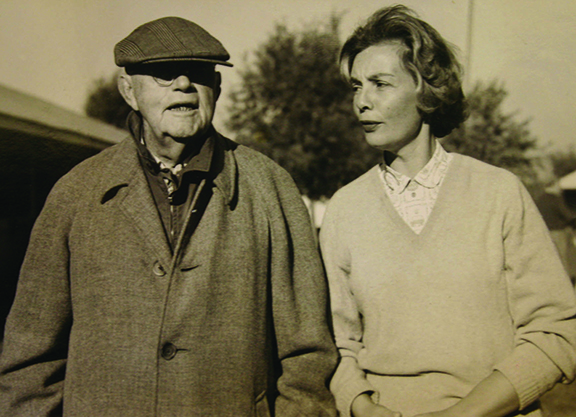 As the librarians at Keeneland were making plans to move items from the old facility in the general offices to a new, larger building, they realized how many duplicates they had of many books, periodicals, papers, catalogs, etc.

Working at The Blood-Horse at the time, I received a call inquiring if the publication would be interested in any items. As the library there was bursting at the seams, the short answer was no.

But … I would come take a look.

Searching through boxes, I found a set of old, old stud books and decided to take them. Surely I could find a place somewhere.

That somewhere ended up being in my office.

Six months later, I had cause to look up something in one of those books. Sitting down with worn leather bindings in my hands, I noticed writing inside the front cover. There in cursive was the name Hal Price Headley.

I phoned his daughter, Alice Chandler, at her Mill Ridge Farm, and we had a wonderful conversation–one of many over the years–about the books.

Hal Price Headley was a co-founder and former president of Keeneland and we figured they were in his office and later boxed up and put in the library, as were many of his archives.

I could feel Alice's warm smile through the phone lines as we chatted.

I offered to bring the books to her, but in typical Alice fashion, she insisted that I keep them. She said her Daddy–she always called him that–would be happy with them on my shelves.

Years later, the day I learned The Blood-Horse was moving from its longtime home on Alexandria Drive to Beaumont Centre Circle, the first person I phoned with the news was Alice.

It was fun telling her that her Daddy's books were coming home, so to speak. Beaumont Centre is named for Hal Price Headley's Beaumont Farm, which once encompassed 4,000 acres of land outside Lexington.

Alice, who died this week at 95, took part of the old family land and developed Mill Ridge, now overseen by her children and grandchildren.

Alice Chandler was a pioneer in the Thoroughbred industry, as has been beautifully recounted in recent days. Sure, she and I often discussed racing, breeding, sales, industry topics, etc., but most often we loved to chat about the history of the game, the days of Sir Ivor, whom she bred, and when stallions covered maybe 32 mares in a season.

She was a great storyteller. Seems her Daddy taught her well.

And, just as her Daddy was aware of continued industry success by passing along his land to his daughter, she, too, knew the future of her family in the business was secure.

I will miss Alice Chandler, but there is much comfort in that thought.