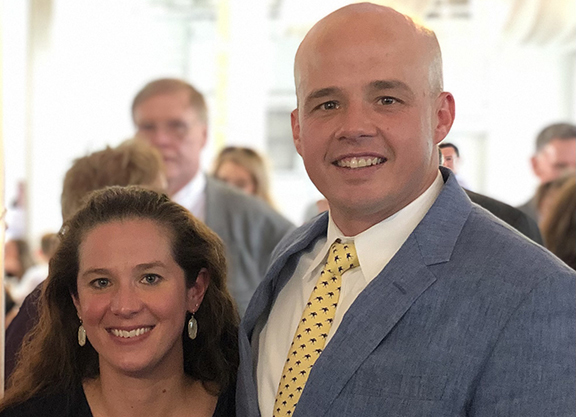 Chance Timm has been named Executive Director of the Don Alberto Corporation, the farm announced Sunday morning. He takes over in that new role March 1.

With over 100 broodmares, Don Alberto, based in Lexington, was a top 15 breeder nationally last year. Timm succeeds Fabricio Buffolo, who has been the Executive Director for the past four years. Both are graduates of the prestigious Godolphin Flying Start program.

Beginning with the purchase of the former Vinery Stud in 2013, Don Alberto has subsequently expanded its holdings in America to occupy 1300 acres and has positioned itself as an active breeder at the top of the bloodstock market.

Originally from Murray, Utah, Chance Timm has over 14 years experience in the Thoroughbred industry. He has been with Lane's End Farm since 2014 as the Director of Stallion
Seasons and Shares, where he has also had an active role in their sales consignment. “Don Alberto has established itself as a major force in the worldwide thoroughbred industry,” said
Timm. “I am confident that our team will further that success in the coming years and am very grateful for the opportunity to be a part of it. I'd like to thank Bill Farish and everyone at
Lane's End; it has been a privilege to work at such a distinguished farm.”

Don Alberto was founded in South America in 1987, when Liliana Solari Falabella bought an estate near Los Angeles, Chile, and founded the Haras Don Alberto, a Thoroughbred breeding farm. With her sons Andrea and Carlos Heller, Falabella developed the farm as well as their Bethia brand, which includes a dairy, winery, milk transportation and trucking, and more. The company employs more than 4,500 people.

Buffolo, originally from Brazil will return to his home country to be closer to his family while continuing his career in the thoroughbred industry. “I look forward to Chance leading our progression as one of the top breeding and racing organizations in North America. Although I am sad to see Fabricio go, I am very thankful for his hard work which has led us to where we are today,” said Carlos Heller on behalf of the Heller Solari family.

“I want to personally thank Carlos and Ms. Liliana for this incredible opportunity and for understanding my desire to be closer to my family. I'm very proud of what we've accomplished and have no doubt Don Alberto will continue to ascend the ranks of the industry,” said Buffolo.

In addition to racing two-time Champion Unique Bella among other graded stakes winners, Don Alberto has bred and sold multiple million-dollar yearlings. In 2018, they bought Grade I winner Salty for $3,000,000 at the Fasig-Tipton November Sale, who produced a Tapit filly in 2020.. She was bred back to Tapit last year. They bought Dacita for $1.85 million the prior year at Fasig November, who has since produced an Uncle Mo colt in 2019, and a Quality Road filly in 2020.