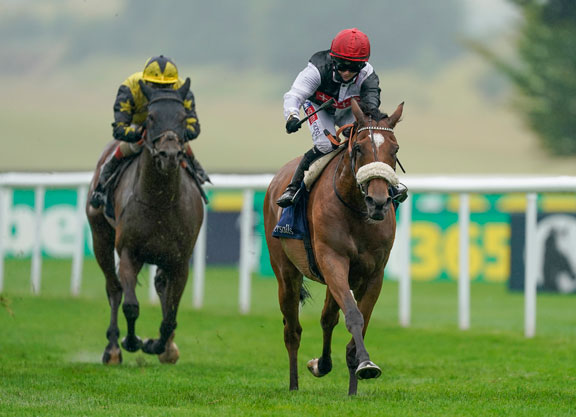 Few senior jockeys in the weighing room would have dared to make the move that Hollie Doyle did on Dame Malliot (GB) (Champs Elysees {GB}) after just five furlongs in Thursday's G2 Princess of Wales's Tattersalls S., but the burgeoning talent knew best and her enterprise paid off handsomely. Taken out of Saturday's G2 Lancashire Oaks due to soft ground, last year's G2 Prix de Pomone winner was faced with that scenario here as Newmarket's July Festival opener fell under grey skies and rain. Too free for the first half a mile anchored behind the leading trio, the 8-1 shot was allowed to tank to the front facing the long seven-furlong straight run to the finish. As last year's winner Communique (Ire) (Casamento {Ire}) loomed inside the final three furlongs, Anthony Oppenheimer's homebred would have been forgiven for laying down on her seasonal bow but instead began to assert from the furlong pole and had 2 1/4 lengths to spare over that rival at the line. There was another 1 1/2 lengths back to the veteran Desert Encounter (GB) (Halling) in third, with the 9-4 favourite Enbihaar (Ire) (Redoute's Choice {Aus}) only fourth.

Doyle had partnered the winner to her emphatic five-length success in the Listed Aphrodite Fillies' S. over this course and distance in July, a performance characterised by her ability to switch off in rear. “When I won on her here last year, I managed to settle her and she came home nicely but today she was very fresh as they didn't go overly-quick early and she wouldn't settle,” her rider commented. “I had a big decision to make then, do I hold her up and run the risk that she would pull too hard and not get home or do I leave her alone and make use of her stride? I pulled her away from the others and she pricked her ears and settled beautifully, so thankfully it worked out. I just had to use my initiative and she didn't end up racing too soon like the others, so I had a bit more left in the tank. The ground was a bit of a worry, she had got away with it when she was the best horse at Deauville last year, but this was a tough contest. It's an amazing feeling to get that group winner under my belt. I've had my Royal Ascot winner, so that box was ticked and this is another one. I'd like to think she could pick up a group one somewhere and she'll definitely stay further.”

Ed Vaughan had opted to treat Dame Malliot with kid gloves as a 3-year-old, but there had been enough in her Aphrodite display to suggest that connections would have a serious prospect on their hands in 2002. Packed away following her sixth behind Enbihaar in Doncaster's G2 Park Hill S. in September, the bay demonstrated here that she is ready to repay the faith shown to her. “I thought she might have gone too soon, but they weren't going fast enough for her. Five out, I thought she might get caught out on the ground but she kept picking up,” her trainer commented. “She's a good filly who holds the track record here on very fast ground. Frankie [Dettori] won on her in France on heavy ground, but got off and said never to run her on that sort of ground again. We'll probably have to take on Mr Oppenheimer's other filly Star Catcher, but I have got her in a group one in Germany so I'll leave it up to Mr Oppenheimer.”