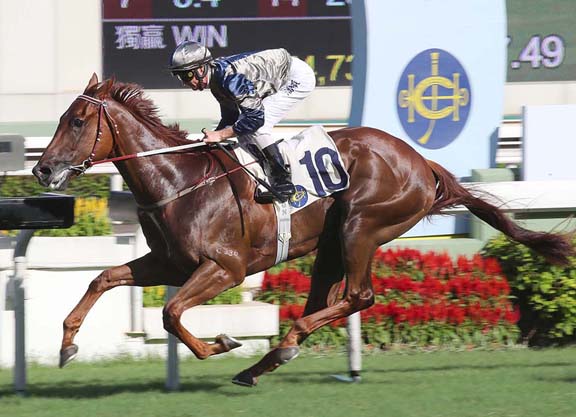 In his final year of training in Hong Kong, the legendary John Moore will saddle two of the three favourites on Sunday's FWD Champions Day program at Sha Tin. Thursday's barrier draw only enhanced the chances of the stable's two-time Horse of the Year Beauty Generation (NZ) (Road to Rock {Aus}) and rising star Aethero (Aus) (Sebring {Aus}), who each drew gate five for the G1 FWD Champions Mile and G1 Chairman's Sprint Prize, respectively.

Beauty Generation became the first horse in Hong Kong racing history to crack the HK$100 million mark in career earnings with a last-out victory in the G2 Chairman's Trophy over the course and distance and Apr. 5 and he will attempt to be the first to win the race three times this weekend. It would be the ninth Champions Mile for Moore and his eighth since 2010.

“Five is perfect–we've got the speed influence on our inside so that will give us the chance to come out and come over, and no doubt camp outside Ka Ying Star (GB) (Cityscape {GB}) unless something foreseen transpires,” Moore told the HKJC's David Morgan. “Everything has gone to plan and it's all systems go.”

By contrast, Moore has won the Chairman's Sprint Prize just three times, his last in 2011. Aethero was precocious enough to start as odds-on in the G1 Longines Hong Kong Sprint in December, but was just bloused out in the final 100 meters by the sidelined Beat the Clock (Aus) (Hinchinbrook) and Hot King Prawn (Aus) (Denman {Aus}). He'll need to break better than he did when last to Voyage Warrior (Aus) (Declaration of War) in the G2 Sprint Cup three weeks back. A recent blowout 'win' in an all-weather barrier trial should have him on his toes, Moore believes.

“I expect him to ping and get to the front. We might see the best of him,” Moore said. “This is a good gate for him, I think. I preferred the middle for him because on the inside, if you break a fraction slowly, you can get knocked down.”

Moore will also be represented in the G1 FWD QE II Cup (2000m) by Eagle Way (Aus) (More Than Ready), who will start one of the rough chances behind Exultant (Ire) (Teofilo {Ire}). The latter, ironically enough, will also jump from barrier five.

The coronavirus crisis leaves this year's Champions Day an exclusively domestic affair, but 16 of the top 20 rated horses in Hong Kong are signed on for Sunday's three Group 1 features.