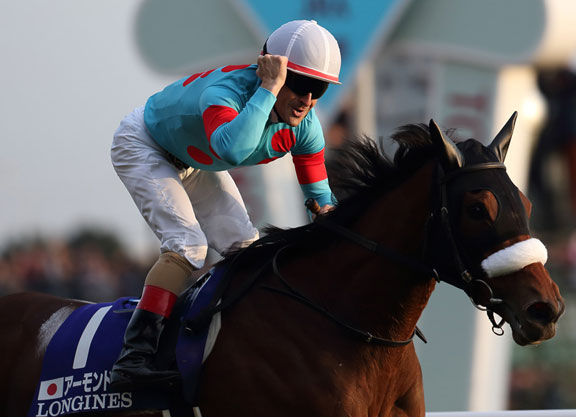 Reigning Japanese Horse of the Year and G1 Japan Cup victrix Almond Eye (Jpn) (Lord Kanaloa {Jpn}) is one of 30 entries from the island nation and could make the QE II her second run of the season, depending on her first-up performance in the G1 Dubai Turf at Meydan Mar. 30. Deirdre (Jpn) (Deep Impact {Jpn}), who was a gallant second to Glorious Forever (GB) (Archipenko) in last year's G1 Longines Hong Kong Cup over the QE II course and distance, could make the return trip to Sha Tin, while Lys Gracieux (Jpn) (Heart's Cry {Ire}), narrowly second to Exultant (Ire) (Teofilo {Ire}) in the G1 Longines Hong Kong Vase in December, could drop back to the 2000m for a potentially mouth-watering rematch.

With at least a temporary easing of travel restrictions to Hong Kong by the Australian government, some 15 nominations were received from the country. Leading 3-year-old colt The Autumn Sun (Aus) (Redoute's Choice {Aus}), favoured for Saturday's G1 Rosehill Guineas (2000m), was handed entries for both the QE II and the Champions Mile, while champion Irish trainer Aidan O'Brien has engaged Magic Wand (Ire) (Galileo {Ire}), runner-up in the GI Pegasus World Cup Turf in Florida Jan. 26. The home team is represented by defending champion and 'TDN Rising Star' Pakistan Star (Ger) (Shamardal), 2016 Hong Kong Cup hero Time Warp (GB) (Archipenko) and Furore (NZ) (Pierro {Aus}) and Waikuku (Ire) (Harbour Watch {Ire}), the 1-2 finishers from the BMW Hong Kong Derby Mar. 17. Furore was also entered for the Champions Mile by trainer Frankie Lor, while his stablemate Dark Dream (Aus) (All American {Aus}) was also given entries for both the QE II and the Champions Mile.

Hong Kong horses are extremely difficult to beat on home turf in the Chairman's Sprint Prize, which has attracted its 2017 & 2018 runner-up Mr Stunning (Aus) (Exceed and Excel {Aus}) in addition to G1 winner Beat The Clock (Aus) (Hinchinbrook {Aus}) and Wishful Thinker (Aus) (I Am Invincible {Aus}), who will get tested for class in the G1 Al Quoz Sprint on Saturday week. The US-based Imperial Hint (Imperialism), a dual Grade I-winning sprinter on dirt and headed for the G1 Dubai Golden Shaheen, is also among the nominees, as are the Al Quoz-bound Viddora (Aus) (I Am Invincible {Aus}), the Richard Fahey-trained G1 British Champions Sprint winner Sands of Mali (Fr) (Panis), Ballydoyle's Lost Treasure (Ire) (War Front) and a rare South American entry in the form of Holy Legal (Brz) (Holy Roman Emperor {Ire}), the champion sprinter of 2018 in Uruguay.

“FWD Champions Day is one of the world's elite race days and the high quality of nominations this year is indicative of that,” said Andrew Harding, Executive Director, Racing, for the Hong Kong Jockey Club. “Last year was the first time that we positioned all three of our spring majors on the same day and the result was a tremendous celebration of world class sport. The broad worldwide spread of entries is an exciting feature of this year's nominations, with an impressive Japanese contingent and a very welcome and strong group of entries from Australia.”