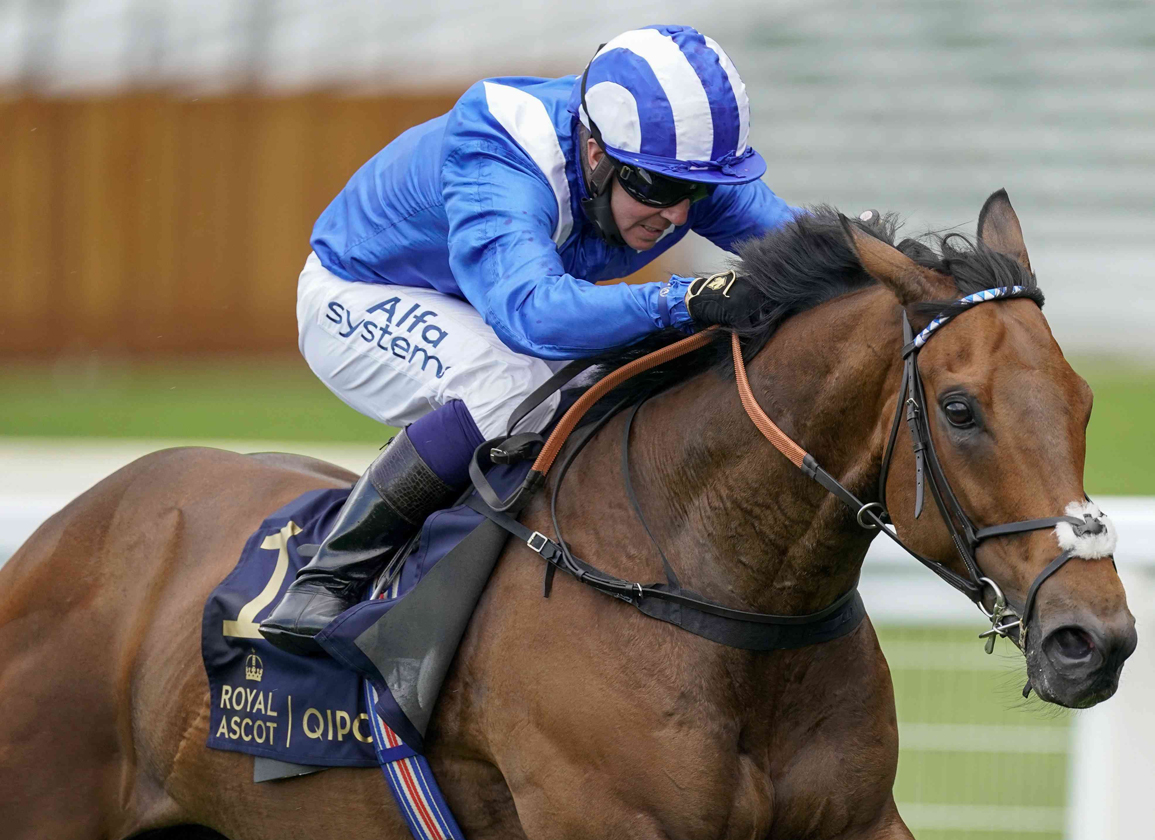 Champion sprinter and four-time Group 1 winner Battaash (Ire) (Dark Angel {Ire}–Anna Law {Ire}, by Lawman {Fr}), has been retired from racing, connections announced on Saturday. The 7-year-old gelding raced in the Shadwell colours for the late Sheikh Hamdan and in 2021, his daughter, Sheikha Hissa. His final start was a seventh-place run aiming for a fifth-straight win in the G2 King George Qatar S. at Goodwood on Friday.

“Sheikha Hissa confirmed to me how much Battaash had meant to Sheikh Hamdan and indeed to all her family and she does not want to abuse him in any way–while the ground may have been a contributory factor to his defeat yesterday it appeared that some of his old spark was missing, so ultimately the decision to retire him was an easy one.”

Bred by Ballyphilip Stud in Ireland, the bay was a 200,000gns yearling purchase out of the 2015 Tattersalls October Sale Book 2 and sent to the yard of Charlie Hills where he would stay for the entirety of his 25-start career. He was a four-length debut winner at Bath in May of 2016 and ended his five-start juvenile season with a third in the G3 Cornwallis S. at Newmarket. As a sophomore, Battaash won four of his five starts-a listed race at Sandown, the G3 Coral Charge Sprint S., the first of four G2 King George Qatar S. titles and the G1 Prix de l'Abbaye. His only loss was in the G1 Nunthorpe S. and he was named the French highweighted sprinter at three.

Successful in the G2 Temple S. resuming at four, the gelding was runner-up in the G1 King's Stand S., and claimed his second King George later that summer. At the end of the year, Battaash was named the champion sprinter in England from five to seven furlongs, an achievement he would also earn in 2019/2020.

Another Temple S. went his way in 2019, and he finished runner-up again in the King's Stand S. at Royal Ascot. After winning the King George, he triumphed in the Nunthorpe S. for the first time at York that August. Battaash's 6-year-old season was kept to just three starts, but he won them all-a King's Stand victory on his third try, his fourth King George and his second Nunthorpe to bring his Group 1 tally to four. Injury marked the winter of 2020/21, and Battaash got a late start with a fourth in the King's Stand, prior to his career finale at Goodwood on Friday.

Gold continued, “Battaash has been a flag-bearer for Shadwell for the last six years and has run in 19 consecutive group races, winning 11 of them, including four Group 1s and was still at his prime as a 6-year-old last year winning all three of his starts.

“Despite having had soundness issues most of his life, from poor X-rays of his knees as a 3-year-old right through to having to repair a tiny fracture in his right-fore fetlock joint in December last year, along with two different surgeries for wind abnormalities, he has raced at the top level for the last five seasons.

“As a result of overcoming all these adversities he has obviously become a huge favourite for everyone connected with Shadwell and on behalf of Sheikha Hissa and her family I would like to pay tribute to all those who have contributed to his success–obviously to Charles Hills and all his team who looked after the horse so brilliantly, particularly Bob Grace and Bluey Cannon who took over the mantle of looking after the horse this year when Bob [Battaash's former groom] retired.

“To all those who rode the horse over the years, and in particular Dane O'Neill who has ridden him in so much of his work for the last three or four years. To all the vets who have spent so much of their time making sure that the horse is in top shape and finally to Dennis O'Brien and all his team at Shadwell Stud where the horse has spent his winters for the last four years–without all their dedication and hard work he would never have achieved the heights he has and we are very grateful to everybody who has contributed to his success.

“It has been an enormous thrill to have a horse as explosive as Battaash and together with other recent stars of the turf like Stradivarius (Ire) (Sea The Stars {Ire}) and Enable (GB) (Nathaniel {Ire}), he has lit up the last few years and given us some wonderful days on the track, and we all feel very honoured to have been associated with him.

“Battaash will live out his days in well earned retirement at Shadwell Stud.”

The first foal out of his dam herself a half-sister to G2 Champagne S. winner Etlaala (GB) (Selkirk), Battaash has a 3-year-old full-sister named Altaayshah (Ire) (Dark Angel {Ire})-an 800,000gns yearling purchase by Shadwell in 2019–and a yearling full-brother. This is also the family of Shadwell's G2 Duke Of York S. hero and young stallion Tasleet (GB) (Showcasing {GB}), who placed twice at the highest level.

Paying tribute to his stable star, Hills tweeted Saturday morning, “Thank you Battaash for all the memories-a horse of a lifetime. Also, a huge thank you to all those who worked closely with him throughout his career-it's certainly been a journey and we couldn't have done it without you.”

Added Shadwell jockey Jim Crowley, “He's been an unbelievable horse for everyone involved and Charlie Hills has done a fantastic job with him. Bob Grace deserves a special mention for looking after him until his retirement and his new lad Bluey [Cannon], too.

“He's been the horse of a lifetime and I'll miss him dearly. To get a buzz like you got off him is very difficult to find. He was so fast–too fast for his own good sometimes, but it was always exciting riding him.”