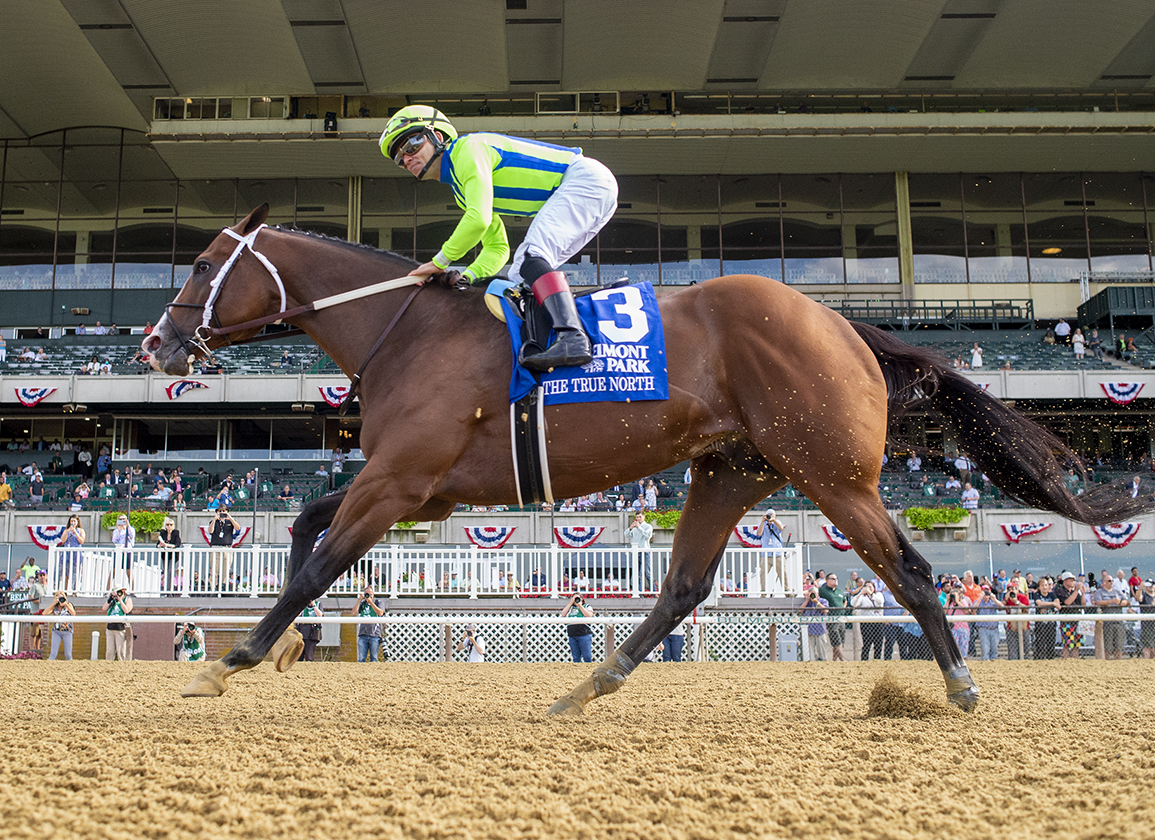 Fleet-footed champion Jackie's Warrior (Maclean's Music) was fittingly hammered down to 1-5 favoritism against an overmatched field in Belmont's GII True North S. Friday and he more than ran to that backing with a dominant victory.

Hustling up to take his preferred position at the head of affairs, Jackie's Warrior was confronted by 12-1 shot Mr Phil (Mr Speaker), but he easily shook that foe off as the opening quarter went up in :22.83. Loping along on a loose rein under Joel Rosario, the bay clocked a half-mile in :45.52. Two wide turning for home, Jackie's Warrior was still on cruise control in the lane, sailing home to a facile five-length victory. Sound Money (Flatter) was best of the rest in second.

“It took a little time to get him going, but he was just doing his thing after that,” Rosario said. “He's a special horse. I just sat and let him do his thing and he's unbelievable. He means everything. So many great memories. He's very smart and fast and he's on my list as one of the top horses [I've ridden]. I looked back and was so far in front and decided to save some for the next one. You can see I never showed the stick. He did it all on his own.”

“It's as simple as he's very fast,” said trainer Steve Asmussen. “It's a race and he's a very fast horse that has a tremendous amount of poise and confidence about himself. How he's handling races and all three of his runs this year, he's eased up late [with] good separation from them.”

As for what's next, the Hall of Famer said, “We're very excited to be able to go to Saratoga with him with the success there. I expect to run him in the [GI] Vanderbilt [July 30], the [GI] Forego [Aug. 27] and the Breeders' Cup [Sprint].”

A two-time Grade I winner in New York at two, Jackie's Warrior captured the GII Pat Day Mile last year and missed by just a neck in the GI Woody Stephens S. on this weekend in 2021. Rebounding with a 7 1/4-length tour de force in Saratoga's GII Amsterdam S., he won a knock-down, drag out battle with MGISW Life is Good (Into Mischief) in that venue's GI H. Allen Jerkens Memorial S. four weeks later. The chestnut ran a career-best Beyer Speed Figure of 110 when romping in the GII Gallant Bob S. at Parx in September, but faded to sixth as the heavy favorite in the GI Breeders' Cup Sprint S. at Del Mar Nov. 6. Jackie's Warrior is two-for-two so far this year with effortless scores in the GIII Count Fleet Sprint H. at Oaklawn Apr. 16 and the GI Churchill Downs S. May 7.

Pedigree Notes:
A future Spendthrift stallion, Jackie's Warrior is one of four Grade I winners for Maclean's Music. His dam Unicorn Girl summoned $850,000 from bloodstock agent Arthur Hoyeau at the 2020 Keeneland November Sale. Her then-weanling colt by American Pharoah preceded her into the ring, bringing $600,000 from Coolmore's M.V. Magnier. She failed to get in foal to Into Mischief for 2021, but had a filly by that super sire Mar. 18 of this year. She also has a 3-year-old daughter named Lenni Girl (Candy Ride {Arg}), who has been retained by her breeders.