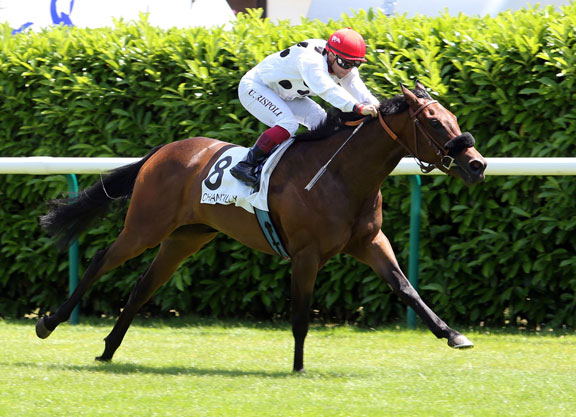 Umberto Rispoli, a two-time champion jockey in Italy who has been riding in Hong Kong in recent years, is headed to California. Ron Anderson, who will be Rispoli's agent, said the 31-year-old rider will arrive in California Dec. 16 and accept his first mounts there on opening day, Dec. 26.

“He was touted to me by Frankie Dettori,” Anderson said. “He said the kid wanted to come to the US and asked if I would be his agent. He is a two-time champion in Italy, has an American style and has an unbelievable work ethic. He's ridden all over the world. He's a world-class rider, has no bad habits and is a real professional. I'm excited to go to work for him.”

Rispoli is the not the first European rider to winter in the U.S., but most have returned overseas when the flat season gets underway there. Anderson said that won't be the case with Rispoli come the spring.

“He is staying,” Anderson said. “He's in the States for good.”

Rispoli's best year was 2009. With 245 victories, he broke the record for most wins by a jockey in a single year in Italy and won his first riding title there. He eventually left Italy and began riding in France, while also working in Hong Kong. He has had 122 winners in Hong Kong, but has had just five winners from 100 rides during the current racing season in that country.

“The Hong Kong situation has not been great,” Anderson said. “Hong Kong is very claustrophobic. He's not under contract to anyone and is a 'club rider.' They're very finicky there. He's just looking for a change and he's good. We'll team up with him and see where it goes.”

Anderson is also the agent for Joel Rosario, who will also be heading to California soon after another successful year riding in New York and Kentucky. That means that Anderson will not be in California year-round. The agent said he has not talked to Rispoli about his plans beyond the winter months.

“We'll cross the bridge when the time comes,” Anderson said. “I hope I can bring him back east with me when I come back with Joel.”

Anderson added that he believes the California jockey ranks are thin right now and that a new face like Rispoli should have a good chance of catching on.

“I'm anticipating him being really good because you can't be a champion rider in Italy unless you're very good,” he said. “He's got an American style so he's not going to have a bunch of people looking at him and saying that he looks like he's going to fall off the horse, which is the way some European-style riders look. He checks all the boxes. I have a lot of confidence in myself, so I think he'll be on the right stock. Even with the smaller fields, there are plenty of opportunities in California at this point. It's not like yesteryear when we had a bunch of champions out there. There is not a lot of depth.”

Rispoli's last day of riding in Hong Kong will be Sunday at Sha Tin.

The globe-trotting jockey has never had a mount in the U.S., but has ridden in Canada, Italy, Hong Kong, France, Switzerland, Germany, England, South Africa, Australia, Turkey, Japan, Dubai, The Czech Republic, Singapore and Macau. He has won Group 1 races in Italy, Hong Kong, Japan and France.