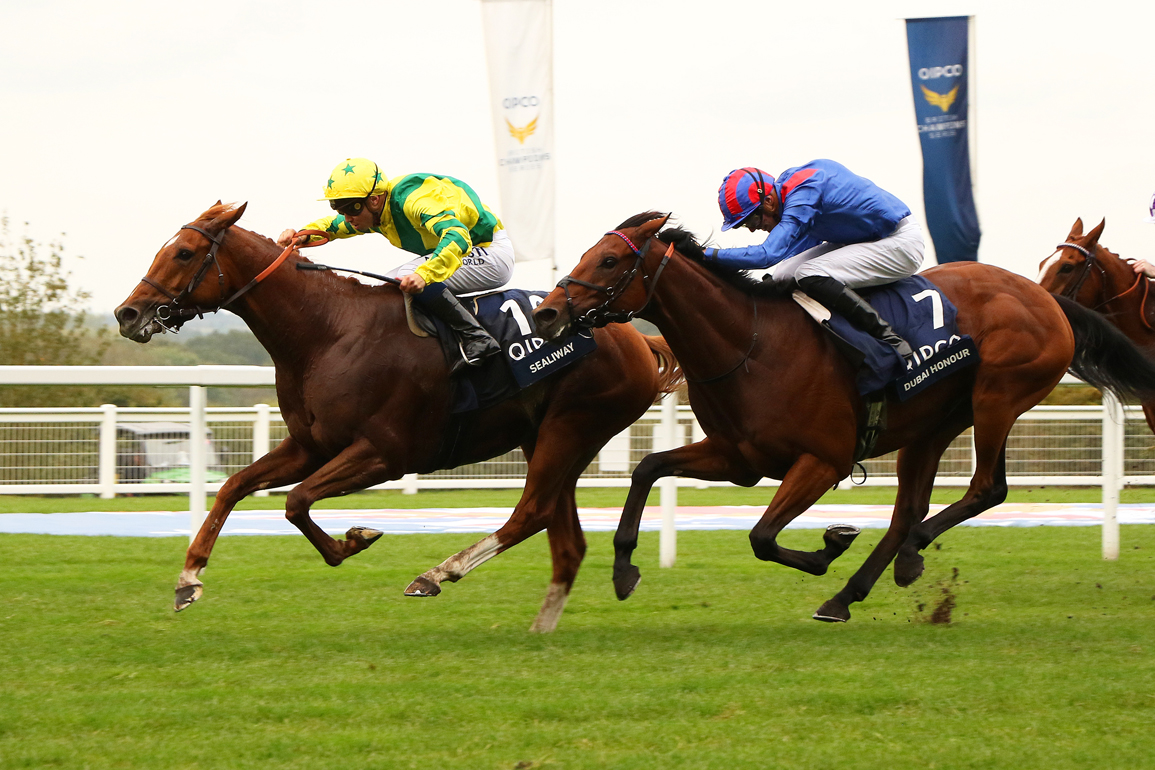 After a few days where moving the date of the G1 Prix de l'Arc de Triomphe had been mooted and widely-discussed, Haras de la Gousserie's Sealiway (Fr) (Galiway {GB}) proved that the 13-day turnaround from the ParisLongchamp monument to Ascot's G1 QIPCO Champion S. holds no fears with a career-defining success in Saturday's feature. While most of the focus had been on how Adayar (Ire) (Frankel {GB}) would deal with being backed up from ParisLongchamp, it was the bargain €62,000 Arqana Deauville August graduate Sealiway who bounced back from a fifth placing there to scoop this prestigious prize after a tussle with Dubai Honour (Ire) (Pride of Dubai {Aus}). Travelling with enthusiasm in fourth early in the hands of Mickael Barzalona, last year's impressive G1 Prix Jean-Luc Lagardere hero got to Adayar and to the front two out and battled hard to see off the supplemented Dubai Honour and prevail by 3/4 of a length. There was another 1 1/2 lengths back to Mac Swiney (Ire) (New Approach {Ire}) in third, with the 13-8 favourite Mishriff (Ire) (Make Believe {GB}) a length away in fourth. “It's great to be back in the big time,” Barzalona said of the Cedric Rossi-trained 12-1 shot. “I've been with him since the beginning and he deserved that. The team said he had improved a lot since the Arc run, so although it was a tough race they were pretty confident. He showed plenty of stamina in the Arc, but today he showed plenty of speed and is just an excellent horse.”

Out early as a juvenile last term, Sealiway had won over six furlongs on debut at Saint-Cloud in May and at Chantilly in June before finishing third in the Listed Prix Roland de Chambure over seven at ParisLongchamp in July. Taking Vichy 's Listed Prix des Jouvenceaux et des Jouvencelles by five lengths the following month, the chestnut had run second in the G3 Prix la Rochette back at ParisLongchamp in September prior to his eight-length romp in the Lagardere on Arc day. Fifth after meeting some trouble in the GI Breeders' Cup Juvenile Turf at Keeneland in November, he returned to be second in the Apr. 18 G3 Prix de Fontainebleau and eighth in the May 16 G1 Poule d'Essai des Poulains over a mile at ParisLongchamp before moving up in trip.

No match for the Poulains hero St Mark's Basilica (Fr) (Siyouni {Fr}) when second in the 10 1/2-furlong G1 Prix du Jockey Club at Chantilly June 6, he was reappearing for the first time when finishing off strongly late under Franck Blondel to finish 3/4 of a length behind the fourth-placed Adayar at 58-1 in the Arc. Entitled to come on for that first effort off a lengthy break, he was fresh and keen throughout the early stages as last year's winner Addeybb (Ire) (Pivotal {GB}) and Adayar made it honest in front. As he had two Sundays ago, Adayar looked turning for home as if he might be stretching the field, but his finish was not as dynamic as it had been here in July nor at Epsom before that and as Sealiway loomed at his side the game was up. Mishriff tried hard to get on terms with the French challenger before fading, while Mac Swiney had his run interrupted by Dubai Honour and had to switch inside. Sealiway's sole danger late was another who took part in Arc weekend, but the impressive G2 Prix Dollar winner Dubai Honour was never quite able to find that extra surge to get past as the 3-year-olds took command.

William Haggas said of the runner-up, “Dubai Honour was a little bit unfortunate, because he's a hold up horse drawn in stall 10. Adayar missed the break and just as James [Doyle] was trying to get him in, Adayar went hurtling past him and set him alight a bit. No excuse, we were quite far back but that's the way he needs to be ridden. He came with what looked like a winning run, but the other horse outstayed him. He's another that has made great progress. I was thinking that the Hong Kong Cup might suit him. He would enjoy that long straight and seems to run well right-handed. I don't know about Australia for him yet.”

Charlie Appleby said of Adayar, who ended up fifth, “Will said it was the ground. He was always just doing too much really and it paid up the straight. Will just said his exertions paid towards the end. At the end of the day, we made the decision to come here and maybe it was a tougher race than we thought in the Arc. We'll put him away for the winter and we've got a nice horse for next year. We know we can step him back up to 12 furlongs too. We know how to set our stall out next year. Today there was not going to be any natural pace and he was just over-racing and it paid towards the end.” Mishriff's rider David Egan said of the beaten favourite, “He is a better horse on better ground.”

Sealiway is out of the Listed Prix Herod winner Kensea (Fr) (Kendargent {Fr}), whose full-brother to the winner Seagali (Fr) sold to the MAB Agency for €115,000 at last year's Arqana Deauville September Yearling Sale and whose Seagala (Fr) also by Galiway was a €380,000 purchase by SARL Trotting Bloodstock at the recent Arqana Deauville August Yearling Sale. This is the family of the listed-placed Exit To Nowhere pair of Enjoleur (Fr) and Epicurien (Fr), the G2 Prix Malleret scorer Another Dancer (Groom Dancer) and the G3 Park Express S. winner Pollen (Ire) (Orpen).