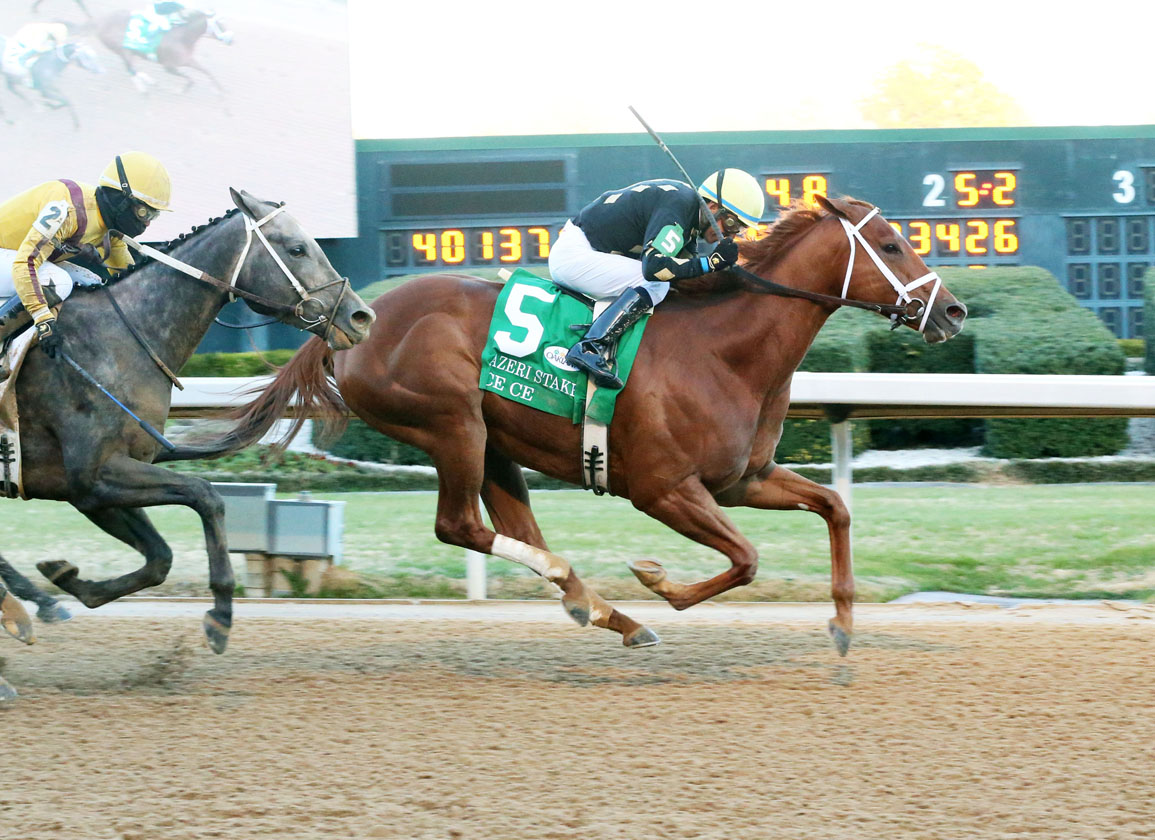 Ce Ce (Elusive Quality), game winner of the 2020 GI Apple Blossom H., underscored her affinity for Oaklawn with another game victory in Saturday's GII Azeri S. The 2021 champion female sprinter was squeezed slightly at the start by the wayward Lady Mystify (Bernardini), while Pauline's Pearl (Tapit) took the worst of it and was forced back sharply as defending Azeri champ and race favorite Shedaresthedevil (Daredevil) raced out to take control. Showing the way through an opening quarter in :23.44 followed by a :47.53 half, the leader continued to move easily as Ce Ce's regular pilot, Victor Espinoza, was content to survey the action in two-wide fourth. Starting to pick up the tempo rounding the far turn, Ce Ce reeled in the even-money choice, collaring her rival turning at the quarter pole and began inching ahead of the game GI Kentucky Oaks heroine in early stretch. Appearing to be home free, Ce Ce faced another challenger late, however, as Pauline's Pearl, who overcame her early disadvantage, put in a good run, but couldn't quite get by late as Ce Ce prevailed by a hard-fought 3/4 of a length. Shedaresthedevil crossed the wire a clear third.

“I had a good trip actually,” Espinoza said. “I was able to get clear at the break so I could sit behind the frontrunners. I wanted to wait a little longer, but she was doing it so easy, I just moved on with her. She could hear all the noise from the crowd and kind of put the brakes on me, but luckily the other two horses [Pauline's Pearl and Shedaresthedevil] were on either side of me and when she saw them, she moved forward. It's like she runs so easy, she gets a little bit bored and does some silly things, but it all worked out.”

Added Michael McCarthy, speaking via Bas Nicholl (assistant to D. Wayne Lukas), who saddled the mare, “Obviously, coming to the top of the stretch, it looked like she was going to go ahead and put a little daylight between herself and everybody else. Coming to the sixteenth pole, I saw her ears go up and wasn't sure if she was getting tired or what. When those two other fillies came to her, she dug back in and showed what a champion she is today.”

CeCe, winner of Oaklawn's 2020 GI Apple Blossom H., annexed four of six starts during her championship season, including Gulfstream's seven-panel GII Princess Rooney S. and 6 1/2-furlong GIII Chillingworth S. at Santa Anita. She capped off the year, while securing her championship title, with a score in the GI Breeders' Cup Filly and Mare Sprint at Del Mar. The Bo Hirsch homebred kicked off 2022 with a runner-up finish as the favorite in the GII Santa Monica S. at Santa Anita Feb. 5.

Magical Maiden, Ce Ce's Second dam, was a $26,000 juvenile purchase by Hirsch's father Clement. She took a pair of Grade I races in Southern California, earning over $900,000 before being sold for $400,000 at the 2000 Keeneland November sale. The Azeri winner's late sire, Elusive Quality, is responsible for a total of 56 graded winners and 137 stakes winners.