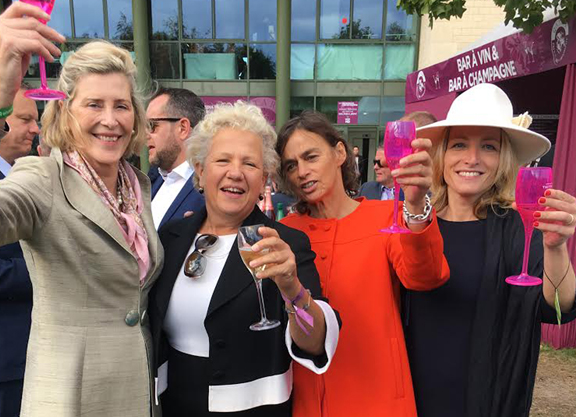 An all-female racing partnership of 40 women based in seven different countries tasted global success with a Group 1 winner in Australia last weekend.

Kentucky-based Anna Seitz, the co-founder and syndicate manager for It's All About the Girls, LLC, told TDN in a Monday phone interview that the win by Global Glamour (Aus) (Star Witness {Aus}) in the A$500,000 G1 Sydney Airport Flight S. at Randwick on Saturday could be partially attributed to the partnership's desire to want to cash in on the lucrative Magic Millions Racing Women initiative that rewards female-owned graduates of that yearling sale if their horses go on to run big in the Magic Millions Race Series.

Seitz also credited streamlined racehorse ownership rules in Australia that she said are generally geared toward making it easier for newcomers to break into the sport via partnerships. She added that she is hopeful some sort of similar bonus scheme and a rethinking of horse syndicate rules here in the United States could someday be incentives that would help invigorate Thoroughbred ownership in America.

But until then, Seitz said, It's All About the Girls members are content to savor their most recent victory by partying in style–the syndicate even has its own champagne and wine sponsors.

A business model based on good times and inclusiveness is the backbone of It's All About the Girls, which Seitz brought to reality in 2013 thanks to a brain spark about “fillies owning fillies.” The syndicate now owns eight distaffers either in training or on farms throughout the world, she said.

“Everybody's always talking about wanting to help racing, and I was sick of sitting around just talking about it,” Seitz said. “So I thought it might be a good idea to start some syndicates more based around fun, education, cheekiness, and not taking ourselves too seriously. Just kind of doing it on the side as a fun way to get new people involved in racehorse ownership.”

Seitz herself is no stranger to Thoroughbreds. She grew up working on her family's Brookdale Farm in Versailles, and after graduating from the University of Notre Dame in 2003, took an office manager job with trainer Todd Pletcher's racing stable. Since 2008 she has worked for Fasig-Tipton Co., where she now manages client development and public relations.

Seitz said that a few years ago she helped to found Hit The Board Stable, a general syndicate of about 20 owners. That group enjoyed success with the $20,000 purchase of I'm Already Sexy (Ready's Image), a MGSW filly who won $762,300 in purses and later sold for $420,000 at Fasig-Tipton November after her racing career was over. But during that same time frame, Seitz decided to narrow her focus to recruiting female horse owners for the then-new It's All About the Girls partnership.

“I realized there were a lot of women who wanted to be a part of racing but were intimidated by the whole process, or they didn't want to buy a whole horse all by themselves,” Seitz said.

“I love buying fillies,” Seitz continued. “I think they have a chance at more residual value [as broodmares], because if they go on to win anything, it ups their value. A lot of times we don't have the ability that these real big syndicates have to buy really well-bred fillies, so if our purchases can win a race it helps us a lot, because at the end our goal is to sell them at public auction. It's hard to breed [as a syndicate] when you have so many people involved.”

Seitz's job at Fasig-Tipton often takes her around the world to promote the sales company at other major global auctions. “And Magic Millions has a bonus where if you buy the horse from their sales company, and run back in their specific races, you can run for major bonuses if you're an all-female syndicate or individual owner,” she said.

It was while riding the bus to the 2015 Magic Millions Gold Coast Yearling Sale, Seitz said, that “I ran into my friend Elaine Lawlor, who works for Goffs, the sales company in Ireland. And we started talking about the bonus and how I have these all-women syndicates, and how there's a bunch of women in Australia and all these other different countries that we both know, and we started thinking together, 'Maybe we should buy a horse.' [The bonus program] encourages women to get into racing, and that's why we really wanted to buy a horse down there.”

Seitz recruited Lawlor into the partnership, and they reached out to bloodstock agent James Bester for help in acquiring the right yearling.

“We got outbid on some really nice fillies and were kind of getting frustrated because we really wanted a horse and the sale was almost over,” Seitz said. “And then James found this little filly by Star Witness, and we got her for A$65,000. It was just one of those things, being in the right place at the right time, and then Elaine and I just started calling [potential syndicate members] all around the world.”

“So we ended up with about 40 owners from seven different countries, and five different sales companies are represented in this one horse,” Seitz said. “It truly is about having a good time. There are no egos involved.”

Seitz said that even though the syndicate members weren't all together for Global Glamour's win on Saturday, they were collectively popping champagne corks in celebration after the filly secured the first Group 1 win for sire Star Witness.

Some It's All About the Girls partners had been at the G1 Qatar Prix de l'Arc de Triomphe in France, others were at Randwick for Global Glamour's race, and Seitz herself was at home on the family farm in Kentucky watching the race at nearly 2 a.m. local time.

“So there were people all over the world cheering for this one filly,” Seitz said. “It was amazing. We weren't expecting to have a Group 1 winner, so we just try to make sure we have a lot of fun along the way.”

According to Lawlor, who manages the Australian day-to-day operations of the syndicate, co-trainers “Gai Waterhouse and Adrian Bott with their outstanding communication have made the syndicate tremendous fun. They have done a terrific job with Global Glamour and full praise to jockey Tim Clarke for a superb ride on Saturday. The filly will travel to Melbourne on Tuesday and will accept for the Caulfield One Thousand Guineas, a Group 1 over 1600 meters next Saturday at Caulfield. The long-term plan is for her to run in the 3YO race at the Magic Millions Gold Coast meeting in January over 1400 meters, which features A$2 million total prize money.”

According to Seitz, in terms of partnerships, “Australia is completely different than America. In the States, you have to set up a limited liability company for each horse. But in Australia, they make it much easier. They kind of encourage people to get into racing down there, but over here it's a little more complicated.”

Seitz continued: “We want to be an entryway for new owners. I don't want to talk negative about it, but it's still difficult with licensing [in the U.S.]. Every state has different rules, and then you have to set up a different LLC for each horse and have a special bank account. It's just very complicated, but we have a pretty good system now that we've done so many of them, and women can just show up and have fun; go see their horse train and race. I hope that the racetracks will try to make it easier. I notice that some of these tracks–Churchill Downs and Canterbury Park–have started racing clubs, so that's wonderful to see them doing all that work for you, and then you can kind of just come and enjoy the benefits.”

“We work with whoever wants to do it,” Seitz said. “We build each budget around how much interest we think we have with each horse, and we try to be inclusive. We don't want to turn any woman away who is interested in getting into racing.”