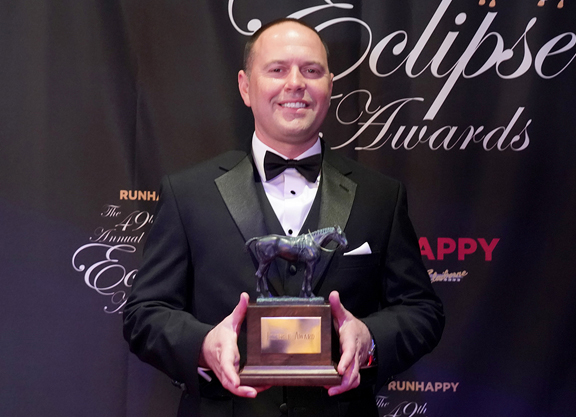 The TDN Writers' Room podcast presented by Keeneland has transitioned to video over the past two weeks as the hosts record the show from home, and this week they welcomed their first video guest, none other than four-time defending Eclipse Award-winning trainer and future Hall of Famer Chad Brown.

In a wide-ranging interview that touched on how the pandemic has affected his horses and family, what he looks for at sales, his feelings on clenbuterol, his thoughts on how to help smaller trainers get a foothold and his memories of Bobby Frankel and Ghostzapper, Brown provided valuable insight across the board as the Green Group Guest of the Week.

“From a business standpoint, first of all, it's been extremely challenging and disappointing,” Brown said of the current shutdown. “I'd imagine all businesses small and large throughout the country are going through the same thing at some capacity. We understand we're not alone, but our business really focuses on the teeth of the season from April to the first week of December … We've really focused on the time of year where now we're entering a shutdown. It's been particularly hard for us. A lot of nice horses ready to run and nowhere to go. Then on the personal front I have two daughters up in Saratoga and I was supposed to be home by now. I hear a lot of stories like that. From friends of mine both in and out of horse racing, I know a lot of families are sort of split apart.”

Asked about his strategy when it comes to buying horses, Brown emphasized his partnership with renowned bloodstock agent Mike Ryan and spoke to his knowledge of horses evolving over time from back in the days when he was working for his late mentor Frankel.

“The sales are tricky. The longer you do this as a trainer I find you find you have so much data built up in your head about what works and what won't work. The longer I do it, you see more and more things horses can live with,” he said. “You see more horses that you passed on for conformation or pedigree that ended up being good horses. I find now when I'm older and wiser I hope, I have a lot more horses that I have a favorable eye to because I know what they can overcome after seeing so many horses do well that I didn't think early on had the potential … Frankel used to tell me, when he was buying a lot of horses privately, they'd come in the barn and I'd say, 'Wow, this one

has no pedigree.' He told me one day, 'They make their own pedigree.' Now I know what he means by that. They might not have pedigree today. Then after they win a Grade I, all their siblings are now have good pedigrees, down the road.”

This racing stoppage is going to hurt smaller trainers more than larger ones, and Brown offered his suggestions from the top of the game as to how some outfits scraping to get by can be helped along to stay in business.

“I think that there's a way where it could possibly be tiered in certain ways to try to help the smaller businesses,” he said. “Maybe the workman's comp, if you get it all under control nationally somehow or even state by state, where it's sort of a co-op, maybe the people that have X amount of horses and above pay a higher rate, and for your first 20 horses maybe you don't pay any. Some of the places that have stall rent. If you're in Saratoga and in the offseason, you have to pay stall rent, or you're over here at Palm Meadows, maybe the first 15 horses, you don't pay anything. We sort of tier it up like a tax bracket where the people that have more, pay more.”

Elsewhere on the show, in the West Point Thoroughbreds news of the week, the writers ran down the latest racing-related effects of the pandemic and speculated on whether virtual horse racing could catch on in America like it has in Europe during this dark period. Click here to watch the podcast on Vimeo, or here to listen to the audio-only version.