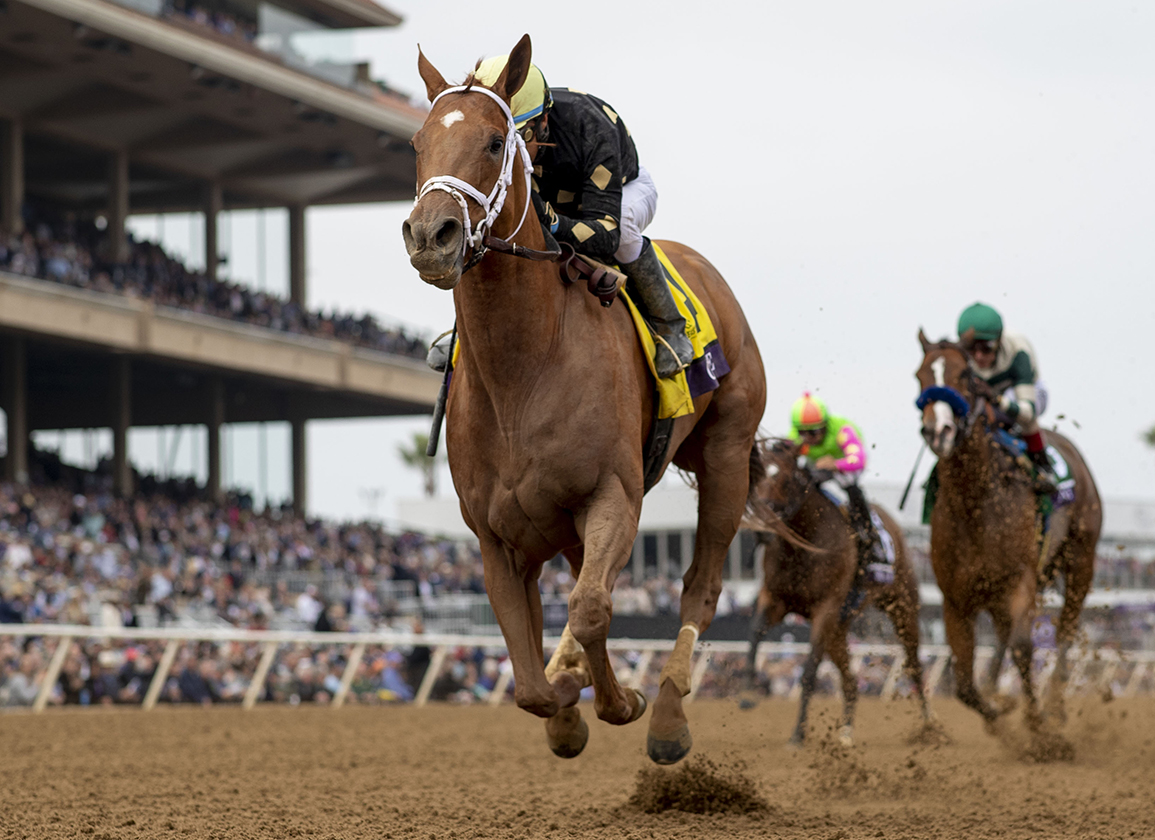 DEL MAR, CA – With all eyes on defending champion and 2-5 favorite Gamine (Into Mischief) and star 3-year-old Bella Sofia (Awesome Patriot), it was Ce Ce (Elusive Quality) who came rolling over the top in the stretch to upend Saturday's GI Breeders' Cup Filly & Mare Sprint at Del Mar.

Last year's Filly & Mare Sprint heroine Gamine, looking to become only the second two-time winner of the race following Groupie Doll (Bowman's Band), went to the front, as expected, and was shadowed by GI Longines Test S. heroine Bella Sofia through an opening quarter in :22.31 and a half mile in :44.92 as the Bo Hirsch homebred sat in a dream spot in fourth in the five-horse affair.

Edgeway (Competitive Edge), winner of the local prep GIII Rancho Bernardo H. this summer, snuck through an opening along the inside on the far turn as three of them lined up with Gamine sandwiched in the middle. Ce Ce, meanwhile, patiently waited in fourth.

Ce Ce ranged up with a menacing, five-wide move beneath Victor Espinoza at the top of the stretch and blew by them all down the lane to win going away as much the best while stopping the timer in a sharp 1:21 flat for seven furlongs. It was 2 1/2 lengths back to Edgeway in second. Gamine stayed on for third.

“When she hit the front today, obviously a little bit reminiscent, it felt like the Preakness, you're certainly happy that they go ahead and show themselves and they're going to run well,” McCarthy said. “Whether they're going to run one, two, three, you don't know, but your job is basically done once they walk on the racetrack. When she hit the sixteenth pole and it looked like no one was coming to her, it was a special feeling.”

It was an emotional victory for Espinoza–his fourth in the Breeders' Cup–who suffered a fracture of the C-3 vertebra in his neck in a tragic morning incident at Del Mar three summers ago when his charge Bobby Abu Dhabi died of an apparent heart attack. Espinoza's last win at the Championships came aboard the brilliant Triple Crown winner American Pharoah in the 2015 GI Breeders' Cup Classic.

“My career's been up and down, but nevertheless, I've been down below and I never gave up,” Espinoza said. “And sometimes you hit the ground, but no matter how hard we hit it, when you stand up, you stand up big. And I feel great right now and like I say, it's really special, because my last Breeders' Cup win was American Pharoah, but in between I had a little bit of rough accident and other stuff. Life is interesting and fun, we don't know what's going to happen in the future, but just keep going day by day.

Espinoza continued, “As long as the body essentially is right, you know, it's what I've done my career and that's all I've done my entire life. I've been mentally prepared for when my body is not physically right, then I would sit back and start all over again. But it's almost like my body helped me to go forward and I got to continue riding and ride great horses like Ce Ce, that helps an awful lot, too.”

Any chance we see her back for a 6-year-old campaign?

McCarthy added, “It's a proud moment for [Bo Hirsch and I]. Such a fantastic day and fantastic event. Just happy for everybody. She's been very consistent. I think last year I decided that this year we would go one turn with her. She's been touting herself this week that she was going to run a big one. I'm just glad she did on a stage like today.”

Ce Ce becomes the third Breeders' Cup winner for the late Elusive Quality, who is also responsible for Raven's Pass (Classic) and Maryfield (F/M Sprint). She is one of 17 Grade I winners/56 graded winners/137 stakes winners for her sire. Ce Ce is one of eight Grade I winners/29 graded winners for Belong to Me as a broodmare sire. Ce Ce's lightly raced dam Miss Houdini was also a Bo Hirsch homebred, and annexed the 2002 GI Del Mar Debutante at second asking. She has also produced GII Arkansas Derby and GII San Fernando S. winner Papa Clem (Smart Strike). Her most recent produce is the unraced 2-year-old Native Thunder (American Pharoah), a $200,000 KEESEP yearling purchase by Lazy F Ranch. Miss Houdini was bred to Mucho Macho Man and Tamarkuz for 2022. Ce Ce's Second dam Magical Maiden was just a $26,000 2-year-old purchase by Hirsch's father Clement and would go on to take a pair of Grade I races in Southern California and earn more than $900,000 before being sold for $400,000 at the 2000 KEENOV sale.