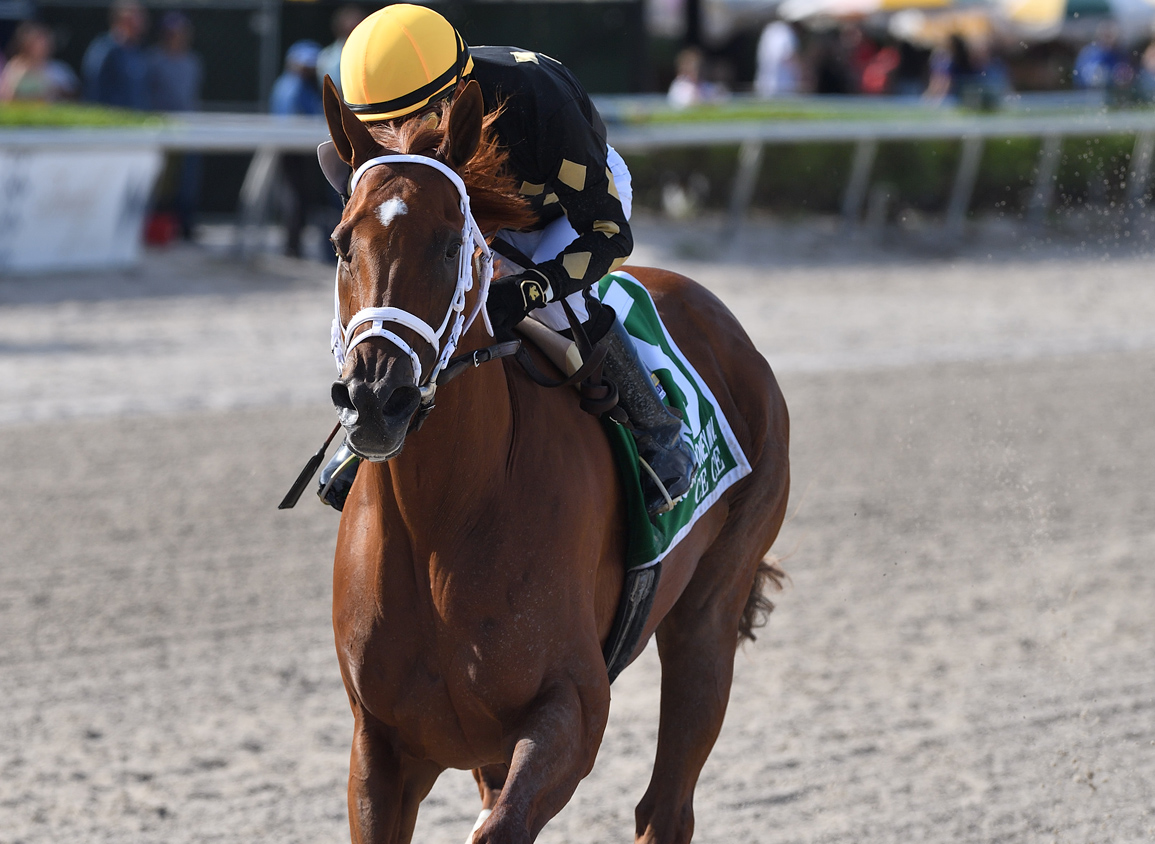 Heavily favored at 2-5 as the pure class of the field, Ce Ce broke alertly, but was content to track from a two-wide third as Make Mischief (Into Mischief) clicked off an opening quarter in :23.01 and half in :45.46. Charging up two wide to take control exiting the bend, the chestnut sailed clear effortlessly to win as she pleased by 6 1/2 lengths. Spirit Wind (Bahamian Squall) completed the exacta and Make Mischief held third.

“I got kind of lucky the outside horse cleared us and I just stocked the leaders. I didn't want to stay too far back today. I wanted to be close to the pace,” jockey Victor Espinoza said. “I didn't want them to sneak away from me, but at the three-eighths I asked her to go and she went on.”

“I told Victor to just bounce on out of there. I wasn't sure what the filly outside of us was going to do. When she ended up catching a flyer out of there, Victor was content to just let her go and sit outside the speed,” trainer Michael McCarthy said. “She did what I expected her to do. Obviously, it's never convenient when you ship all the way across the country, but it's a racetrack that she's fond of. The spacing of the race was great.”

Winner of the GI Apple Blossom H. back in 2020, Ce Ce followed last summer's Rooney win with a third in the GI Ballerina H. at Saratoga and a decisive score in the GIII Chillingsworth S. at Santa Anita in October. She was 6-1 when taking the Breeders' Cup F/M Sprint next out, clinching the Eclipse for top female sprinter. Kicking off this term with a second in the GII Santa Monica S. at Santa Anita Feb. 5, the chestnut beat next-out GI La Troienne S. one-two Pauline's Pearl (Tapit) and Shedaresthedevil (Daredevil)–who came back to win Saturday's GII Fleur de Lis S.–in the GII Azeri S. at Oaklawn Mar. 12. Ce Ce was third in this year's Apple Blossom Apr. 23 prior to this race.

Pedigree Notes:
Ce Ce is a half to MGSW & GISP sire Papa Clem (Smart Strike) and SP Magical Victory (Victory Gallop). She is also a full to SP Stradella Road. A daughter of MGISW Magical Maiden (Lord Avie), the winner's dam Miss Houdini's most recent foal is a 3-year-old colt named Native Thunder (American Pharoah). She was bred in all three years since, but failed to get in foal.