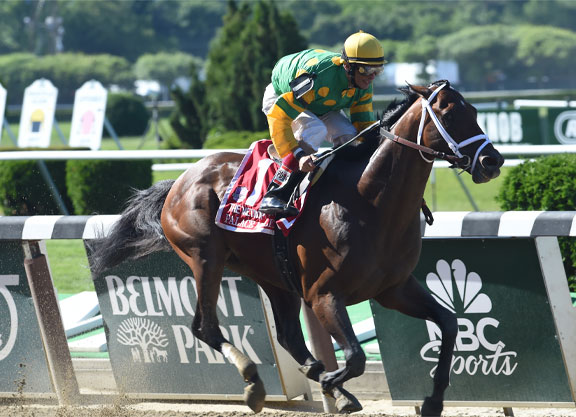 In the battle to attract more European buyers back to the American sales, the weekend's action represented a solid advance. Of the seven turf races at the Breeders' Cup, as many as five were sired by American-based stallions and there was also an American-bred winner, Kameko, of the rescheduled

Of course, Europeans are fully aware of the turf talents of Kameko's sire Kitten's Joy and of the veterans Speightstown and More Than Ready, sires respectively of the GI Juvenile Fillies Turf heroine Sharing and of that remarkable mare Uni, who was such a stylish winner of the GI Mile. The late Giant's Causeway, sire of the Grade I Turf winner Bricks And Mortar, is another with a strong association with success on European turf, with his son Shamardal being responsible for five Group 1 winners in 2019.

It can do no harm that two of the U.S.'s leading first-crop sires, American Pharoah and Palace Malice, also seized a piece of the action. American Pharoah landed the first blow, with his sons Four Wheel Drive and Another Miracle taking first and third places in the GII Juvenile Turf Sprint, before his daughter Sweet Melania finished third, after a bold bid for victory, in the

GI Juvenile Fillies Turf. The turf potential shown by so many of American Pharoah's 20 winners hasn't gone unnoticed in Europe, where Maven became his first Group/Graded winner with his victory in the G3 Prix du Bois in June and Monarch of Egypt became his first Group 1 performer, when runner-up to Siskin in the Phoenix S. Perhaps significantly, Maven's win came on good to soft ground and Monarch of Egypt's Group 1 second was on soft going. With his Breeders' Cup trio shining on the exceptionally fast ground at Santa Anita, it looks as though the progeny of the 2015 Triple Crown winner are admirably versatile when it comes to underfoot conditions.

Palace Malice's son Structor maintained his unbeaten record in the GI Breeders' Cup Juvenile Turf to initiate a fine family double, with Palace Malice's sire Curlin being responsible for Vino Rosso, a decisive winner of the GI Classic. Vino Rosso was following in his sire's footsteps in taking the Classic.

Palace Malice was also following in Curlin's footsteps in siring a major winner in his first crop, a role which Palace Malice played in Curlin's story when he landed the 2013 Belmont S. Curlin, whose previous Breeders' Cup success had come with Good Magic in the 2017 Juvenile, has gradually become one of the U.S.' highest-priced stallions, at $175,000, and his reputation is such that he had eight yearlings sell for $1 million or more this year.

Curlin once finished second to Red Rocks in the GI Man o'War S. on turf and he has been represented by some smart American turf runners, such as the Grade II winners Texas Ryano, Diversy Harbor and Moulin de Mougin. Even so, European owners and breeders have been wary of him, to the extent that he has had only half a dozen runners in Britain and one in Ireland.

Perhaps Palace Malice will fare better in winning European support (though I rather doubt it in our rigidly polarized industries). After all, he has a major British winner – Royal Anthem – as his broodmare sire.

A son of the champion turf performer Theatrical, Royal Anthem was a very tall, leggy horse standing nearly 17 hands. His pedigree reinforced the possibility that Royal Anthem would be a late developer, as both his sire Theatrical and broodmare sire Ack Ack had been at their most effective at the age of five.

To his credit, Royal Anthem proved more precocious, numbering the G2 King Edward VII S. and GI Canadian International among his four successes at three. Predictably, he was even more impressive at four, when he boosted his Timeform rating from 129 to 135. That rise reflected his spectacular performance in the GI Juddmonte International, which he took by eight lengths.

Royal Anthem looked set for another good year when he took the GI Gulfstream Park H. in February 2000, but wasn't able to race again. His main achievement as a stallion was to sire that very good turf performer Presious Passion, winner of the GI United Nations S. in 2008 and 2009 before his second in the Breeders' Cup Turf. However, that gelding's success came too late, as Royal Anthem had been switched to Ireland to cover jumping mares in 2007.

Bearing in mind that Palace Malice ran only twice as a two-year-old, when he won a maiden special weight at Saratoga, he has done well to sire a Breeders' Cup 2-year-old winner in Structor, as well as Crystalle, who contested the Juvenile Fillies Turf following her second to Selflessly in the GII Miss Grillo S.

His bright start is arguably all the more creditable because his racing career ended disappointingly, with just two starts and no victories as a 5-year-old. Consequently, there was a risk that some of the gloss would have been knocked off his glowing record as a 4-year-old, when a victory over Goldencents in the GI Metropolitan H. was part of a run of four straight graded stakes successes.

Fortunately, the anti-climactic end to his racing career seemed not to have any effect when he commenced his stallion career at a fee of $20,000 at Three Chimneys Farm. He started with a book of 158 mares in 2016, but keeping him in the forefront of breeders' minds then proved more difficult, with his 2017 book standing at 117 mares and the following year's at 65. There was a bit of a revival this year, with 91 mares in Palace Malice's fourth season.

Perhaps that revival owed something to Structure, who was bought by Mike Ryan for no less than $850,000 at the Ocala March sale, having been a $160,000 yearling. Another first-crop son of Palace Malice made $550,000 the following month.

Structor is out of a winning sister to More Than Real, who had the distinction of winning the GII Breeders' Cup Juvenile Fillies Turf in 2010. His broodmare sire More Than Ready has a terrific record at the Breeders' Cup, having also scored with Pluck (2010 Juvenile Turf), Regally Ready (2011 Turf Sprint), Roy H (2017 and 2018 Sprint), Rushing Fall (2017 Juvenile Fillies Turf) and most recently with Uni in the Mile. As that list highlights, More Than Ready is tremendously effective as a turf sire, but he has also been represented by such high-class dirt performers as Verrazano, Roy H and the versatile Catholic Boy, who enjoyed Grade I success on dirt and turf). Perhaps Structor, with a dirt horse as his sire, will prove similarly versatile.