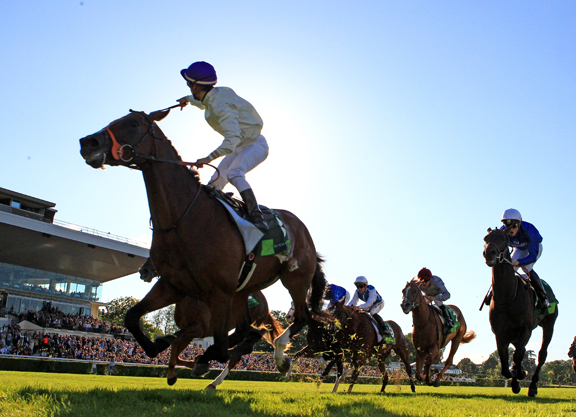 No owner-breeder can be totally happy when a mare or filly culled from their broodmare band goes on to shine for her new owner. The practicalities, though, are that quite a few fillies and mares have to be sold simply to keep an operation’s numbers manageable–especially so if the breeder is keen to keep adding new blood to the genetic pool.

In reality, occasionally letting something worthwhile slip through the net is the best way of ensuring that demand stays high and that the surplus mares and fillies achieve maximum value. In which case, the Aga Khan can expect fierce competition for his superfluous fillies and mares later this year.

In the space of less than two months, sons of these three mares have accomplished an extraordinary sequence of major successes. Hazariya’s colt Harzand won the G1 Derby and G1 Irish Derby, Darkova’s son Almanzor took the G1 Prix du Jockey-Club and now Lidana’s son Mont Ormel has won the G1 Grand Prix de Paris, with all three highlighting the latent Classic potential of the Aga’s wonderful families. Although the Grand Prix de Paris doesn’t officially carry Classic status, it could be considered a truer equivalent to the Derby and Irish Derby than the Prix du Jockey-Club.

Mont Ormel also continued the remarkable success story being enjoyed this year by owner Gerard Augustin-Normand and two of his stallions standing at the Vidals’ Haras de la Cauviniere. Le Havre sired the dual French Classic winner La Cressonniere, who is co-owned by Augustin-Normand, as is Prix du Jockey-Club winner Almanzor. And it was Air Chief Marshal, a son of Danehill Dancer, who sired Mont Ormel in his second crop.

Danehill Dancer is another enjoying a notable sequence of success, in a variety of roles. Directly responsible for Qemah, winner of the G1 Coronation S., the former champion sire has made a considerable impact via his broodmare daughters, with Minding, The Gurkha and Alice Springs all winning at Classic or Group 1 level. Air Chief Marshal follows Fast Company, sire of the G1 Irish 1000 Guineas winner Jet Setting, as the second stallion son to be represented by a major 3-year-old winner this year.

It is fair to wonder how much of these impressive achievements by the Danehill Dancer clan is owed to this year’s miserable weather in Europe (as related so amusingly by Bill Finley in his reports on his recent visit to Jersey).

It has been very wet and it has been cold and the ground has consequently often been on the soft side. Danehill Dancer’s progeny had a reputation for being less inconvenienced by such conditions than most. For example, the Racing Post’s statistics credit him with a 12% strike rate both on heavy and soft, as well as on good/firm. On the other hand, Dansili–another son of Danehill–has only 9% on heavy and 13% on good/firm. Mont Ormel has yet to race on a firm surface and this progressive colt was a wide-margin winner on heavy ground at Compiegne before his unexpected victory on good to soft in the Grand Prix.

Air Chief Marshal himself gained the first of his wins on heavy going and the ground was also heavy when he finished a half-length second in the G1 Phoenix S. He was also smart at around seven furlongs at three, when he easily won over Dundalk’s all-weather track prior to taking the G3 Minstrel S. at The Curragh.

As a speedy son of a high-class 2-year-old, Air Chief Marshal could be considered an unlikely sire of a Group 1 mile-and-a-half winner. It is worth remembering, though, that Danehill Dancer occasionally came up with good middle-distance performers, such as Dancing Rain (Oaks), Legatissimo (G1 Nassau S. and a close second in the Oaks), Planteur (G1 Prix Ganay), Hillstar (G1 Canadian International) and Ave (G1 Flower Bowl Invitational S.)

To do so, Danehill Dancer usually needed a bit of help from his mares. The same could be said regarding Air Chief Marshal’s son Mont Ormel, who was tackling a mile and a half for the first time when he showed improved form to take the Grand Prix.

His dam Lidana showed that she stayed an extended mile and a quarter after gaining her only win over seven furlongs as a juvenile. She shares the same sire, the G1 2000 Guineas winner King’s Best, as the Derby and G1 Arc winner Workforce, the G1 Japanese Derby winner Eishin Flash and the G1 Irish St Leger winner Royal Diamond.

The idea that there must be stamina in Lidana’s pedigree is supported by the fact that her versatile half-brother Linngari won the G1 Grosser Dallmayr Preis Bayerisches Zuchtrennen over a mile and a quarter, even though he was by the sprinter Indian Ridge.

The most obvious source of stamina is Kahyasi, sire of Mont Ormel’s second dam Lidakiya, a useful winner at up to a mile and a half. Considering that he won the 1988 Derby and Irish Derby, Kahyasi probably didn’t receive the respect he deserved from breeders other than the Aga Khan. The Aga, though, reaped some impressive benefits from his stallion, including Zainta (G1 Prix de Diane), Khalkevi (Grand Prix de Paris), Vereva (Prix de Diane) and Enzeli (G1 Gold Cup at Royal Ascot). Enzeli wasn’t Kahyasi’s only Group 1 winner over two and a half miles, as he also sired that grand gelding Kasbah Bliss, who numbered the G1 Prix du Cadran among his many successes.

Kahyasi, of course, eventually earned considerable respect as a sire of broodmares, principally through the exploits of Hasili, a Broodmare of the Year whose first six foals all won at Group 1 or Group 2 level. Several other daughters also excelled, producing the likes of that exceptional filly Zarkava and the Group 1-winning fillies Again (G1 Irish 1000 Guineas) and Promising Lead. For the record, with Kahyasi as her sire and Doyoun as her broodmare sire, Lidakiya was bred to the same pattern as Zarkasha, the dam of Zarkava.

It is also necessary to mention that five of Hasili’s group winners–Dansili, Banks Hill, Intercontinental, Cacique and Champs Elysees–were by Danehill, as is Promising Lead, while Again was by Danehill Dancer. Mont Ormel is therefore by no means the first important winner to have a pedigree featuring Danehill and Kahyasi.

Mont Ormel’s fifth dam, Licara, was a half-sister to three high achievers in Acamas and the brother-and-sister team of Akiyda and Akarad. Acamas, a son of Mill Reef, won the Prix du Jockey-Club, while Akiyda landed the Arc and Akarad the Grand Prix de Saint-Cloud. The family still has a toehold in the Aga Khan’s broodmare band, in the form of Lidana’s unraced half-sister Lidaya, an Elusive Quality mare who has youngsters by Dalakhani and Myboycharlie.